It would be easy to dismiss “Two Plains & a Fancy” as something trivial, a 90-minute excuse to go camping in petticoats and capture the events that follow and the Colorado scenery alike on beautiful 16mm. At times, that’s exactly what it looks like. It would be equally easy to treat it as a sort of profound 90-minute haiku, plenty of spaces left between images and words with the intent that the audience should fill those gaps with its own ruminations on history, mysticism, exoticism, mortality, spirituality, and the movements of the spheres and the tectonic plates alike. At times, it’s exactly that as well. But to fall into either extreme is to risk one of two equally unsatisfying fates: Inflate its profundity, and you’re part of the joke; Dismiss its pleasures and layers, and you’ll miss a strange and sometimes rewarding experience.

Whitney Horn and Lev Kalman’s (“L for Leisure,” “Blondes in the Jungle”) meandering 1890s road movie follows Milton Tingling, a scarf-collecting watercolorist dandy (Benjamin Crotty), Ozanne Le Perrier, a French geologist (Laetitia Dosch), and Alta Mariah Sophronia, a confidence woman turned mystic (Marianna McClellan) who perhaps hasn’t given up the life of the huckster entirely. After meeting on a train, the three set out in search of the best and most natural spas in the wilds of Colorado. Over the course of a four-day adventure, their destinations grow increasingly remote, guided as they are by freshly-painted signs, rudimentary maps, metaphysical time-travelers, the lichen on rocks, ghosts, the list goes on. That’s the plot, such as it is. The conflict, such as it is, emerges when the two women in the party occasionally butt heads about science and the spiritual realm, though conflict is probably too strong a word, given the mystic’s scam-artist tendencies and the scientist’s occasional use of terms like “psychophysics.”

To call such a story under-developed is to assume that the filmmakers were shooting for something more weighty and just couldn’t get there for one reason or another. That’s not “Two Plains & a Fancy.” This is a film that lives exactly where it lives. That’s perhaps most evident in the production and costume design. When the three spa-goers arrive outside the small mining town that begins their journey, they’re greeted by several signs, freshly painted on machine-cut two-by-four, that read simply “TOWN,” with an arrow pointing them straight. Every sign throughout Colorado looks exactly the same, albeit sometimes with a slightly more romantic brushstroke (as in the one that says, “FANCY PROVISIONS,” with some curvy flair). There’s no sense of being dropped into the past. It’s all self-aware artifice. When they encounter a rancher (Michael Murphy) who Alta Mariah cons for horses and then guiltily and bashfully undeceives, he’s wearing contemporary blue jeans and a very modern bemused expression; their awkward tête-à-tête is interrupted when Milton asks if they can rent “I don’t know what you call it … Luggage for horses?” with an American Express card.

It’s “Picnic at Hanging Rock” as told by a series of hip hop skit tracks, only instead of being on a Wyclef Jean album, it’s actually one by Band of Horses or Bon Iver. The emotional impact here doesn’t spring from any emotional investment in the characters or their relationships; there’s simply not enough there there for that to be possible (though Crotty’s engaging, winningly affected performance does sometimes threaten to tiptoe over the line that separates sketch from story). Instead, between moments of surreality and buffoonery, cinematographer Horn and composers John Atkinson and Talya Cooper create a creeping, occasionally overwhelming sense of dread. These landscapes aren’t the stunning expanses of the Great Unknown typical to the western film. Instead, it’s a collection of geological phenomena, complete with crevices and cliffs destined to take the characters farther and farther away from the conveniences three such city slickers would need for survival and closer and closer to that which dwarfs all of us.

That’s the tension that percolates up to the surfaces, like the heat and air that create the hot springs so sought after by the spa-goers. The hypocrisy, naivete, vanity, and foolishness of the trio would seem to be the things that doom them—but time, the stirrings of the earth, and the endless surprises of nature doom all of us in time, and really, how doomed can any one person be? The best moments in “Two Plains & a Fancy” spring from this place precisely. The solemn declaration that a stream unmarked on a map be named “The River of Dreams” leads to a memorably no-nonsense pratfall, and to a medical crisis that can involves scrapes and scarves. On arriving at the spa recommended by the time-travelers, they find it already populated by crocodiles—“It’s infested with dinosaurs!” the geologist moans. A seance outside an abandoned whorehouse leads with perfect seriousness to what can only be described as a ghost orgy, captured with more ethereal cinematography than such an event might seem to warrant. And when the metaphysical visitors arrive (one also played by Crotty), Milton explains away the perceived threat by telling his friends that they’re time-travelers, not ghosts. “There’s no such thing as a future,” Le Perrier responds.

It’s actually the ghost orgy scene that’s best seen as a compass rose with which to view this film. As it reaches its climax (pun intended) a lit candle moves vigorously and rhythmically into another and millimeters away from a gauzy curtain. Take the proceedings too seriously, you may view it as a fire hazard, yet another instance in which the folly of these travelers brings them close to peril. Dismiss the whole as a slight gag that’s overstayed its welcome, and you’ll miss the possibility that the two candles are also caught up in all that sexy ghost energy, and that the moving candle is enthusiastically pumping away at the other. Assume those candles will play any significant role moving forward, and you’ll wind up disappointed. Take the moment for what it is—candles, maybe mid-coitus, that might burn down a ghost whorehouse and won’t be seen again—and you’ve got a hell of a thing. Slight, maybe. Empty, no. Dull, sometimes. Enjoyable, absolutely. 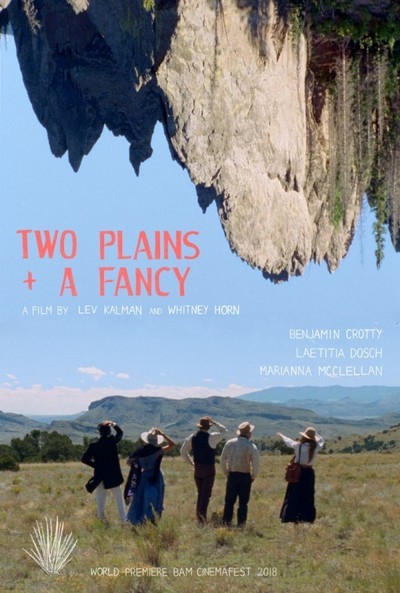