It’s hard to shake the feeling that “True Story,” Kevin Hart’s seven-episode Netflix dramatic mini-series, exists because of what happened to the stand-up comedian around the 2019 Oscars. If you remember, he was announced as the host of the event but then forced to step down after some homophobic tweets and stand-up bits surfaced. Three years later, Netflix has launched a series about a fictional version of Hart who makes some much bigger mistakes than the real one, of course, but the show lands in a tone-deaf place about cancel culture and how we never really know what’s going on behind the scenes in a celebrity’s life. It almost feels like "If you thought my tweets were bad ..." Worse than the funhouse mirror reflection of reality is the fact that this drama doesn’t have enough meat on its bones for seven (eight, really, since the first episode is double-length) chapters of television, and the story it does tell never once feels, well, “true.”

The typically likable Hart attempts a change of pace here as the Kid, a Philly-raised stand-up (like Hart) who returns to his hometown for a show and reunites with his troublesome brother Carlton (Wesley Snipes, so consistently the most interesting thing about this show that he almost makes it worth watching on his own). Carlton and Kid have had conflicts in the past (again, like Hart and his real brother) but seem to be getting along now, even if the older brother demands he have a “V.V.I.P. Room” backstage. That’s where the trouble starts as Carlton pushes Kid off the sobriety wagon, and the celebrity wakes up next to the body of a dead woman after a night of partying.

Carlton knows what to do. He calls a fixer named Ari (a very fun Billy Zane) to clean up the mess, but, of course, nothing goes as planned. Ari has some sociopathic brothers (John Ales and Chris Diamontopoulos) who get involved as “True Story” mostly consists of Carlton and Kid trying to clean up messes and making bigger ones in the process. It doesn’t help that Kid can’t really go to his regular support team, including manager Todd (Paul Adelstein), bodyguard Herschel (William Catlett), and writer Billie (Tawny Newsome), or that he’s dealing with a public and messy divorce. When a fan (Theo Rossi) gets involved, things get even uglier, and way cloudier in terms of what Hart and creator Eric Newman (“Narcos”) think they’re saying about the dynamic between celebrities and those who love them the most. (Fans in this show are presented as stalkers or idiots, such as one who encounters Hart on a plane and decides it's fine to repeat a racist bit back to him.)

One of the biggest problems with “True Story” is how it often feels like it wants to have it both ways in terms of how we’re supposed to feel about Kid. I don’t need a show to give me a moral roadmap, but I also don’t like it when it feels like the creators are indecisive about a character’s motivations. Is Kid a good guy caught up in a bad situation? Given some of the choices he makes, not really. He’s kind of a selfish jerk who values his career and safety over everything else. Imagine if “True Story” really leaned into that, presenting a celebrity whose entire value system has been crushed by the spotlight. There are times when it threatens to become that dark and way more interesting but then it pulls back, wanting us to see ourselves in Kid when almost no one would make some of the violent, selfish decisions he makes here.

It doesn’t help matters that “True Story” is another one of those streaming era ventures that should have been a Sundance feature film. It has a habit of introducing supporting characters who may as well be wearing signs that say, “We have no idea what to do with this person.” The most egregious example is Newsome’s Billie, who feels set up as a possible future star, someone who may someday have Kid opening for her instead, but then just disappears into the background. Adelstein, Diamontopoulos, and Ales are one-note. Only Snipes comes out blazing, finding wonderfully subtle beats to play in a show that very rarely feels anything less than superficial. He is such a charismatic and fascinating actor that he holds even the least believable scenes together.

Most of all, there’s just not enough realistic human behavior here in a story that relies on coincidence and deep suspension of disbelief (especially regarding phones that are never locked nor uploading anything to a cloud). It is interesting to see Hart play unlikable and the show gains steam when he allows Kid to be a jerk, making one wish he could play a true anti-hero or even a villain in a future Netflix drama. Or, you know what, let’s give that show to Wesley Snipes instead. 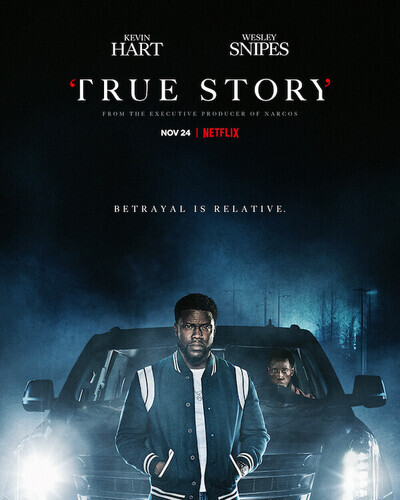