Though many bad movies are simply depressing, Adam Smith’s “Trespass Against Us” is so exceptionally bad that it at least has this bright sidelight: Unless 2017 turns into a truly disastrous time for movies, it may be the worst of the year is already here.

Given that it left last fall’s Toronto International Film Festival trailing a sheaf of negative notices, with one trade reviewer calling it “without a doubt the worst film I’ve seen” at the festival, the question naturally arises: How does such a stink-bomb of a movie even get into a top-drawer fest like Toronto?

One likely answer: Michael Fassbender. Though he’s built a formidable career veering between cartoon-franchise blockbusters and far more artistically ambitious projects, including the three films he’s starred in for Steve McQueen, the actor evidently likes to stay busy—or perhaps likes to help untalented filmmakers—because he also lends his talents to projects that aren’t worthy of them. 2015’s “Slow West” was one. “Trespass Against Us,” though, may take the cake as the most completely ludicrous.

While the filmmakers had obvious commercial reasons for including him, Fassbender, from a purely artistic angle, is spectacularly misplaced. The movie concerns an extended crime family of Anglo-Irish vagabonds in contemporary rural England, and most of the characters are the grungiest of low-lifes. In this context, Fassbender is a like a tulip in a field of turds. Granted, the guy can’t help that he looks like a Nordic god. But he and the director could’ve made an effort to integrate him with the dramatic surroundings; they don’t.

This results in a contrast that’s unfortunate for the actor. The other name in the cast, Brendan Gleeson, plays the father of Fassbender’s character. This guy may be the most odious of human beings—smarmy, sanctimonious, manipulative—but Gleeson brings him to life. It’s a sharp, nuanced and believable performance, next to which Fassbender seems to be walking through a role that he’s not given a moment’s thought to.

The movie’s main set is a trashy caravan park where the characters live like pigs, drinking, trashing the countryside and, for sport, chasing rabbits in their beat-up cars. Although the context seems inimical to any kind of settled family life, Chad Cutler (Fassbender) and his wife (Lyndsey Marshal) are rather improbably trying to maintain something of a normal existence for their two kids, who attend school and wear uniforms that set them aside from the ambient grubbiness.

Realizing that he can’t give his closest kin any real normalcy unless he escapes the criminal life and his domineering dad, Chad makes a few feeble motions toward leaving the caravan park, which gives the film’s shapeless story a few hints of dramatic purpose and direction. But these end up going nowhere, and most of the film just follows the characters as they hoot, holler and ride around in their crummy cars.

The tale’s automotive aspects seem designed to give it the momentum that the drama so blatantly lacks—the car chases offer precious little excitement but arrive with the regularity of shoot-outs in a formulaic gangster film—and they entail one of the film’s most risible elements, its portrayal of the police as almost entirely inept, failing to apprehend or arrest Chad and his gang at even the most opportune times.

Overall, the film’s attitude toward officialdom has a curious Englishness that Americans may find laughably absurd. In one scene, Chad will be eluding the cops or killing the beloved dog of one. In the next, he and his wife go to the police boohooing because their kids haven’t come home from school. Likewise, there’s a scene where they cast angry accusations at a sympathetic teacher who’s reluctantly expelled the kids due to their truancy, for which of course the parents are primarily responsible. More than petty criminals, the Cutlers are pouty narcissists, expecting help from the government even while flouting its laws.

All things considered, Alastair Siddons’ script must be counted the lamest in recent memory. Whether or not they’re based on real-life people, the characters he creates are contrivances who, Gleeson’s toxic patriarch apart, rarely attain a shred of believability. First-time feature director Smith, who has a background in television and music videos, contributes little beyond a facile naturalism in his TV-style visuals.

A film like this needs sociological credibility, artistic distinction or, at the very least, interesting, engaging characters. Lacking all of the above, the thoroughly unpleasant “Trespass” does indeed trespass against its audience, ending up more endurance test than entertainment. 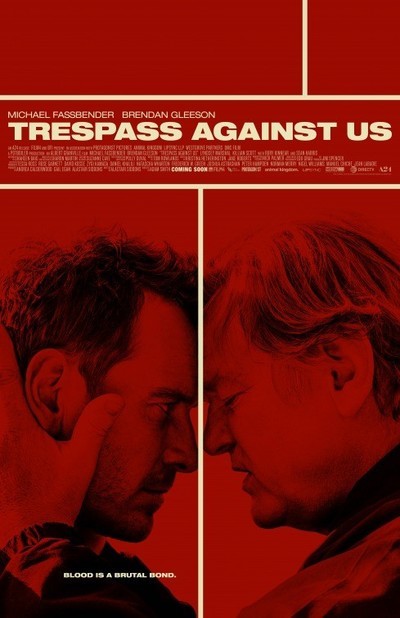