Biopics often struggle with this same thing, how to portray the "good to spend" days of its subject, while gravitating towards the "gruesome." "Tolkien," directed by Finnish filmmaker Dome Karukoski (“Tom of Finland”), with a script by David Gleeson and Stephen Beresford, does a fairly good job of balancing the "good to spend" with the "gruesome," setting up the various influences and inspirations working on John Ronald Reuel Tolkien, a linguistic prodigy who would end up writing some of the best-selling fantasy books of all time. Flip-flopping back and forth between Tolkien's orphaned childhood/schooling years and a prolonged imagining of his experience during the Battle of the Somme in 1916, "Tolkien" approaches its subject with maybe a little bit too much reverence, but shows an interest in the development of Tolkien's ideas, his passion for philology (not the most cinematic of subjects), his love of myths and legends. The Tolkien estate has distanced itself forcefully from "Tolkien," without having seen the film. There's not much here to object to, although certain things are missing entirely (Catholicism, anyone?) As an origin story, "Tolkien," has its moments of clarity and emotion. Some of it is oversimplified, even misguided. But the film cares about its subject, and cares about finding ways to portray "things that are good and days that are good to spend."

Young Ronald (Harry Gilby) is first shown playing with swords during his idyllic childhood in Sarehole village. His love of myths is passed on to him from his mother Mabel (Laura Donnelly), who regales her two sons with stories of dragons and knights and gold. When Mabel dies, Ronald and his brother are orphaned, and become wards of Father Francis Morgan (Colm Meaney), who places them in a boarding house for children in similar circumstances. After a bumpy start at school, Ronald finds himself with three best friends, Christopher Wiseman (Ty Tennant), Robert Gilson (Albie Marber) and Geoffrey Bache Smith (Adam Bregman). They gather at Barrows after school and talk about their artistic pursuits, calling themselves the T.C.B.S. (Tea Club, Barrovian Society). This is the formation of Tolkien's cherished "fellowship," underlined by sweeping music in case you missed the connection. The young actors create a believable bond, as do the group of older actors who portray them once they reach college college (Nicholas Hoult, with intense blue eyes and sharp cheekbones, as Tolkien, Anthony Boyle as Geoffrey, Tom Glynn-Carney as Christopher, and Patrick Gibson as Robert).

Since these sequences are intercut with Tolkien a couple of years down the road, staggering through the trenches in France looking for Geoffrey through mounds of dead bodies, the burgeoning friendship of the boys has a feeling of "the doomed" about it. In the preface to the second edition of The Lord of the Rings, Tolkien wrote, "One has indeed personally to come under the shadow of war to feel fully its oppression; but as the years go by it seems now often forgotten that to be caught in youth by 1914 was no less hideous an experience than to be involved in 1939 and the following years. By 1918 all but one of my close friends were dead." "Tolkien" captures this really well.

Tolkien's romance with Edith Bratt (Lily Collins), another orphan living at the boarding house, leads to one of the highlights in the film, a long scene where the two converse about language, arguing about meaning vs. sound. This scene loops in the famous "cellar door" concept, beloved by Tolkien ("cellar door" is beautiful to say and hear, separated entirely from what it means). The script really digs into "cellar door," giving Edith's character some "oomph" in the process, while also managing to be a coiled-up late-Victorian-era love scene, the passionate meeting of two minds. The scene doesn't feel like a box being checked off towards a predestined result. It's really about something. Later, in another fun sequence, Edith introduces Tolkien to Wagner's "Ring Cycle" in an extremely unconventional way, providing some context to another one of Tolkien's inspirations. Derek Jacobi shows up as Joseph Wright, the eccentric philology professor at Oxford who takes Tolkien under his wing, spouting a long monologue about the word "oak." "Tolkien" is a movie about people who think about things. You buy it.

On the flip side, the framing device of the Somme battle, dragging on endlessly, is where "Tolkien" goes awry, repeatedly. Tolkien's determination to find Geoffrey, all with the help of a soldier named Sam, devolves into hallucinatory scenes where Tolkien literally "sees" dragons and what would eventually become the Eye of Sauron and the Nazgûl, unfurling across the hellscape of No-man's-Land. This is a very reductive approach to literature (as well as the artistic imagination of Tolkien) and it has a couple of unfortunate results. First of all, any visual representation of these things will inevitably draw comparisons to Peter Jackson's film adaptations of Tolkien's books. Worse, presenting the Somme as explicit "inspiration" for Tolkien's magical world ends up diminishing both the battle and the books.

If you're "into" Tolkien, you know the deep pool of fascination. He himself got bogged down in the works that made his name. When his publisher wrote him in 1938 to ask how the sequel to The Hobbit was coming along, Tolkien replied that the work was flowing but also "getting quite out of hand." His creation was running amok! Until the end of his life, he carried on correspondence with fans from around the world, answering their questions about Orcs and free will and the Elvish language, going on for 20 pages at a stretch. Many of these letters were never sent. They sat in desk drawers as piles of unfinished drafts. Reading the correspondence, you get the feeling that he is not really the the creator of Middle Earth. It's more like he is the lead excavator in an ongoing archaeological dig. That's what's so fascinating about him, how deep his creation went in him. I'm not sure it's possible to capture this on film. 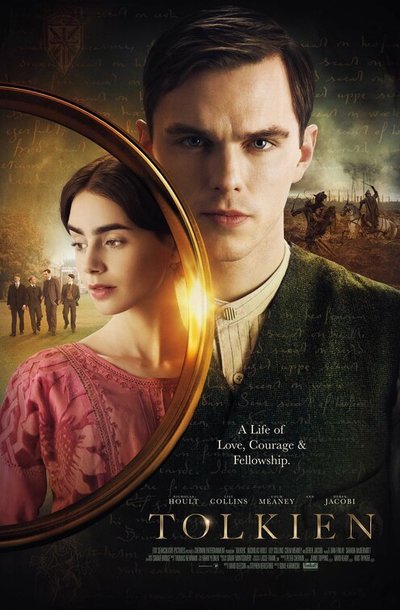 Rated PG-13 for some sequences of war violence.