It's interesting to note that the nutty-go-crazy, vampires-versus-yakuza action-comedy "Yakuza Apocalypse" was released two weeks before the post-apocalyptic hip-hop musical "Tokyo Tribe." Both films serve as post-disaster rallying cries—while "Yakuza Apocalypse" is set in a post-Tōhoku-Earthquake world where only mutants and monsters are hardy enough to survive, "Tokyo Tribe" is set in a post-civilized city ruled by gangs that ultimately must form a surrogate family. That may sound sappy, but "Tokyo Tribe," an adaptation of a popular Japanese manga, is bound to charm viewers—both the uninitiated and the diehard fans of director Sion Sono ("Why Don't You Play in Hell," "Love Exposure")—with its boundless energy ... for a while, anyway.

Sono's shambling, discursive martial arts comedy plays out like a loose, narratively-united series of blustery musical set pieces that mash up elements from earlier films ranging from "West Side Story" to "Sin City." The film's rap video aesthetic brims with Roman candles, graffiti murals, golden weapons, and writhing, half-naked groupies. And the film's gallery of "The Warriors"-style gangs all have their moments. But you will have to roll with the film's giddily excessive style if you want to enjoy "Tokyo Tribe." It's an infectiously over-the-top and unquestionably idiosyncratic mess, but it only holds together for as long as you're impressed by its commitment to an admittedly novel premise.

"Tokyo Tribe" revolves around the various gangs that have taken over an always-raining, neon-lit Tokyo. This is a city run by chest-puffing groups like the Kabukicho Gira Gira Girls, a pack of self-sufficient prostitutes, and the Nerimuthafuckaz, a group of boastful guys that really like saying their name. Ruling over them all is Boss Buppa (Riki Takeuchi), a gold-suit-wearing don with two neurotic sons, a harem of imprisoned women, and a beat-boxing vassal. Buppa's kingdom looks like a hip-hop version of Pleasure Island from "Pinocchio," except no children are transformed into donkeys. Instead, there's just a never-ending parade of competitive chest-puffing that doesn't cohere into a narrative-like imperative until the Waru Clan comes out of nowhere, and threatens the gangs' tentative status quo.

You can tell that the Waru clan is a disposable threat because their rivals are only able to identify Waru members based on their apparel ("That's what it said on their shirts"). But Sono is much more interested in Buppa and his wacko spawn. Nkoi (Yôsuke Kubozuka) is a decadent, pan-sexual Caligula wannabe whose private chambers is full of human furniture that looks a lot like the fixtures in "A Clockwork Orange"'s Moloko Milk Bar. And Mera (Ryôhei Suzuki) is a bleach-blonde muscleman with abs for days, and an irrational hatred of Kai (Young Dais), the Musashino peace-and-love-espousing gang leader.

Kai is thankfully not Sono's real focus either. Instead, "Tokyo Tribe" restlessly flits from one warring faction to the next because its creator is more enamored of his film's world than his characters. That unfocused approach mostly pays off because Sono is typically capable of conveying his fascination with his characters through roving tracking shots, and Byzantine plot convolutions. "Tokyo Tribe" works because you'll follow these characters for a while—and find yourself investing in their world—without ever really caring about their boisterous claims of being turf-taming badasses, and irresistible womanizers.

Even this last point is expressed well enough in sleazy/erotic scenes like the one where a newbie policewoman is stripped, and given a rundown of the various gangs while she's teased at knifepoint. Sono doesn't make any great claims to feminist critiques in "Tokyo Tribe," which makes the film's roving, objectifying eye that much more ... well, palatable. Big-breasted bimbos and unhappy sex slaves co-exist without one group perfunctorily trying to depose the other. Sure, some Gira Gira Girls kick ass, and other female protagonists enjoy some good screen time, particularly Sunmi (Nana Seino), one of Mera's prostitutes. But Sono's film is set in a world of fallen values, as is evident by the "Fuck Da World" motto that looms large in Buppa's lair. Sono accepts that, and just rolls with it.

Viewers of "Tokyo Tribe" will thankfully find the film to be more palatable than its more garish, exploitative elements. It's a bratty, violent tribute to characters whose ability to bond with each other is inevitably discovered through their common source of empowerment: hip-hop music. As usual, Sono doesn't judge his characters for dreaming of life in a rap-battle-style music video, but rather just tries to visualize what he finds most compelling about them. "Tokyo Tribe" is, in that sense, a refreshingly loose, rowdy and unpretentious tribute to a new generation of disaster survivors. 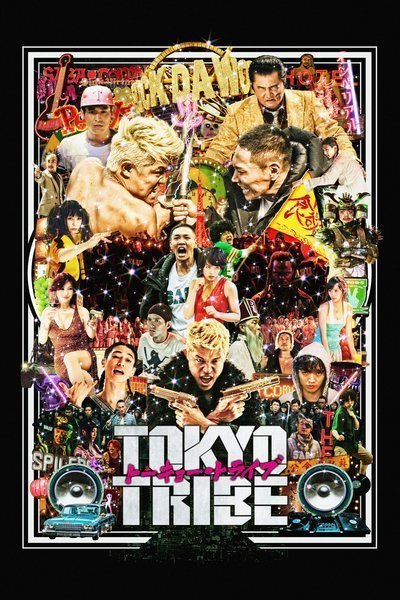