It’s hard out there for Maggie Richmond (Liana Liberato), the feisty new girl in a sleepy and deeply conservative Oklahoma town of the early 1960s. And under the servicable direction of Martha Stephens (“Land Ho!”), debuting screenwriter Shannon Bradley-Colleary’s LGBTQ coming-of-age drama “To the Stars” is refreshingly patient with revealing to the audience why. Through beats that are conventional but sincere, we get introduced to this mysterious gay young woman and her past in due course, both on her own terms and through the eyes of the awkward recluse Iris Deerborne (Kara Hayward of “Moonrise Kingdom” and “Manchester by the Sea”), her high school’s resident picked-on outsider.

The setting is open and airy, but cinematographer Andrew Reed captures the imprisoning vista with all its suffocating bleakness, juxtaposed against the era’s doo-wop ballads, candy-colored outfits and bright red lips. (This critic did not see “To the Stars” at Sundance last year where it premiered in black and white, but the decision to release the film in color feels like the right artistic choice that accentuates these thematic contrasts.) Meanwhile, writer Bradley-Colleary’s narrative establishes the lead characters as equals, giving both females ample room to grow and change, even when the scribe indulges in mechanical and predictable twists and turns from time to time.

Iris leads the way in the story that appealingly veers into melodrama territory by the third act—on a deserted country road at the start of the school year, we witness the clumsily dressed and bespectacled senior student get bullied by numerous toxic boys who humiliate her. Coming to her rescue with a handful of stones she’s not afraid to throw is no other than Maggie. On the heels of this unpleasant incident, the lively and feminine Maggie and the shy and unconventionally styled Iris build a genuine, defiant friendship. Slowly but surely, they welcome each other into their respective worlds, taking nighttime swims in a secluded pond, and so on. Their camaraderie blossoms further amid a group of well-developed side players; either hopelessly backwards and unsympathetic adversaries or those pushed into silence by circumstance.

Belonging in the former group are various small-minded mean girls and gossipy townsfolk the worldly Maggie quickly learns how to manipulate through lies. For starters, she claims that her dad Gerald (Tony Hale) is a Life Magazine photographer, shooting the likes of Marilyn Monroe for work. When in truth, he just works for an unglamorous agriculture magazine and has recently relocated Maggie and his wife Grace (Malin Akerman) from the big city to Wakita’s suburbs to keep his daughter away from the so-called bad influences of the metropolitan lifestyle; factors he blames his daughter’s homosexuality on. In segments brutal and unforgiving, Stephens gives the viewer glimpses of the kind of emotional and physical abuse Maggie is subjected to—beaten by her dad, unsupported by her kindly but helpless mother, told by religious figures in the past that her homosexuality can be “fixed.”

Among the latter group of the above-mentioned women (those who are shushed by a traditional culture and blatant bigotry) is Iris’ hard-drinking mother Francie (Jordana Spiro), who mourns her wasted youth and good looks and torments her disinterested daughter by trying to doll her up. Also in this clan is the town’s guarded hairdresser Hazel (Adelaide Clemens), a closeted lesbian who grows an affection towards Maggie; the kind of scandal small-minded Wakita dwellers would not tolerate. But the word of their eventual tryst gets out nonetheless, leading the way to inevitable heartbreak.

Even though her at-times heavy-handed writing gives away more than it should, Bradley-Colleary deserves all the credit for leaving the resolution open ended and selling all the possible outcomes to the audience with equal plausibility. Lead performances also do considerable heavy lifting—Hayward strikes a mature balance between a reluctant hermit and a confidently transformed young woman, making her Iris something a lot more than the cliché she could have been; you know, the tongue-tied yet secretly gorgeous girl who eventually removes her oversized glasses. Similarly, Liberato infuses the film with a great amount of zeal. “To the Stars” doesn’t reinvent the coming-of-age wheel and maybe isn’t a major entry to the lesbian film canon compared to the likes of “Carol” and “Portrait of a Lady on Fire.” But there is still an undeniable earnestness to this modest period effort that prioritizes misunderstood women and female friendships; still a bizarrely rare beast in cinema, somehow. 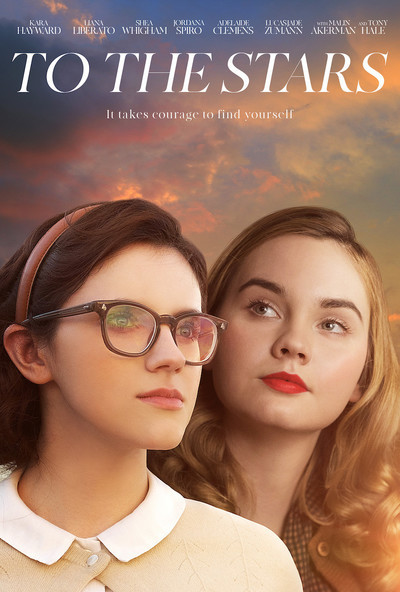