"Thunder Force" takes place in current-day Chicago, where the citizens struggle in the aftermath of a 1983 cosmic-ray blast, which turned sociopaths and criminals into lethal villains wielding deadly superhero-like powers. They are called "Miscreants" by the cowed and helpless populace. The Miscreants have wreaked havoc ever since, and regular human beings are powerless to stop them. Lydia (Melissa McCarthy) and Emily (Octavia Spencer), best friends in grade school and then estranged for many years, team up to combat the Miscreants, using a genetic soup-formula developed by Emily over a painstaking years-long process, which can be injected into "regular" people, giving them superhero powers as well. Written and directed by Ben Falcone, "Thunder Force" is also a kind of genetic soup, a mish-mash of different genres: buddy comedies, buddy dramas, girl-power superhero movies. With such powerhouses as McCarthy and Spencer at the helm, it's a surprise that so much of the film is inert, rote, conventional.

When Lydia and Emily come back into each other's lives after childhood, Emily has risen to the top of her field as a geneticist and CEO of her own company. Lydia works a forklift. When Emily doesn't show up to the high school reunion, Lydia is devastated, and goes to Emily's gleaming corporate offices, determined to drag her friend back to the party. This is their childhood all over again: Emily was studious, Lydia was a bruiser. It worked in childhood, but not so much as an adult. Lydia is told not to touch anything in the offices, but Lydia does, accidentally injecting herself with half of the superhero-genetic formula, the one that will make someone super, super strong. Lydia did not sign up for this, and neither did Emily. Emily is enraged, but there's nothing she can do. She takes the other half of the genetic formula, the one that will make someone invisible.

Then comes the training montage, as they both get comfortable with their new powers. Meanwhile, a mayoral race heats up in Chicago. One of the candidates is nicknamed "The King" (Bobby Cannavale), and he is an openly evil thug, strutting around in suits that make him look like he stepped out of a Damon Runyon story. The King is in cahoots with the Miscreants, one in particular, named Laser (Pom Klementieff), whom he sics on his perceived enemies. Lydia and Emily name themselves "Thunder Force," go on a couple of trial runs, before setting their sights on taking down The King. Lydia gets side-tracked by a flirtation with a half-Miscreant named Crab Man (Jason Bateman), who has no visible superpowers, unless you call awkward crab-pincer arms superpowers.

All of this is very standard and none of it is particularly interesting. Watching CGI-generated McCarthy and Spencer flipping and twirling through the air attacking their enemies is not my idea of a good time. What is my idea of a good time, however, is watching them develop a relationship, watching them make each other laugh, watching them act together. They're great together. That's the draw, the two of them. There's not enough of it. By comparison, "The Heat," where McCarthy played a volatile unpredictable FBI agent partnering with the prim-and-proper rules-following Sandra Bullock, used specific genre scaffolding mainly to let the two actresses run wild within that structure. Every scene features goofy schtick, and the crime they investigate is somewhat irrelevant. The only game in town is their chemistry as actors. "Thunder Force" doesn't allow for that.

The best moments in "Thunder Force" are actor-generated, the loosey-goosey "riffs" in between hurtling plot points. McCarthy has one very funny riff on Joe, the guy in accounting, and the button of the moment is Spencer's deadpan response. There's one long sequence where McCarthy does an imitation of Jodie Foster in "Nell" and nobody in the room has seen it and they all think she's gone insane. There's a fun bit when Spencer tries to say "Thunder Force" and make it sound badass, with coaching from Lydia. Bateman's dry humor is present in every moment, and his gift is in playing things totally straight, especially in beyond silly moments when he attempts to pick up his martini glass with crab-pincers. There's one recurring bit where McCarthy and Spencer, encased in superhero armor, try to pull themselves out of a tiny purple Lamborghini. The whole movie stops to watch them laboriously extricate themselves from the automobile. "Thunder Force" needs more of this.

Taylor Mosby is very good as Tracy, Emily's brainiac daughter, a Stanford graduate at 15, and now in charge of her mother's lab operations. Lydia barges into Tracy's life, and assumes the role of a laid-back aunt. There are some nice mother-daughter scenes as well, where Emily wonders if she's been too hard on her daughter. Both were taunted about being "nerds," and the family mantra is: "I'm not a nerd. I'm smart. There's a difference."

The movie comes to life any time the actors are given space to mess around. It's just not enough to hold the whole thing together. 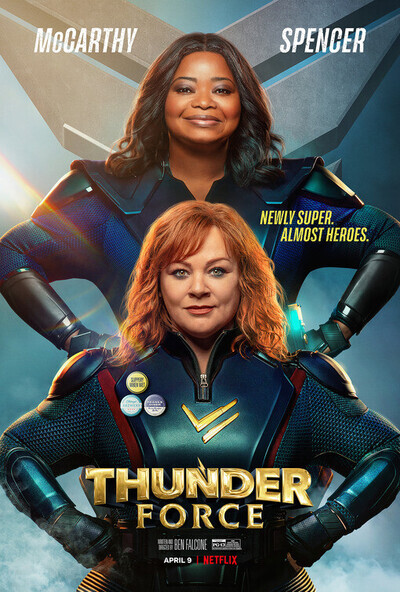 Bobby Cannavale as The King