This is Not a War Story

Every so often, I will see a narrative feature film and think to myself that it might have made for a more rewarding work if the subject had been given the documentary treatment instead. “This Is Not a War Story” actually tests that particular hypothesis, and proves it to be true by blending together documentary-style material that's absolutely spellbinding and heartbreaking with more conventional dramatic moments that, despite the care and intelligence driving them, lack some of the urgency and authenticity of the other material. The result is a film that is a somewhat uneven journey, though one that proves to be ultimately rewarding in the end.

"This is Not a War Story" is centered on the plight of members of the U.S. military who have returned from their tours of duty, and who have not been able to fully process their experiences and the lingering aftereffects for their physical and emotional wounds. Sure, they can get meds for their injuries, and therapy for the PTSD, and there always seem to be people willing to thank them for their service. But in many cases, that's not nearly enough. This is clearly the case with Timothy (Danny Ramirez), who is the focus of the film’s spellbinding opening moments that follow him as he restlessly roams about the New York subway system, popping pills and occasionally wandering a little too close to the edge of the platform, before dying in his seat. His passing is not even noticed until the train comes to the end of the line.

One person who does register Timothy’s death is Will (Sam Adegoke), another veteran who had served as his mentor. Rattled by his friend’s death and at loose ends, Will joins up with a group of similarly disaffected veterans who have formed a sort of art collective, where they take and cut up military uniforms. They then use the scraps to make paper that they will use to create stories, poems, and works of art that will allow them to process their traumas in artistic terms. The creations also become correctives for what they feel are simplistic and distorted cinematic depictions of the grim reality of military service, specifically calling out the likes of “American Sniper,” “The Hurt Locker,” “Zero Dark Thirty” and “Saving Private Ryan.”

Several other members of the collective are portrayed by real-life veterans and there are a number of moments in which they tell their stories to each other. Unlike those who thank them for their service without stopping to think about exactly what that service might have entailed, they know they are telling their tales to people who understand exactly what they're going through; they feel safe enough to unburden themselves of some of their guilt and trauma. These conversations are enormously moving and make for an effective an anti-war message.

Another new member of the group is Isabelle (Talia Lugacy, who also wrote and directed the film), a Marine who has returned from her tour of duty with a limp, a family whose disregard for her and her problems borders on neglect, and plenty of barely internalized guilt over the things she experienced overseas. Isabelle soon becomes attached to Will, who seems to be holding things together much better than her. She clearly wants to figure out how he's been able to turn the corner when she hasn’t, only to get a rude awakening to how he's not quite as together as she seems to think.

These moments are fine, but sometimes smack a little too closely to the kind of obvious storytelling this film seems to be otherwise decrying when compared to the gripping stuff involving the other veterans. Some of the dialogue in their conversations feels just a little too contrived in its attempt to hammer home the underlying points Lugacy is trying to make. None of these scenes, save for a clunky one between Isabelle and her awful mother (Frances Fisher), are total duds and the performances from Lugacy and Adegoke are both good but the juxtaposition between them and the other stuff can be jarring.

For the most part, however, “This Is Not a War Story” is an ambitious and thoughtful attempt to deal with veterans coming to terms with what they have seen and done, without resorting to the overt melodramatics that even the most earnest and well-meaning Hollywood films sometimes indulge in. Granted, many may find this movie to be too painful at times, preferring the theatrics of titles like the one that it name-checks. However, those who can do without those theatrics and who can handle the occasional uneven moments may well be struck by the quiet power of "This is Not a War Story." 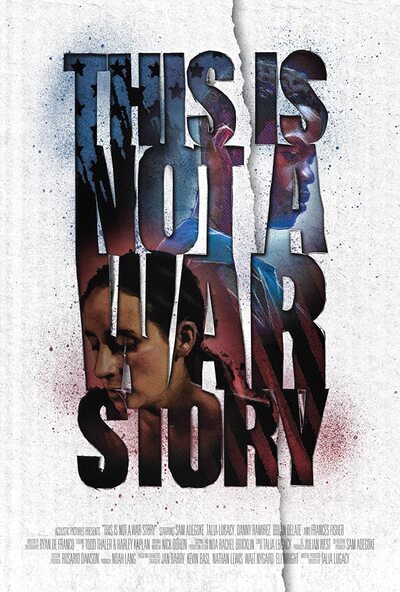 Sam Adegoke as Will LaRue