It’s doubtful anyone expected that “Think Like a Man” would be the hit that it was in 2012. Based on Steve Harvey’s kinda-sorta self-help book titled “Act Like a Lady, Think Like a Man,” the movie featured a great-looking and magnetic ensemble of actors and actresses in wacky, hackneyed, battle-of-the-sexes scenarios. It grossed almost $100 million worldwide. It also made a superstar out of diminutive, quick-talking comedian Kevin Hart.

Two years later, we have “Think Like a Man Too,” a sequel that screams “cashing in again.” From the half-heartedly clever spelling of “Too” in the title to the overly familiar Las Vegas setting to the complete breaks in narrative for music-video style interludes, everything about this film smacks of laziness.

The one person working hard, because it is his shtick, is Hart. A little bit of his act goes a long way; here, his frantic presence is stretched thin to the point of snapping. In the first film—which, like this one, was directed by Tim Story—Hart was an enjoyable scene-stealer in small, sporadic doses. He then went on to re-team with Story in this winter’s formulaic, mismatched-buddy-cop comedy “Ride Along” opposite Ice Cube. Now, in this sequel, he’s not just part of the group, he’s the narrator and driving force.

Hart takes over duties from Harvey, smothering the film with amped-up voiceover that over-explains the film’s wacky romantic shenanigans, which weren’t all that complicated in the first place. Usually he does this with tortured, extended basketball metaphors about the teams being tied (because it’s the eternal struggle of men vs. women, hardy har har) or the beauty of an off-balance, fade-away jumper.

As contrived as it all sounds, there is an actual reason for all the characters from the first film to reassemble for part two courtesy of returning writers Keith Merryman and David A. Newman: Mama’s boy Michael (Terrence J) and single mom Candace (Regina Hall) are getting married. (Although Mama herself, played once again by a withering Jenifer Lewis, keeps trying to get between them in stereotypical fashion.)

All the sources of tension that defined the other characters—neediness, fear of commitment, balancing career and romance—have dissipated. The men and women are all coupled up and happy. So what’s left to do with them now? Not much, it seems, except allow them to wallow in clichéd Vegas antics. Media exec Lauren (Taraji P. Henson) has planned a wild bachelorette party for Candace and their pals: dress designer Mya (Meagan Good), new wife Kristen (Gabrielle Union) and the random Sonia (LaLa Anthony), who’s thrown into the mix as an afterthought.

Meanwhile, Hart’s overzealous Cedric has secured a luxury suite at Caesars Palace and planned a crazy night for the groom and their buddies: laid-back chef Dominic (Michael Ealy), ladies’ man Zeke (Romany Malco) and stoner Jeremy (Jerry Ferrara). Also along for the ride are Gary Owen and Wendi McLendon-Covey as Bennett and Tish, the token, dorky white couple, complete with fanny pack (for him) and sweater sets (for her). Naturally, they will learn to let loose and get their freak on in various capacities.

But all these folks are pretty bland, really; then again, even gorgeous, charismatic actors like these can get steamrolled when Hart is around. And there are so many returning players combined with several new supporting characters that everyone gets lost in the shuffle (if you’ll pardon the inadvertent gambling pun). There’s no real plot here; no sense of narrative progression. Story moves them from the pool to the blackjack table to the dance floor to the strip club and, eventually, jail.

Details and plot points that seem to matter in the moment fall by the wayside: the flashy, orange Lamborghini Cedric is driving when he pulls up to the hotel’s valet parking, for example, or the bash he plans in the $44,000-a-night suite he can't afford. He secures a stripper pole for the room, hands out flyers and everything. Does it even go down? Do random strangers show up at the door and wonder what happened? None of it seems to matter.

The best sequence in the whole film has very little to do with the nuptials at hand. It’s a full-length music video for Bell Biv Devoe’s kitschy, catchy, 1990 hit “Poison,” complete with all the stylistic details of the R&B/hip-hop clips from that era. Clad in sexy, sparkly nightclub dresses, the ladies writhe seductively on couches or mug ferociously before fish-eye lenses. They seem to be seizing the reins and enjoying themselves genuinely for the first time. They do the ENTIRE song.

It’s a jubilant departure—but it’s also a glaring reminder of how little else the film has to offer. And it’s enough to make you wish Michael and Candace had just eloped. 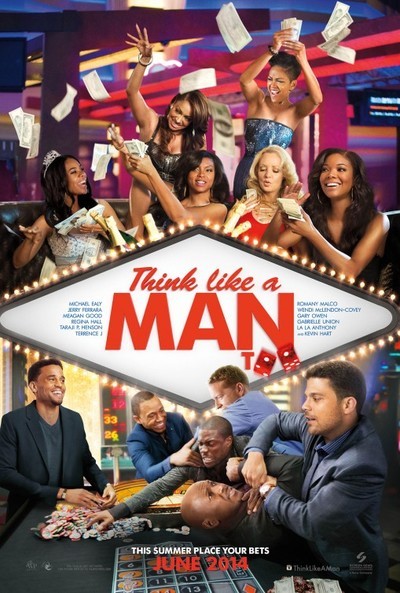