They'll Love Me When I'm Dead

The director Orson Welles admired most, John Ford, made in the late ‘50s a picture called “The Man Who Shot Liberty Valance.” A tale of the “civilizing” of the Old West, it related the origin story of a distinguished statesman as it is known to his constituents and contrasted it with a more ambiguous and ambivalent true tale. “When the legend becomes fact, print the legend,” a journalist character says near the end of the movie. This line gets quoted a lot without the benefit of the ironical line reading, and people act as if Ford was somehow advocating this practice. He was not; he was merely noting it. This movie begins with Peter Bogdanovich, the American director and historian, discussing the Orson Welles quote that gives the movie its title.

His recollection of the context of the utterance is followed by various voices avowing that Welles would never have said such a thing at all. That we are able to have such arguments at all in this era of never-ending recorded evidence is kind of miraculous, but it also helps, when deciding whether to print the fact or the legend, or deciding which is which, to have such an iconic and iconoclastic figure of fascination as Orson Welles to hang such speculations on.

Directed with toy-store-window-gazing enthusiasm by Morgan Neville (“20 Feet From Stardom,” “Won’t You Be My Neighbor”) “They’ll Love Me When I’m Dead” chronicles the making and unmaking of “The Other Side of the Wind,” Welles’ remarkably ambitious, never-completed-by-the-filmmaker swan song of sorts. (Welles would make other films before he died in 1985, but none in the States; “Wind” is best understood as Welles’ last Hollywood, or anti-Hollywood, movie.)

The movie’s beginning has archival footage of Welles teasing the project to interviewers, predicting what the now-finished version, premiering, like this film, on Netflix, would deliver in the way of meta-textuality. With charming bluff, he says the movie will be shot “as though it’s a documentary.” He goes on to describe a movie director as someone who presides over “divine accidents” and says his shoot will yield some “if we’re lucky.”

What Welles’ story and shoot yielded were divine accidents of a very dark sort. This movie’s admiration for Welles, shared by all the interview subjects (and some may find it frustrating that they are not identified on-screen as they appear) is tempered by an awareness of the darker aspects of his personality, and the ways he could be not just his own worst enemy but the worst enemy of what is now going to be known as his ultimate opus.

Particularly poignant is the story of Gary Graver, the journeyman California cinematographer who called Welles out of the blue one day and almost immediately found himself shackled to the maestro. A technically adept operator with a particular affinity for working fast and cheap, Graver was a perfect match for Welles at the height of his renegade period. But the partnership cost Graver dearly in both the financial and personal departments, as interviews with a wife and one of his sons testify.

And yet these subjects don’t betray any rancor towards Welles. Nobody does. Because as hot-tempered, unreasonable and unrealistic as he could be, he made the work exciting. He knew, as he was making “Wind,” that he was taking spectacular artistic risks. “You either hate it or you loathe it,” he said at one point in the production, anticipating its divisive qualities. But his enthusiasm was itself a form of generosity, and it was infectious.

It could not last. Even as the post-production period spirals into an entropic limbo of no money and confiscated footage, and Welles lumbers toward death, the movie can’t help but portray him as an inspired and inspiring figure. Genius, this movie believes, is real, whether it’s failed or successful. 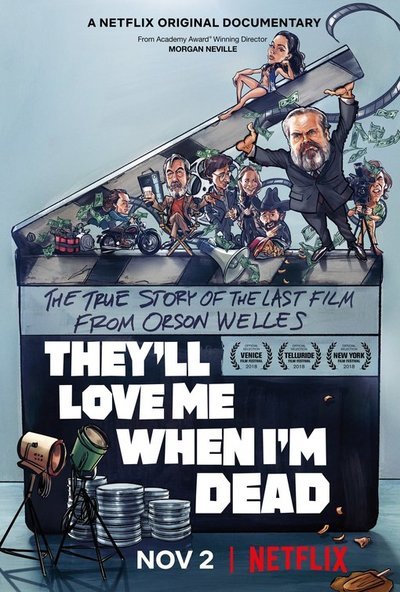 Orson Welles as Himself (archive footage)

Peter Bogdanovich as Himself

Oja Kodar as Herself

John Huston as Himself (archive footage)

Frank Marshall as Himself

Cybill Shepherd as Herself

Dennis Hopper as Himself (archive footage)

Rich Little as Himself