It'd be interesting to hear the reactions to writer/director Andrew Bujalski's "There There" from people who don't know the background story of its filming. The background contextualizes the often startling and seemingly un-motivated visual choices made, all of which create an awkward and stilted atmosphere. But without the background context, how will people make sense of this strange almost flat-affect experience? Bujalski isn't really returning to his mumblecore roots with "There There," although I've heard comments along those lines. The film is DIY lo-fi, but it's also high concept.

Filmed during the height of the pandemic, when the restrictions were their most stringent, "There There" is made up of six two-character scenes, interrupted by musical interludes, performed onscreen by Jon Natchez in various homey settings (a garage, a stairway, a kitchen). The seven actors—Lili Taylor, Lennie James, Annie LaGanga, Avi Nash, Jason Schwartzman, Roy Nathanson, and Molly Gordon—were filmed separately (and shot remotely by cinematographer Matthias Grunsky on an iPhone). No one was in the same place at the same time. At any given moment, there is only one person onscreen. The camera never moves. This unusual process is sometimes interesting, but sometimes not, and it loses steam as it progresses.

In the first scene, Lili Taylor and Lennie James' unnamed characters lie in bed, blissed out after a hookup. He expresses a desire to see her again. She is put off by his openness, even though she had a good time too. Suddenly she's talking about serial killers and he's wondering what happened to the afterglow. In the next scene, Taylor sits in a cafe with her AA sponsor (LaGanga), who listens with irritation and incredulity as Taylor babbles on about her former sponsor's New Age-y beliefs. Like a relay race, in the next scene, LaGanga meets with her son's high school English teacher, an overwhelmed Molly Gordon (who seems barely out of high school herself). LaGanga's son has been harassing girls in the class, taking upskirt videos, and she demands to know why the teacher has lost control of the classroom. The scene crackles with mutual hostility and is "There There"'s high point. It’s an emotional intergenerational stand-off.

The illusion that these characters are in the same space at the same time never materializes (and maybe it's not supposed to). And the idea that we're separated into little pods, even when we are actually in each others' presence, is on the table, but it's not explored in particularly interesting ways. The limitations imposed on filming lead to scenes that are like an uncanny-valley version of two people talking. It sounds like dialogue but something's not quite right. The air is dead and flat. There were other films shot in 2020 and 2021, experiments in a form where the pandemic is present, even if just as an unspoken threat. Bo Burnham's "Inside" and Radu Jude's "Bad Luck Banging or Loony Porn" shimmer with a kind of nervy danger and anxiety, the feeling that humanity has come to some sort of brink. "There There" doesn't come to life, even as an intellectual or artistic exercise.

Isolating each person onscreen, while attempting to create an illusion of togetherness, all while acknowledging the abyss between the characters, could be seen as an apt metaphor for modern life and all that, particularly with the imposed isolation of the pandemic. Maybe "There There" would have had more resonance if it came out in 2020 or 2021. It might have been hailed as a brave example of continuing to make art even if we can't be together while we're doing it. Is the title "There There" meant to echo the consoling comment made to crying children? Or is it a description of the close-up to close-up back-and-forth shot construction, imposed by separation? Maybe. I couldn't help but think, though, of Gertrude Stein's famous remark: "There is no there there." 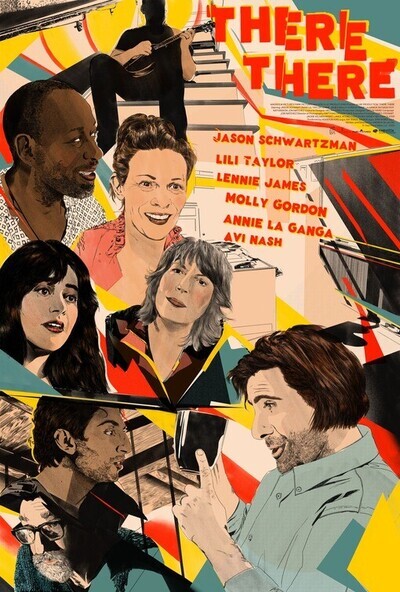