The 2007 French film “Inside” is considered by many to be the peak of the French Horror Wave of the last decade (which also includes must-sees in Alexandre Aja’s “High Tension,” David Moreau and Xavier Palud’s “Ils,” Pascal Laugier’s “Martyrs,” and more). As every horror fan knows, with great foreign success comes the inevitable American remake, and so here we are a decade later with Miguel Ángel Vivas’ long-delayed retelling of the story of a terrifying home invasion perpetrated on a pregnant woman. The 2018 version is admittedly more competently made than a lot of quickie VOD remakes but never justifies its existence, inexplicably softening the impact of the first film.

Sarah Clark (Rachel Nichols) is very, very pregnant. While driving at night with her husband, she feels a kick, and gets into a horrific car accident. Now, she’s a very, very pregnant widow. Alone one rainy night not long after, she hears a loud knock on the door. It’s a woman who claims she just wants to use her phone, but Sarah is instantly suspicious. When the unnamed woman (Laura Harring) reveals she knows Sarah’s not telling the truth about her husband being asleep, it’s clear she has malevolent intentions. And things get much worse from there. What follows is a cat-and-mouse game in which the cat is desperately trying to get the mouse’s baby, and the mouse is going into labor.

This is essentially the set-up for the original version of “Inside” as well, but the differences, at least at first, are in style. The first “Inside” is one of the goriest films ever made. It has earned the title of “torture porn” from some viewers, and is most certainly not for the faint of heart or soft of stomach. This version of “Inside” is relatively tame. Sure, there are some stabbings but nothing like the washed-in-red aesthetic of the film that came before. To compensate for the lack of gore, Vivas resorts to cheap filmmaking techniques like herky-jerky camera movements and an overcooked score. It’s a movie that’s constantly telegraphing its intention to scare you without actually doing so, especially in a midsection that feels like it’s dragging its feet just as the movie needs to be building suspense. Nichols and Harring give the film more than it deserves, but their work is wasted on a movie that doesn’t know what story it’s telling.

There are hints that Vivas may have wanted to make a Hitchcock riff, especially in a scene where Sarah tries to get help from a neighbor that recalls “Rear Window,” but this tonal choice never got his full commitment. Inevitably, “Inside” feels like it’s going through the motions, especially for people who remember the twist ending from the original. I tried to put myself in the shoes of a viewer who would be surprised by it, although I feel like this version makes it so obvious that most people will have figured it out anyway. But whether you're new to "Inside" or a fan of the original, the change that Vivas and his team do make to the ending will leave you scratching your head. 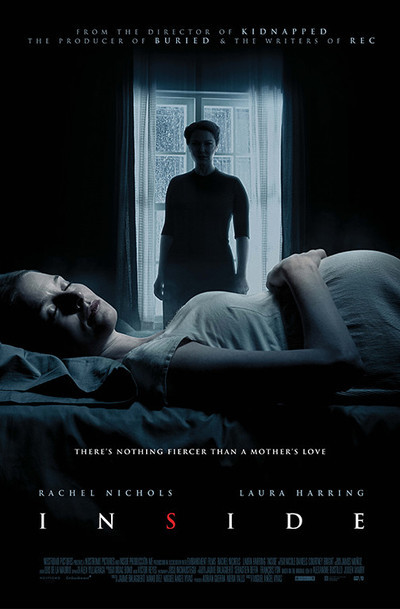