The World of Kanako

“The World of Kanako” contains elements of “Bad Lieutenant,” “Oldboy” and even “The Searchers” but filtered through a lens that’s so covered in grime and blood that many people will consider the nihilistic trip not worth the effort. It’s a film that’s tempting to dismiss because of its bleak, misanthropic viewpoint on the world, but that would be discounting the quality of the filmmaking and the riveting performance at its center. Based on Akio Fukamachi’s “Hateshinaki Kawaki,” Tetsuya Nakashima’s “The World of Kanako” is such an in-your-face experience that its opening credits includes words sprawled across it like the old Adam West “Batman,” and those words are “Kill!” and “Fuck!” It sets a tone.

Lest you think “The World of Kanako” is a playful homage or a stylish ride, be warned. This is a movie with enough gore, rape, murder, drug use and horrible behavior to make Takashi Miike blink. It is not an easy watch. And it does feel sometimes like excess for the sake of excess. But then star Koji Yakusho will do something unexpected emotionally or Nakashima and cinematographer Shôichi Atô will find a striking image and the movie will win you back. Like the characters who are constantly either in love or murderous rage, Nakashima pushes and pulls at his own audience.

The great Yakusho (“13 Assassins”) plays Akikazu Fujishima, a retired cop who seems to live for nothing. Not long ago, he caught his wife having an affair and plowed into their car before pulling the man from the vehicle and beating him. He hasn’t seen his daughter Kanako (Nana Komatsu) in a long time, pops pills and has taken to vomiting in rainy alleys. When he learns that Kanako is missing, he is given new purpose, although his misanthropy makes him something of a loose cannon. As he descends to a world of drugs and prostitution to try and find Kanako, Nakashima flashes back and forth chronologically to tie the two timelines together and reveal what happened to Kanako.

From the beginning, “The World of Kanako” is designed in a way to be unsettling. The opening scenes with close-ups of sweaty faces spurting lines like “I love you” and “I’ll kill you,” set the dual themes of the piece—love and violence—but they do so in a way that’s discomforting. There’s a sense of displacement and confusion, especially for the first act, that’s not unlike a late night in a club. You barely hear snippets of conversation over the loud music, and Fujishima and editor Yoshiyuki Koike don’t hold a shot for more than a few seconds. Even scenes of dialogue between two relatively normal characters—like when Fujishima is talking to Kanako’s classmates or her doctor—are cut together from several angles.

At first, Fujishima feels just like a straightforward anti-hero, the bad cop trying to do one last good thing, but that interpretation changes relatively quickly. He’s not a hero. He’s the kind of guy who, while staying with her to help find his daughter, rapes and beats his ex-wife. He picks up a hooker who he drunkenly calls his daughter’s name. Yakusho is fearless, playing most of the film hunched over, bloody and sweaty like a man who has literally taken himself to the brink of death and no longer cares what happens to him. It’s such a daring performance that it makes the violence of the piece more visceral because we believe this man is capable of surviving anything and doing anything to get his daughter back. There’s a parking garage shoot-out/stab-out that needs to be seen to be believed. It’s “Oldboy”-claw-hammer-scene insane.

Admittedly, I grew tired of the nihilism of “The World of Kanako” long before it was over, and I have a high tolerance for that sort of thing, so that has to be taken into account when assessing the overall product, but the quality of the filmmaking never flags. You just have to ask yourself if the journey to this ridiculously violent world, however well-constructed, is one worth taking. 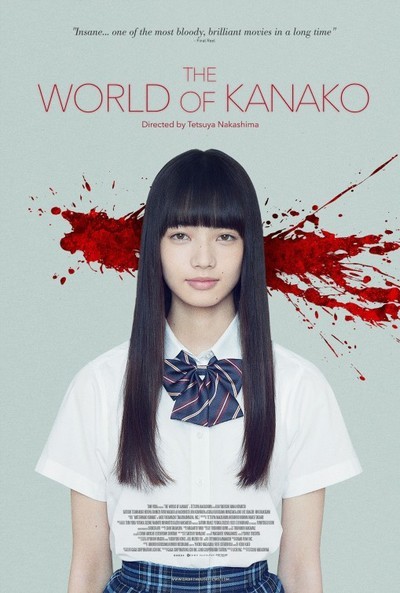