You don’t need to watch the bloody/angsty Korean superhero/horror hybrid “The Witch: Part 1. The Subversion” if you’re only curious about its sequel, “The Witch: Part 2. The Other One.” Both “The Witch” movies borrow enough of the style and tropes of popular American genre movies that all you need to know about “Part 1” is that it’s basically a Korean version of Stephen King’s “Firestarter,” only bloodier and now more like an “X-Men” superhero adventure.

“Part 2” is more of that story—Goo Ja-yoon (Kim Da-mi), a mysterious young girl with super-powers, escapes a shady prison-like science lab and then tries to evade a bunch of people who come looking for her—but with a different young protagonist, Cynthia (Shin Si-ah). Neither girl can remember their pre-lab past, but they both develop new attachments with various side characters.

There’s a lot of bloodshed in both movies, some rubbery-looking computer graphics mayhem, and a surplus of swearing. That’s all part of these genre hybrids’ appeal: like some of the better American superhero movies and TV shows, “The Witch: Part 1” and its sequel feel like they’re actually trying to appeal to a target audience of teenage boys and girls. I mean, yes, there are several female leads, but more importantly, those characters get to do more than just act out the usual pseudo-empowering revanchist fantasies that pass for bubblegum feminism. “The Witch: Part 2. The Other One” may be lumpier and more unfocused than its predecessor, but it doesn't rehash what came before it.

A good part of what makes “The Witch: Part 2. The Other One” satisfying is that it’s a sequel and therefore part of a prefabricated narrative and genre. There’s a lot of welcome teenage and teenage-friendly melodrama here and it’s not always what you might expect. Even Cynthia, a clone who was originally named ADP (Ark 1 Datum Point), finds a little potential for romance after she escapes the Ark lab facility and stumbles into Kyung-hee (Park Eun-bin) and her oafish brother Dae-gil (Sung Yoo-bin). It’s mostly only potential since “Part 2” feels like an overly elaborate bridge between “Part 1” and an inevitable “Part 3.”

Still, it’s refreshing to see flirtation and even buddy comedy chemistry as the foundation for many of this movie’s criss-crossing relationships, including the better-developed of the two pairs of mercenaries that chase after Cynthia, the whiskey-and-swears tomboy Jo-hyeon (Seo Eun-soo) and her South African beardo partner (Justin John Harvey). There’s also a brother-sister pair of Shanghainese killers that are unleashed on Cynthia by a different shadowy organization. But the most important thing to know here is: everybody wants to either kidnap or ally with Cynthia, and they’re all somehow related to each other.

No, seriously, everybody in this movie is somebody’s ex-partner, sibling, or potential future partner. The good news for the idly curious viewer is: you don’t need to keep a detailed scorecard of these connections. It certainly helps to know that the wheelchair-bound Doctor Baek (Jo Min-su) has a cordial rivalry with Jang (Lee Jong-suk), and that they’re both still looking for Ja-yoon after the events of “The Witch: Part 1. The Subversion.” But much of “The Witch: Part 2. The Other One” concerns the confluence of overlapping minders and captors that surround Cynthia. There’s also a decent-sized B-story involving Kyung-hee and Dae-gil, who are already embroiled in a western-style plot to protect their dead dad’s land from murderous uncle Yong-du (Jin Goo). But all sub-plots come back to Cynthia, a blessedly uncomplicated character with no past and a striking resemblance to Ja-yoon.

Some blood-soaked and perhaps overly busy action scenes suggest that the makers of “The Witch: Part 2. The Other One” still don’t know how to synthesize their overstuffed grab bag of pulpy tropes and stock characters. Even Harvey’s character points out (repeatedly) that Jo-hyeon curses a lot, though that isn’t so strange given how many recent American super-shows have leaned into gore and four-letter words to establish their adolescent bonafides. “The Witch: Part 2. The Other One” feels like a soapier alternative to those series, right down to its convoluted backstories and slow-fast-slow pace. This movie is 137 minutes long and definitely feels like it.

“The Witch: Part 2. The Other One” resembles the sort of movie that you used to find in the fifth or sixth auditorium of your local second-run movie theater at the dead center of a triple-digit summer. Or maybe it’s more like the shaggy dog super-movies that proliferated in the 1990s, back when American movie studios didn’t know how to consistently lure general audiences with super-stories. I’m not sure where this particular wannabe franchise is going or if anybody but initiated viewers will care to find out, but I could watch another one. 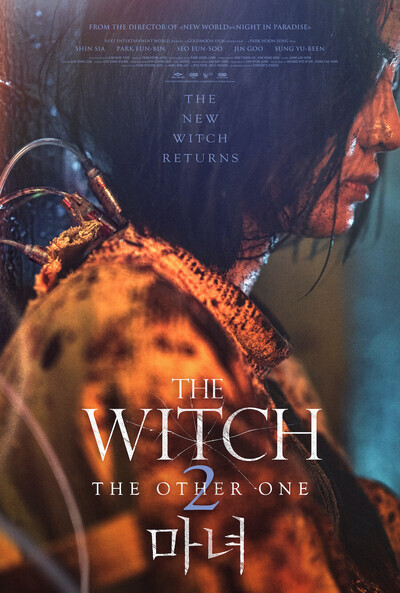