“The Wave” feels like an anachronism. In the late ‘90s and early ‘00s, there were waves of movies about obnoxious, well-off white dudes learning a lesson about their false priorities and weak moral centers. “American Beauty” is one of the most notable given its Oscar success, but this was a crowded subgenre that mercifully went the way of the dinosaur. Watching people who arguably weren’t worth a second thought in terms of character suddenly realize they’ve been jerks most of their lives? What else ya got? At least, director Gille Klabin tries to amp up “The Wave” with aggressive visual style, but it’s still a movie that’s rotten at its core because it suffers from the same problem of all those “American Beauty” clones in that it never satisfactorily answers the question “Who cares?”

Frank (Justin Long) is an insurance lawyer who’s thrilled that he’s figured out a horrible way to bilk a grieving woman out of the money owed her after her husband’s death. Yeah, he’s a winner. From the beginning, Frank is a tough guy to root for, and, yes, of course, you’re supposed to think Frank is a jerk, but “The Wave” doesn’t lean hard enough into that concept. If he was a true anti-hero, there could be a bit of cathartic thrill in watching what he goes through in this hallucinogenic variation on “A Christmas Carol” but writer Carl W. Lucas isn’t willing to go there. Frank is really a good guy deep down, maaan, and it’s just the circumstance of his profession, his materialistic wife (Sarah Minnich), and his enabling friend Jeff (Donald Faison) that have sent him down the wrong road. The way "The Wave" is constructed, we're supposed to feel sympathy for Frank, and I simply never could. Not once.

After discovering the loophole that could lead to his promotion, Jeff encourages his pal to go celebrate. They end up at a bar, where they meet two women named Natalie (Katia Winter) and Theresa (Sheila Vand), who catches Frank’s eye. When Theresa suggests they go to a house party after the bar, Frank relents, ending up in a back room with a mysterious man named Aeolus (Tommy Flanagan). Drugs are taken, and Frank wakes up in the house the next morning. Everyone is gone. His wallet too. Frank finds his way home, and then things start getting weird. Time jumps and Frank starts to wonder if he’s not still feeling the effects of whatever he took last night. Is any of this really happening? And what does it all mean?

A riff on Dickens with a modern Scrooge learning a lesson through the help of hallucinogenic drugs isn’t the worst idea, but “The Wave” suffers from execution problems on every single level. Before the long journey of Frank’s soul, the dialogue is unbearably shallow. Just listening to Frank and Jeff talk dude-bro in his office made me want to take something myself, and then seeing them flirt with people at a bar reminded me why I don’t go to bars anymore. It’s just a deeply unlikable movie mostly because it can’t figure out what it thinks of its protagonist. Justin Long plays Frank as more of a goofy opportunist, which makes the film feel like an awkward physical comedy of errors instead of the philosophical adventure that its writer and director probably thought they were making. And the cast never gels. Vand walks on from a more complex character study, Long thinks this is an “American Pie” sequel, and Faison clearly just doesn’t want to be there at all. “The Wave” is full of scenes that don’t click, probably because the filmmakers were just waiting for the next visual flourish or psychedelic moment to push us to the next harried plot point. It's exhausting.

In the end, “The Wave” isn’t even satisfying as a morality tale. As so many unfocused films do, it comes to a twist ending that simply makes what came before it even more hollow. None of this makes sense. None of this is supposed to make sense. It’s a movie designed to replicate the confusion of its protagonist, but ultimately reflects the confusion of everyone who made it. 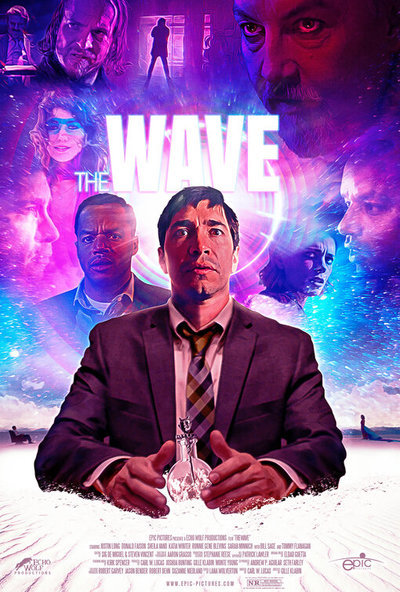 Rated R for strong drug content and language throughout, some disturbing images and sexual references.