Norwegian hit “The Wave” strikes all the expected beats of an American blockbuster disaster movie like “The Day After Tomorrow” or “San Andreas.” There’s the long set-up in which only one man knows the truth about the impending destruction. There’s the event itself, designed to amaze audiences with its “could that really happen” intensity. And there’s the recovery final act, in which the world has changed for the characters and they have to struggle to get back together. It’s a structure that can be underappreciated in that if any of these three acts are too long or poorly done, the suspension of disbelief is punctured and a disaster movie becomes, well, a disaster itself. What’s interesting about “The Wave” is stepping back and considering just how well-constructed the whole thing is. The slow-burn build-up is just long enough, the disaster itself is just harrowing enough and the final act is just intense enough to keep us engaged. It’s what one would call a “sturdy” genre pic—it doesn’t break any ground (pun kinda intended), but it gets the job done.

Geiranger is one of the most coveted tourist spots in all of Norway. It’s easy to see why. The gorgeous views of the mountains and its crystal clear lakes bring new travelers every year. Of course, as the opening news footage warns us, any village at the base of a mountain, especially one as big as Åkerneset, is a ticking time bomb. Over ominous footage of landslides hurtling towards small towns, we hear “It’s only a matter of time before the next big disaster.” If we’ve learned anything from cinema, it’s that Mother Nature hates you and is going to kill you. It’s a wonder we don’t all live in shelters.

The canary in this coalmine is Kristian (Kristoffer Joner), the most vigilant employee at a Geiranger warning center. What’s a warning center, you ask? Well, the likelihood of a rockslide, and the accompanying wave that would come careening through the valley should enough water be displaced, demands a staff of people who monitor the land and water. Kristian is leaving his post, moving to the city with his wife and kids. Of course, he leaves a day too late. First, there are just some odd readings about groundwater on the mountain disappearing. Then there’s Kristian’s realization that the substratum are shifting so drastically that an avalanche is inevitable. Of course, the rest of his staff just think he’s crying wolf. There isn’t a movie if they’re not apprehensive, when, in reality, they’d probably be dying to push the big red button that launches the siren that warns Geiranger that they have ten minutes before they’re underwater.

“The Wave” hits all of the right beats for its genre. There’s the foreboding score as the camera slowly zooms in on Kristian’s face behind the wheel, stopped in traffic and just realizing what the latest readings meant. There are shots of birds flying in the other direction of the mountain. There’s even a great scene in which one of the analysts is watching a slasher movie on his laptop as lights start to blink red behind him. The Jason Voorhees of “The Wave” is Mother Nature.

If there's a criticism of the structure here, it's that the build-up act of “The Wave” is a little too long. After Kristian knows something is afoot, and we clearly know that he’s right, there’s a bit too much wheel-spinning before we get to the titular event. However, said event does not disappoint. Kristian and his daughter are headed for higher ground while his wife and son are at the hotel at which she works, trying to get residents to safety before getting trapped in an underground bunker. When the wave hits, it does so with biblical force, and director Roar Uthaug does an excellent job of keeping the danger tactile. Water rushing into a room or smashing into a car doesn’t feel like typical Hollywood CGI, which allows the stakes to resonate. He’s been tapped to reboot “Tomb Raider,” and I hope he brings the same energy to that franchise that he did here. Lara Croft ain't got nothing on Mother Nature. 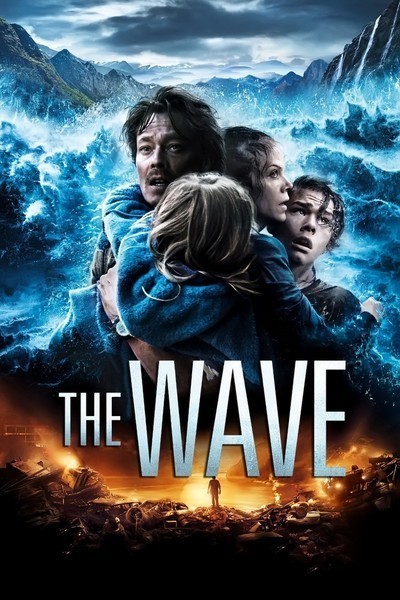 Rated R for some language and disaster images.