The Warrior Queen of Jhansi

“The Warrior Queen of Jhansi” is the third of three announced 2019 Indian period piece films about Lakshmibai, one of the Indian leaders who led the fight against the British East India Company during the Sepoy Mutiny of 1857 (a TV series called “Jhansi Ki Rhani” was also released earlier this year). The two previous films, “Manikarnika: The Queen of Jhansi” and “Sye Raa Narasimha Reddy,” were mostly successful war dramas that focused on action and melodramatic intrigue (though Lakshmibai is only a supporting character in the latter movie).

The makers of “The Warrior Queen of Jhansi” don’t give viewers as many reasons to invest in their versions of these characters, not beyond speech-like declarations of intent and canned drama that often resolves itself in a matter of minutes. Any elements of this drama that require greater thought or emotional investment are too flimsy unless you’re already invested in them. The audience isn’t really invited inside the story or its ideas beyond applauding, tsk-tsking, or gasping whenever it’s ostensibly appropriate to do so.

In “The Warrior Queen of Jhansi,” Lakshmibai (Devika Bhise, who co-wrote the movie with director Swati Bhise, her mother) is a generic symbol of feminist empowerment. Most dialogue in the movie is rushed and dull. Characters often declaim their values in opposition to each other whenever they’re not explicitly telling each other what they’re worried about. Lakshmibai is no exception: she tells us that “all our problems” will go away if she and her husband Gangadhar (Milind Gunaji) “have an heir and the English won't be able to take our beloved Jhansi.” They do, but that kid dies, so they decide to formally adopt their nephew instead.

Minutes later, Gangadhar is on his deathbed, and he barely gets two lines in, both of which make him sound like a Magic 8-ball—“Listen to your fear. It will tell you what to do.” Meanwhile, she keeps right on expositing: “But without you, our enemies will see us as weak, and see this as an opportunity to attack us. Our neighboring kingdoms of Orchha and Datya have been waiting for this moment.” Ma’am, your husband is dying, can you please at least act like his expiration isn’t just a break between more important scenes?

Lakshmibai soon digs in her heels against the most one-note, mustache-twirling Brits I’ve seen in a recent Asian period drama. Conflicted leader Hugh Rose (Rupert Everett) tut-tuts and refills the glass of hothead Robert Hamilton (Nathaniel Parker), who keeps barking about how he wants to destroy Lakshmibai and the people of Jhansi (“She will never surrender. She needs to be broken and destroyed!”). Meanwhile, soft-spoken emissary Robert Ellis (Ben Lamb) has a stiff-upper-lip sort of attachment to Lakshmibai, which he almost never expresses, except when he reaches out to grab her as she stumbles during a Sorkin-esque walk-and-talk ramble ("Do not presume to tell me what I can and cannot do,” she yells at him). They sneer and rant at each other, but there’s not much to what they’re saying beyond some tedious sloganeering, like when Ellis insists that Lakshmibai “is more than just a woman: she's an idea. And ideas cannot be captured or owned. She belongs to the people, not the East India Company.” I believe that there’s some truth to that sentiment, but heavy-handed dialogue and wan action scenes don’t make a great case.

Speaking of battle scenes, most of the action in “Warrior Queen” happens across the screen, even during dialogue scenes. The movie’s visual compositions are, in that sense, more ornamental than dynamic. There’s a lot of side-to-side and frame-to-frame movement, but very little of it demands that viewers pay attention to what’s happening within the camera’s frame beyond a point. That lack of perspective can be seen throughout the movie’s major set pieces, including one set at night, when the Brits invade a castle, force the Queen to flee, and well, you’ll see. Or not, given that most of this scene is so poorly lit that it’s hard to get excited about much of what’s shown on-screen.

I also don’t see the comfort that “The Warrior Queen of Jhansi” might be able to provide beyond a basic sort of solidarity, the kind that’s written in toothless, klutzy dialogue like “These events, tragic as they are, will either will either end this mutiny, or be the start of something much larger—a war of independence.” “Warrior Queen” is not the first movie about this subject to be helmed by a woman—“Manikarnika” was co-directed by star Kangana Ranaut—nor does it feature a stand-out performance like those other movies do (Ranaut is very good in “Manikarnika”). So while I suppose you could do worse than “The Warrior Queen of Jhansi,” I know you could do better. 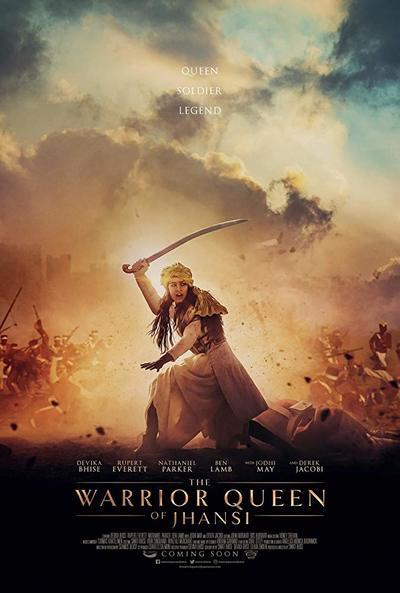 Jodhi May as Queen Victoria