The problem with "The Violent Heart" isn't that it goes too far, it's that it doesn't go far enough. Written and directed by Kerem Sanga, and unfolding in the type of desolate rural American landscape where movie characters tend to either battle over ownership of farmland or participate in demonic rituals, this movie arrives preceded by claims that it's a melodrama in the tradition of Douglas Sirk ("Magnificent Obsession"), embracing coincidence and tragic fate.

But what's onscreen feels more like a hushed, emotionally constipated middle-American indie drama, where pretty much everybody is weighed down by the horrors of the past even though they go about their days in clueless innocence or lie about everything being fine. Imagine an early Bruce Springsteen ballad worked over in a fiction writing workshop until the life has been bled out of it. Hell breaks loose in the film's final stretch, and sure enough, that's when things finally start to cook. But by then it's too late for "The Violent Heart" to do anything but make you mourn all the promising artistic and narrative pathways it refused to explore.

Jovan Adepo ("Fences," "Overlord") plays Daniel, a 24-year-old trying to get into the Marines in order to escape his small town and put his tragic family past behind him. When he was nine, he saw his older sister being murdered in the woods by a man whose face he never saw and who has gone unpunished for 15 long years. Daniel understandably dealt with anger management issues his whole life, and did time as a juvenile for accidentally blinding a classmate in a school fight.

Against all odds, a redemptive romance blooms between Daniel and Cassie (Grace Van Patten), an 18-year-old high school senior. Cassie is a bright, beautiful, witty young woman whose closest friend is her father, Joseph (Lukas Haas), who also happens to be her English teacher. Cassie is naturally starting to drift apart from Joseph and her mother Rose (Kimberly Williams-Paisley) in preparation for leaving the nest, and the tension is amplified when she returns to school from her first long afternoon with Daniel (who fixed her vehicle at the local garage where he works as a mechanic) and catches her father in what might be a compromising moment with a teacher (they both seem flustered as the teacher lets herself out of Daniel's classroom).

It's impossible to say an unkind word about the cast, a dazzling ensemble that includes Mary J. Blige, who shines as Daniel's mother (in her first movie role since "Mudbound"); Cress Williams as Lee, Daniel's father, an Afghanistan veteran who inspires him to the enter the armed forces; and Jahi Di'Allo Winston as Daniel's kid brother Aaron, who frets that mom favors big brother over him. Every performer of any significance works overtime to fill these characters with emotional nuances.

The problem is that they seemingly have to tease out elements that are mostly glanced-over in the screenplay—particularly the racial dynamics of the relationship between Daniel and Cassie, and between Daniel's family and the town, which from all appearances is overwhelmingly white. There's exactly one reference to the fact that Daniel is a dark-skinned man in his mid-twenties dating a light-skinned blond teenager in a small middle-American town, the type that Black road-trippers might've driven around during the Green Book days.

Even though we can feel the racial tension as subtext in a few scenes (particularly when mom and dad raise objections, and mom starts to say something like, "Also, he's..." but doesn't finish) it seems unrealistic that nobody in this story would bring it up as text. The central love story is a Romeo-and-Juliet type affair involving what appears to be the only Black family in town, one that was the victim of a violent, unsolved killing 15 years earlier. The writer/director makes a point of contrasting the daunting odds facing the hero as he tries to gain admission to the Marines despite his juvenile criminal conviction, and the heroine failing to truly listen to Daniel's pain, even as she offers herself as a confidant and emotional cheerleader. She replies to reports of incidents that shattered his self image and wounded his soul with counter-examples of bad stuff that just happened to her. Poor Cassie just doesn't get it.

But contrary to the portrait painted by a weirdly evasive screenplay, it's not just because she's a teenager and he's an adult man. And it's certainly not just because she's female and he's male. The films of Douglas Sirk have been repeatedly invoked in advance press for this movie—reviews and film festival coverage alike—with "Magnificent Obsession" name-checked most often. But the classic that "The Violent Heart" seems to want to channel, deep down, is "Imitation of Life," a rare 20th Century Hollywood film that dealt directly with racism and sublimation in a prototypical (i.e. white) suburban setting, and was so popular it was remade (by Sirk) and became a key inspiration for Todd Haynes' 2005 Sirk tribute "Far from Heaven."

This movie keeps getting close to full self-awareness and raw honesty about its characters' predicaments (never more so than when Daniel marvels bitterly at Cassie's ability to see the silver lining in every cloud) only to shrug it off and keep moping in muted widescreen. Daniel and Cassie’s fundamental imbalance in life experience is racially coded. But the movie seems afraid to come out and name what we and the actors know that it’s depicting. The movie enters its home stretch just when it finally (and delectably) builds up a proper Sirkian head of steam, en route to an explosion of sorrowful mayhem that channels not just Romeo and Juliet, but Desdemona and Othello.

Why not let the story be what it's already inclined to be? Why not release the anxieties that are already swirling through every scene? And why not not double down on the melodrama inherent in the story, which has an unsolved murder mystery at its heart—the solution to which is not all that hard to figure out, honestly, and that the film doesn't even knock itself out trying to camouflage? Does this movie even know how great it could’ve been? It’s hard to tell.

A promising but self-thwarting film like this is more depressing than an outright bad or dumb one. "The Violent Heart" (a title worthy of a 1950s Technicolor melodrama) had everything it needed to be powerful, even cathartic: an opera with tearful monologues in place of songs. But it settles for coming across as the Official Version of the story—the one that the characters' descendants will tell two generations later, conscious of not wanting to embarrass anyone by getting into the ugly truth of what went down. 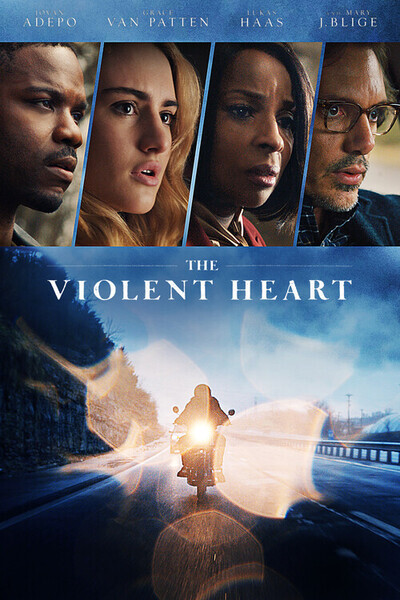