I know what unrepented sins I’ve committed to deserve the Divine punishment that is Netflix’s “The Unforgivable,” but you have a chance to be penitent and avoid it. This is three movies in one, each of which is progressively worse. We start with a tale of repentance, which leads to a brief lawyer drama before descending into a distasteful kidnapping and assault thriller. It is based on a TV series, unseen by me, so perhaps this explains how overstuffed this feels. Sandra Bullock has reason to appear in this—she’s also the producer—but great veterans like Vincent D’Onofrio, W. Earl Brown, and Viola Davis have no excuse. In particular, Davis’ scenes are questionable; she has a throwaway line that I’m sure the filmmakers didn’t intend for me to seriously consider. But it’s such a jarring, out of place comment that it colored my own analysis.

Not that the omission of the line would have made this a better film. Had the filmmakers interrogated its meaning, it might have elevated the work, however. Here’s the context: Bullock’s Ruth Slater gets out of prison and makes her way to the house of Liz and John Ingram (Davis and D’Onofrio, respectively). It’s in the middle of nowhere in a rural area outside Seattle. Slater used to live here. In fact, her crime was committed in this very house. “The Murder House,” the newspapers called it, a fact that neither member of the married couple knew beforehand. This is how “The Amityville Horror” started! But I digress. Slater was convicted of killing a cop and served a 20-year sentence. Now she’s trying to find Katie, the sister she left behind while incarcerated.

Jim invites this complete stranger, who looks like she’s been riding the rails in a Depression-era movie, into his house. Liz’s “did you just invite this suspicious-looking White woman into my house” look is priceless. Slater lies about her intentions, but once she finds out Jim’s a lawyer, she levels with him about trying to legally locate Katie. Jim drives her back to the bus station as they chat. Meanwhile, Liz does some research of her own and, when Jim returns home, he gets the Viola Davis lecture that’s her stock in trade. It includes the line I’ve been questioning: “She killed somebody in cold blood,” Liz tells her oddly sympathetic husband. “If that had been any of your Black sons who had been in the system, they would be dead.”

Liz is right, but why is this mentioned here? “The Unforgivable” keeps giving the impression that we should have some empathy for Slater, a woman who served her time, but it can’t help tripping over references to her privilege and making us apathetic. She even gets out of prison early for good behavior, which sets the stage for the revenge subplot. For most of the movie, we don’t know why Slater feels entitled to seek out the sister who may have been too young to remember her at all. Katie’s guardians (Richard Thomas and Linda Emond) make this valid point during the lawyer drama scenes. What good would it serve? It just seems like she’s being a troublemaker. Katie (Aisling Franciosi) already has enough stress. In the opening scene, we see her black out and get into a major car accident.

Director Nora Fingscheidt and writers Peter Craig, Hillary Seitz, and Courtenay Miles keep Slater’s reasons for reuniting with Katie from you in the hopes of generating mystery-based suspense. To do this, they use one of my biggest pet peeves: repeated flashback snippets that only show bits and pieces of the sheriff’s murder. They’re done in that clichéd soft-focus, then edited with the quick flashes that always telegraph that what we think happened most definitely did not. Here, it’s the same shots over and over, as if the flashback budget was $1.39. By the sixth time I saw a screaming little girl burying her face in a disembodied shoulder, I was ready to scream with her.

I wish I could tell you the infuriating cop-out “The Unforgivable” employs regarding its murder mystery. But I can tell you about that aforementioned revenge subplot. The sons of the murdered sheriff are none-too-happy that Slater’s out of jail. One brother wants to let it be, the other is following her and dreaming of kidnapping, violence and murder, especially when he finds out about Katie. Of course, it’s the passive one who will turn out to be vicious, but what’s the point of suddenly turning this into a thriller? If it’s meant to inspire sympathy for Slater, this plotline, and a scene where she’s brutally beaten by the daughter of another cop, does so by making law enforcement out to be a hotbed of violent, immoral cops and the barbaric children they’ve raised. Was that the intention?

Bullock walks through this with a perpetual scowl and a lack of makeup that screams “please, sweet Jesus, let me win another Oscar.” Rob Morgan has a few good scenes as her parole officer where he dispenses advice while scolding her for being so damn clueless. “You’re a cop killer everywhere!” he tells her as she unwisely believes her life will go back to normal. She’s shockingly remorseless, and we eventually learn why, but waiting for it doesn’t make good drama. Davis is intense, but she’s completely wasted. Her scene where she succumbs to Slater’s bogarting when the latter starts crying crocodile tears is a complete betrayal of Davis’ character.

I guess the biggest question I took away from this movie was “who is the ‘unforgivable’ of the title?” Is it Slater? The violent brothers? The system? The adopted parents who lied to Katie? This movie can’t decide. Perhaps the TV show, with the benefit of time to flesh out all aspects of its story, did a better job handling all this and providing a satisfactory level of either answers or ambiguity. At under two hours, this movie is an unwatchable, punishing hot mess that doesn’t earn its last scene of catharsis. You can’t feel any relief if you just don’t care.

Now playing in select theaters and available on Netflix on December 10th. 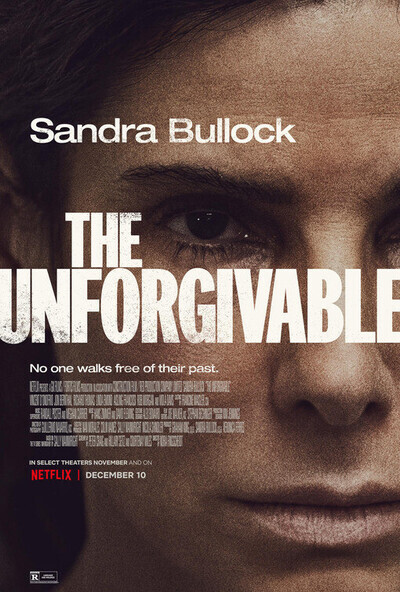 Rated R for language and violence.

Writer (based on the TV series "Unforgiven" by)