If Beale Street Could Talk

We are republishing this piece on the homepage in allegiance with a critical American movement that upholds Black voices. For a growing resource list with information on where you can donate, connect with activists, learn more about the protests, and find anti-racism reading, click here. "If Beale Street Could Talk" is now streaming on Hulu. #BlackLivesMatter.

Director Barry Jenkins summons James Baldwin’s spirit in his adaptation of the author’s 1974 book, “If Beale Street Could Talk” by immediately quoting him onscreen: “Every black person born in America was born on Beale Street, whether in Jackson, Mississippi, or in Harlem, New York. Beale Street is our legacy.” For Baldwin, Beale Street doesn’t just run through Memphis, Tennessee; it runs through the DNA of African-Americans, a symbol of our shared experience in these United States. Although we are not monolithic in thought, we are all beholden to the issues Baldwin interrogated and challenged with the words he spoke and wrote, issues like racism, injustice and so on.

History at large is written by the victors, but Black history is protected and passed on by our storytellers, the folks—famous and not—whose life lessons filled in the blanks for what was so often missing from, or corrupted by, the general narrative. The stories of our ancestors’ trials and tribulations form a generational artery that can never be severed so long as there is someone left to tell the tale.

Jenkins’ decision to let the original storyteller live and breathe throughout “If Beale Street Can Talk” is a wise one. We feel Baldwin’s gaze whenever the director and his cinematographer James Laxton execute the director’s trademark of having his actors look into the camera. The lovers at the heart of this story are technically staring at each other—and by extension, at us—with a devotion that is as tactile as the image itself. Like all love stories, this one occasionally takes fluttery flight, triggered by the gentlest and most subtle of gestures and emotions. But even at his most romantic, Baldwin never let the reader fall too deeply into the starry-eyed ether; the barbed scorpion’s tail of harsh reality remains ever-present, waiting to strike at any moment and break the spell. This realism is rendered in such matter-of-fact fashion that it becomes smoothly woven into the narrative without artifice.

The first words we see are by Baldwin, as are the first words we hear. Tish (KiKi Layne, making a stunning feature debut) utters a sentence you can find on page four of the book: “I hope that nobody has ever had to look at anybody they love through glass.” The beloved person under glass is Fonny (Stephan James), her boyfriend and the father of her unborn child. Fonny is incarcerated for a rape he did not commit. Each time the film visits him in prison, we’re reminded of the cruelly taunting symbolism of Baldwin’s line. Glass is transparent to the eye but impervious to the touch; a lover’s embrace is so close and yet so far away.

But there is no “woe-is-me”-style posturing in these scenes. Instead, Fonny and Tish find a semblance of normalcy tinged with sadness and elevated by hope. Sometimes the duo even laugh at situations that arise, sharing the gallows humor entrenched in the lives of the oppressed or downtrodden. This kind of dark humor snakes its way through “If Beale Street Could Talk,” sometimes finding itself in a release of relief, other times getting caught in one’s throat when situations suddenly become tense. This film knows that suffering and joy are strange bedfellows, opposites that are quite often prone to finding each other, sometimes within the same beat.

Thankfully, Fonny is not kept behind bars for the length of the film, as the retelling of his love story allows Jenkins to fiddle with the timeframe. We see the evolution of Fonny and Tish, first as rebellious, somewhat antagonistic children and later as devoted soulmates. In those latter scenes of burgeoning affection, Jenkins orchestrates a sense of pace and timing that, abetted by Nicholas Britell’s excellent score, makes the viewer swoon. There’s a woozy affectation to these moments—as Alan Jay Lerner once wrote, it’s almost like being in love. So whenever the narrative shifts back to Fonny trapped behind that glass, the result has a shattering effect on us.

Surrounding the leads are their respective, supportive families. Played by a murderers’ row of superb character actors led by the brilliant Regina King, the parents and siblings of Fonny and Tish are as memorable and well-drawn as the main characters. We meet Tish’s family first. Her parents, Sharon and Joseph (King and Colman Domingo, respectively) and her sister, Ernestine (Teyonah Parris) hear about Tish’s pregnancy first. The sequence unfolds in meticulously crafted moments that almost feel sculpted by Jenkins and his actors, none of whom are afraid of the awkward pauses that would realistically inhabit this type of discussion.

King plays this scene as if she already knows what her daughter has to tell her. When Tish calls to her mother before pausing to formulate her thoughts, Sharon’s “yes, baby?” response is so delicate, so impeccably rendered that we’re stunned that King could wring that much maternal love out of two words. Parris adds even more power to the moment. “Unbow your head, sister,” she says with a fierceness meant to instill pride. The bond between these women feels unbreakable, a testament to the actors who build it in such a short period of time.

Ernestine also serves as a bit of comic relief in the extremely tense meeting that takes place once James decides to invite Fonny’s parents over to share the news. Fonny’s parents are played by Michael Beach and the always welcome Aunjanue Ellis. They are joined by Fonny’s sisters (Ebony Obsidian and Dominique Thorne). While the men get along like a house on fire, there’s a palpable tension amongst the women, who seem to tolerate one another less robustly than the men do. The Hunt women clearly think they’re better, and Tish’s pregnancy will give them something to gloat about for sure.

Since this parental meeting is the novel’s most memorable scene, Jenkins’ casting reveals itself to be very clever, especially if you are familiar with the actors. Beach is always shorthand for somebody trifling, Domingo is boisterous yet no-nonsense and Ellis is a master at quickly defining her pride-filled characters. The Hunts are a Sanctified bunch who will immediately inspire nods of recognition for anyone with Sanctified relatives, though Mr. Hunt is definitely not a strict follower of this religious doctrine. When things come to a vicious boil, it’s one of those moments where big laughs give way to even bigger shocks. Though Jenkins tones down Baldwin’s verbal vitriol, the scene lands just as effectively as it does in the book.

Fonny and Tish have their own memorable scenes together, from their first night of lovemaking to their attempt to rent an apartment in a neighborhood whose renters do not want them there. This latter scene features Dave Franco in a landlord role that at first felt like stunt casting (the critics at my screening audibly groaned, in fact). But he, Layne and James create this ebullient, magical scene of pantomime that in lesser hands would come off as silly and trite. It’s the film’s most joyful moment. But again, we know what lies ahead for Fonny, so an underlying sadness is also present.

Though “If Beale Street Could Talk” is a series of vignettes, it holds together better than most films of this type. Each separate piece is tethered to the dual running threads of its love story and its tale of injustice. Though there are White cops in the latter story who are clearly villainous, the mistaken rape victim is also a person of color who has escaped back to Puerto Rico to deal with her trauma. This development sends Sharon to Puerto Rico to attempt to bring her back so she can exonerate Fonny. Before trying to find this woman, Sharon contemplates how she should dress. This scene unfolds wordlessly, yet King plays it so physically well that no words are necessary. There’s an unapologetic Blackness to her thought process as she decides whether to wear a wig or her natural hair—it’s the hairstyle equivalent of code-shifting—and what she settles on seems right, at least in that moment.

“If Beale Street Could Talk” leaves the viewer with feelings of anger at the fate society forces Fonny to accept, but it also conjures up some optimism for his and Tish’s future. This isn’t a happy film but it isn’t a hopeless one, either. The most striking thing that you’ll take with you is that Baldwin’s novel was written 44 years ago, but it’s just as timely now. Not much has changed for people of color, which probably wouldn’t surprise the author. And yet, he’d demand we not give up. This film powerfully conveys that message. The struggle is real, but so is the joy. We live, we laugh, we love and we die. But we are not gone. Our story continues, carried onward by our storytellers.

"If Beale Street Could Talk" is now streaming on Hulu. 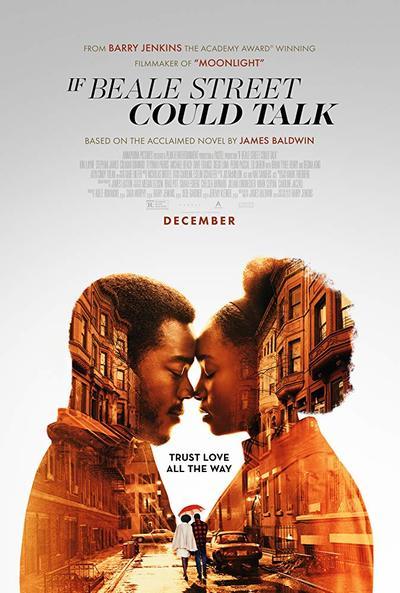