Though it precedes “Small Axe: Lovers Rock” in Steve McQueen’s series, “Mangrove” follows it in this year’s New York Film Festival Main Slate premieres. This is quite a different affair; the racist actions and rules that merely peered through the prior film’s outpouring of festive joy are now front in center in this riveting courtroom drama. By comparison, “Mangrove” is nearly twice as long and about four times as violent. We are not spared numerous brutal attacks on peaceful Black civilians by White police officers led by the hideously villainous Pc Frank Pulley (Sam Spruell). Pulley is as relentless and obsessed as Victor Hugo’s Javert, refusing to stop until he has wrongly charged the group who would be known as “The Mangrove Nine” with crimes that may send them to prison for decades.

McQueen and his co-writer Alastair Siddons begin their retelling of this true story with Frank Critchlow (Shaun Parkes), a Trinidadian man whose Notting Hill restaurant became a meeting place for other West Indians to meet and eat. With its “Black Ownership” sign proudly displayed in the window, the Mangrove announced itself as a safe haven, a place where people who were not welcome at other establishments could enjoy a meal. “We serve spicy food!” Critchlow says repeatedly to the cops who harass him about the menu and his clientele. The entrees are a point of pride, Critchlow’s tie back to what Black Londoner Barbara Beese (Rochenda Sandall) describes as “a country where you were the majority.”

“Mangrove” takes place 12 years before “Lovers Rock,” but many details are consistent between the two films, both in content and in execution. The soundtrack here is also a cornucopia of great songs, and cinematographer Shabier Kirchner’s camera again thrusts us directly into the action. There’s even a musical number that serves as a dress rehearsal for the “Silly Games” sequence in “Lovers Rock.” As for its dramatic content, a sense of community anchors the stories. These people form a group brought together by a common bond and a common enemy. They have a self-sufficiency that upsets Whites who do not wish to congregate across racial lines. The general rule amongst racists, even today, is that they not only do they not want you in their environment, they don’t want you to have a commensurate environment of your own either.

Echoing that belief system, Pc Pulley and his crew constantly raid the Mangrove, smashing dishes, destroying property and dragging its owner and his customers out into the streets and down to the station. His excuse is that Critchlow’s prior place of business, the Rio, had been privy to more illicit activities like gambling before it was shut down. Critchlow argues that his new place is not the Rio, but it does him no good. It doesn’t help that the Mangrove also hosts meetings led by activist Darcus Howe (Malachi Kirby) and Altheia Jones-Lecointe (Letitia Wright), a representative of the British wing of the Black Panther Party. (Yes, Shuri from “Black Panther” is playing an actual Black Panther here.)

It is Howe who convinces Critchlow to endorse the protest march that will result in both men being charged with a crime. The march is meant to call attention to the rampant abuse of power by Pc Pulley and the police, who continue to “raid” the Mangrove in an attempt to terrorize the patrons and put it out of business. Since he also patrols the Notting Hill neighborhood containing the restaurant, Pc Pulley terrorizes residents who aren’t patrons. He initiates newbies into his patrol by having them kidnap and beat innocent Black denizens before arresting them. When relatives file missing person accounts at the police station, their brutalized kin is returned to them as if the entire ordeal had been a joke.

The sneering way Spruell plays Pc Pulley might come off as stereotypical at first, but once “Mangrove” pulls back the curtain on how deeply corrupt the entire justice system is regarding treatment of Black people, his attitude and swagger make perfect sense. “The system crooked as a damn ram’s horn!” yells Critchlow in a moment of frustration. And it is. As such, Pc Pulley’s actions are completely believable—to describe the Mangrove’s patrons, he uses words like “thugs” and “troublemakers who should be put down.” These are the same words you can hear coming from “law and order” politicians on your TV if you turn it on right now. You know what the rule’s always been: Two minorities make a couple, but three make a riot.

The peaceful protest turns violent when the cops and antagonists of the protest collide with the marchers. McQueen’s camera is there to record the chaos, throwing the viewer completely off-kilter and headfirst into the carnage. In the aftermath, Critchlow, Howe and Jones-Lecointe are among those charged with a crime that, according to their counsel Ian McDonald (Jack Lowden), the court doesn’t even have to explicitly define. It is here, an hour into its runtime, that “Mangrove” becomes a full-on courtroom drama. The standard, expected beats and tropes are hit, but what happens within those elements makes the film so powerful and so rewarding. The lead actors also step up their game here, with each getting juicy dramatic moments that linger long after the credits roll.

In 1970, when the Mangrove Nine went on trial, they were tried at The Old Bailey, a court normally reserved for more serious crimes like those against the government. The Crown is sending a message; refusing to “know your place” in White society is a form of treason. “Mangrove” doesn’t treat McDonald as the White Savior type an American movie would have definitely portrayed him. For starters, Howe and Jones-Lecointe represent themselves in court with McDonald’s guidance, giving voice to the defendants and allowing them to cross-examine witnesses. Lowden plays McDonald as a co-conspirator gleefully sticking it to the stuffy old, outdated and proper British court system—his eyes practically twinkle with mischief at one point. Yet the most satisfying takedowns of the system come from the two members who represent themselves. Even the judge who does everything in his power to prevent a fair trial can only bend the law so far, leaving Howe to deliver extremely satisfying blows through the loopholes and rules originally designed to keep people like him down.

“Mangrove” is full of memorable characters, from Aunt Betty (Llewella Gideon), the big, beautiful cook who ranks on Critchlow and is never seen without a toothpick in her mouth, to the Mangrove patrons who stand by its owner’s side. These people are not docile victims. They fight back in numerous scenes. Critchlow argues with Pc Pulley whenever he shows up. The mother of one of the police’s initiation victims explodes with a level of righteous, violent fury that made me fear for her life. None of the Mangrove Nine look for a white knight to ride in and save them. So many times in movies of this type, Black and brown people play supporting roles in their own salvation or defense. To see them in active roles was refreshing and uplifting.

Though Wright, Kilby, Sandall and Lowden turn in fine work, the heart of “Mangrove” beats in Shaun Parkes’ performance. As a man older than his activist cohorts, he carries the weight of extra years of battle fatigue. Though proud and strong, those scrapes with the law and their losing outcomes come to bear on him. Parkes balances these two halves of Critchlow’s persona in two very upsetting scenes, one of which takes place in a holding cell and is shot by McQueen through a small slot. The slot serves as a callback to a prior scene involving visibility during Pc Pulley’s testimony. The other scene occurs when Critchlow is on the verge of pleading guilty and surrendering to the corrupt legal system that has already ground his resolve down to its very nubs. In both, Parkes’ performance is harrowing and heartbreaking.

“Mangrove” takes place in the past, but it feels like yet another evocation of Faulkner’s oft-quoted line about that timeframe. That it feels so much a product of present-day events is a sad commentary on the state of affairs in the world today. The film appears to end on a hopeful note, only to follow that note with an angrier, more discordant one that reminds us that, even if there were a vaccine for the virus of hate, the virus would mutate into a stronger disease. The long arc of the moral universe may bend toward justice, but it far too often feels like the marginalized are pushing rocks along that arc like Sisyphus, falling backwards before ever reaching that hallowed bend.

This review was filed in conjunction with the New York Film Festival premiere on September 25th, 2020. It is available on Amazon Prime today. 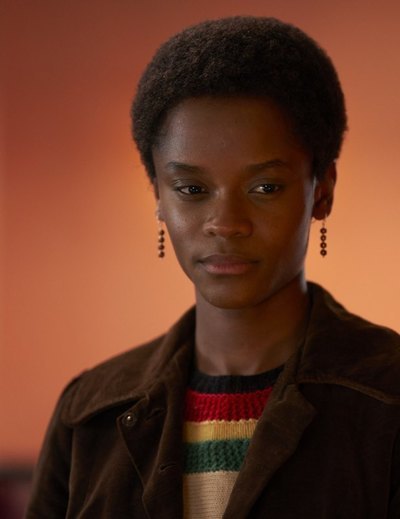