The Truth About Cats & Dogs

"The Truth About Cats & Dogs" is one of those warm-hearted, quick-footed comedies that's light as a feather, fueled by coincidence, and depends above all on the luminosity of its performers. Janeane Garofalo in this movie, like Sandra Bullock in "While You Were Sleeping," is so likable, so sympathetic, so revealing of her character's doubts and desires, that she carries us headlong into the story.

Garofalo plays Abby, a veterinarian who gives advice to pet owners over a talk radio station in Santa Monica, Calif. Her callers have the sorts of problems I suspect all pet owners secretly have. One is concerned about a cat, which won't stop licking its owner's face. Another has depressed fish. A third is trying to deal with a Great Dane on roller skates. The dog is a pretty good skater, but it has understandably grown disturbed, and won't let anyone near it.

This last caller is Brian (Ben Chaplin), and as he talks we see his Great Dane whizzing past on skates. It's the kind of surrealistic image that blindsides you; beyond language, beyond logic, it's intrinsically funny. As Abby dispenses advice about roller-skating dogs, Brian finds himself strangely attracted to her voice -- to its intelligence and tone, and to a quality that calls out to some need within him.

He asks Abby to meet him. "Why," she asks, "would I meet a listener I know nothing about except that he puts roller skates on his dog?" But there is something in his voice, maybe in his British accent, that appeals to a need in her, and God knows she's needy, since her social life is in disrepair. She agrees to meet him. He asks how he will recognize her. Abby is struck with an attack of insecurity; she doesn't think of herself as attractive, and so she describes a person who is her opposite: "I'm tall, and blond..."

She knows such a person: Noelle (Uma Thurman), her neighbor, whose romantic life is crumbling (Noelle has a bully for a boyfriend, who thinks nothing of breaking the bow of Abby's violin over his knee). When Brian calls for her at the radio station, Abby in desperation begs Noelle to go out with him -- to pretend to be her. But poor Noelle is not very bright. At least not when she is with Brian, and pretending to be Abby. When Brian goes home and calls Abby on the phone, however, a miraculous transformation seems to take place; Abby becomes a delightful, seductive, witty conversationalist, and one night she and Brian talk for hours, until dawn, gradually drawing a web of seduction and passion around themselves.

This story is yet another retooling of the legend of Cyrano de Bergerac, the pudding-faced dreamer who loved the great beauty Roxanne, and wrote her inspired love letters while stage-managing a courtship by his handsome but doltish friend Christian. The story of Cyrano was first told in the 17th century, and was made into an enduring play by Edmond Rostand in 1897. It has been remade countless times; Jose Ferrer won an Oscar as Cyrano in 1950, Steve Martin updated the story in "Roxanne" (1987), and Gerard Depardieu got an Oscar nomination for best actor for his version in 1990. Now here is Janeane Garofalo in a gender switch for the story, which plays just as well, because who cannot identify with it? Who does not like to believe that true love exists between two hearts and minds, not between two faces, and that love can overleap such trifles as physical appearance?

"The Truth About Cats & Dogs" is not simply another version of the old story, however. It includes a lot of humor that is generated by its specific situation. Much of it does indeed have to do with cats and dogs (and with a convincing demonstration of how to get a tortoise to stick its head out of its shell). And then there is the matter of Noelle, the best friend. In Uma Thurman's hands, she does not simply become a pawn, a false front for Abby. There is a poignance in her situation, because she loves Brian, too, in her way, and handles a difficult situation with unexpected sweetness.

Of course all movies like this toy a little with the odds. The movie is based upon the presumption that Garofalo is not pretty, and of course she is. She has never been allowed to appear particularly appealing onscreen, however; after an apprenticeship on "Saturday Night Live" she broke onto the movies as the Date From Hell in "Bye Bye Love" and Winona Ryder's best friend in “Reality Bites." In both roles she was blunt, abrasive and took no hostages -- although she was more likable in the second. Here we see an entire other side to her personality; a smartness, a penetrating wit, that takes this old story and adds a wry spin to its combination of romance, sweetness and hope. 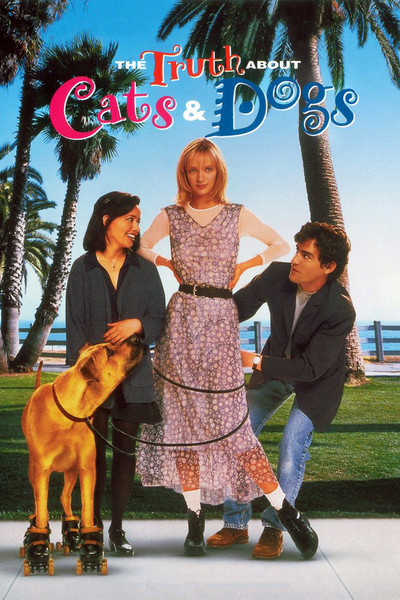