Recall, cinephiles, the end of the 1997 Jennifer Lopez vehicle “Anaconda”. After Jon Voight acts himself to death, documentarian Lopez and her cameraman Ice Cube finally discover the lost tribe they’d gone to the Amazon to film in the first place before running afoul of physics-defying reptiles. Now imagine that after the credits rolled, Ice and J-Lo decided that the best thing to do with their camera now that they’d located this mythic people, whose ancient ways of life will be totally alien to western civilization, was to make them act in a remake of Larry Clark’s youthsploitation headache “Kids”. A little self-defeating, right? You can imagine my frustration when I realized about twenty minutes into Myroslav Slaboshpitsky’s “The Tribe,” that this was more or less what I was being shown.

“The Tribe” would be a hopelessly banal arthouse wallow were it not for its setting: a school for the deaf. The movie has no spoken dialogue nor any subtitles. Everything is communicated through sign language and facial expressions. This should be a revolutionary step forward for representation of the differently abled, a window into a life that most of us could never begin to understand, but some unbelievably cynical direction makes the decision feel like a cheap novelty. Slaboshpitsky may have intended to update the silent-era melodrama for more enlightened times but the fitfully fascinating, largely infuriating result hues much closer to the infamous production code-skirting “hygiene” films of William Beaudine. Movies like Beaudine’s “Mom and Dad” used to show girls falling on hard times and getting abortions, and because the films were billed as “educational,” they could get away with showing unedited footage of pregnancies and sexually transmitted infections. “The Tribe” seems to think that because it’s showing the world in a new way, it can get away with preposterous exploitation tactics. In this way, it also brings to mind “The Terror of Tiny Town,” the infamous western with a cast entirely under 5 feet tall. Trust me, those are the last things you want in your head while watching a movie made in 2015.

What feels like mere moments after Sergey (Grigoriy Fesenko) arrives at his new school, he’s inducted into the student’s social and criminal hierarchy. And make no mistake, this is a highly sophisticated operation: girls are pimped out to truckers, strangers are beaten and robbed by mobs of kids and a series of enforcers are dispatched to collect debts on behalf of the school’s resident kingpin (Alexander Osadchiy). Sergey initially fits in perfectly, proving himself in hilariously unconvincing school yard brawls and taking part in shakedowns, but when he falls for one of the king’s prostitutes, events take a bloody left turn.

Nothing in “The Tribe” is as beguiling as Slaboshpitsky’s motivation for casting the hearing impaired. He apparently has no knowledge of sign language, which begs the question, did he have the idea to make a movie and then decided to fill it exclusively with the hearing impaired after he’d written it, or did he want to make a movie specifically about the hearing impaired and wrote this lazy movie for them? Who knows? What’s beyond question is that there is absolutely nothing in this film that is specific to the experience of deaf students. No punishment is spared the hapless kids at the film’s center. “The Tribe” favors a nervous, handheld camera that gawks at the action, rather than commenting on it in any meaningful way. The quivering tableaux constantly conjure up the image of the director trembling with excitement about all the edgy misery he’s putting both his characters and the audience through.

If Slaboshpitsky retrofitted his tiresome screenplay with sign language because he wanted to prove that everyone, no matter their circumstances, is only human, I can think of a dozen much less dimwitted strategies he might have employed. If he was interested in re-defining silent films, he could have thought of a way to present his shrill, hypocritical worldview with at least some of the savvy of silent era filmmakers.

He lacks any sense of dramatic continuity. Sergey is seen attending exactly two classes, and the rest of the film is about the escapades of the deranged student body running amok. Where are the teachers? Where are the police? If this is satire, an intentional laugh or two might have helped sell it. The only one in the movie comes when a kid is literally held upside down and shaken to disgorge the contents of his pockets like a cartoon character. And yet I can’t recall an episode of “Looney Tunes” where a teenaged girl undergoes a painful, real-time abortion or a student murders his classmates with a bedside table while they sleep. Any film attempting all three images needs a tonal identity. “The Tribe,” like a bully caught drawing naked women during 3rd period algebra, has only a smug grin to offer as justification for its crimes against subtlety.

Slaboshpitsky traffics in the worst kind of cowardly aestheticism. He’ll linger on kids having graphic sex only to punish them with a broken bottle over the head a few minutes later. It would be nice to be able to commend a film with sound design that consists largely of the rush of hands furiously creating meaning in the air or the accidentally emphasized syllables that slip out during intense conversations, but it can’t go ten minutes without indulging in one horrifically boring act of degradation or another. The many sequences of the teens communicating a mile a minute with their hands is thrillingly cinematic enough without recourse to sex and violence. The hearing impaired deserve to have their experiences rendered cinematically. They also deserve better than the shamelessly tawdry likes of “The Tribe.” We all do. 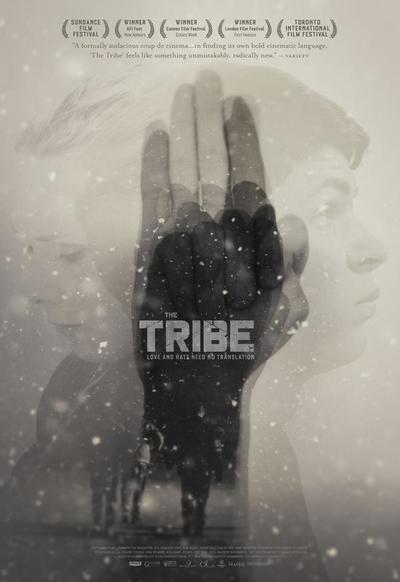