Sigmund Freud would be, all things considered, an excellent wingman. A more introspective one than usual, but by trade the psychologist is certainly one of the best listeners you could ask for. That’s not a thought I had watching “Bill and Ted’s Excellent Adventure,” and yet it is one that came to me during “The Tobacconist,” a movie that bases part of its drab period fiction on the fantasy of getting Freud’s friendly advice, all for the price of a good cigar. But the script, based on a revered novel from Robert Seethaler, concerns more serious themes than Freud's off-hand advice, though its shallow storytelling gives little to contemplate.

Played by Bruno Ganz, this version of Freud has the trademark circular glasses and assured disposition, but there’s an emphasis here on how much he loves a good cigar. Such a taste brings Freud into the life of Franz (Simon Morzé, a 17-year-old who has recently moved to the big city of Vienna, leaving behind his dear mother and their small village. Franz is seemingly new to how adults treat each other, and ipso facto that the world can be mighty cruel. He expresses this in one of the film’s few poignant lines of dialogue, even for a script with Freud as a supporting character: “Maybe the times were always strange, and I just didn’t notice.”

The focus of “The Tobacconist” is on Franz and his coming-of-age during this period, and a whimsical enlightenment hat comes with him appreciating his dreams thanks to his new friend Sigmund, and the pleasure of a cigar, thanks to his boss Otto (Johannes Krisch) and his shop. But along with its drab color palette, too much so even for the cloudy plot developments ahead, the story is frustratingly surface-level. The spare moments that have Otto speaking philosophically of a great cigar’s power—matched with an impressively detailed shop—don’t inspire much wonder, as if the crew didn’t get the memo that a love of cigars is meant to suck us into the story, as if it were an art form.

There’s a little more imagination to the movie’s reoccurring blue-and-gray dream sequences, where overt Freudian concepts are thrown in like codes. Franz has a dream of waking up naked, or of being on a ship moving backwards that’s about to hit an iceberg. These dreams, and their significances are a glaring example of "The Tobacconist" hitting its drama right on the nose, leaving Morzé not have much to work with aside from playing up just how green he is to the rest of the world.

It only gets worse when “The Tobacconist” fully commits to Franz’s infatuation with a Bohemian girl named Anezka (Emma Drogunova), whom he meets at a fair. The big conflict with this arc of highs (dancing close after just meeting) and lows (she disappeared with his money shortly after) is that Anezka works in a cabaret, and in general has no control over her own body, which Franz selfishly translates as her being emotionally unavailable. Ever the budding romantic, but not the type who you'd want to be within even five feet of their first novel, Franz becomes infatuated with Anekza and her gap tooth, stoking up buddies Sigmund and Otto about one who got away. A legitimate beat in the story then involves Franz tracking her down to a cabaret, seeing her performance, and storming out in a huff. However much this fairly serious coming-of-age story is fully aware of Franz’s naiveté, the size of his heartbreak is far from sympathetic.

In the background of all of this, the Nazis moving into Vienna, and anti-semitism experiences an outbreak, with blood-red Swastika flags taking over more and more walls and plazas. The cigar shop is attacked with someone called Otto a “Jew-Lover,” and later on the cabaret goes from joking about Hitler to joking about Jews.  It's the time for Freud to leave, and Franz is fashioned like one of his last friends, who encourages him to go to London. As with the other larger themes, “The Tobacconist” touches upon this enormous experience, but seems to have little to say about it.

As in a climactic moment in which Franz seeks Sigmund for advice, there might be a joke that Freud doesn’t have a ton of great wisdom here, except to ask questions. It also might be kind of funny that his advice to Franz about women virtually adds up to “go get ‘em, slugger,” because even Freud is unsure about women want. But it's all quaint, if not cute, at best. 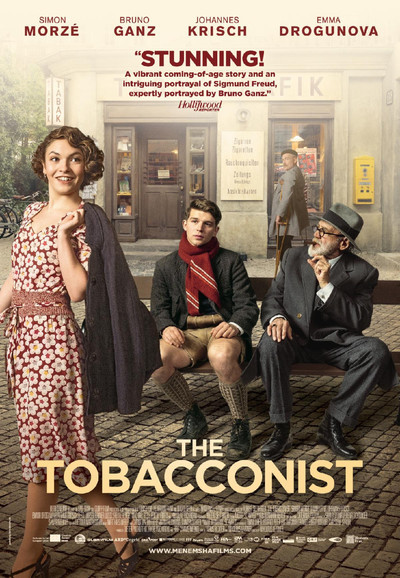