The Times of Bill Cunningham

The minute Bill Cunningham starts talking in this charming documentary is the minute you fall in love with him. Mark Bozek’s far-reaching but concise film about the New York Times correspondent who considered himself not a photographer at all but a fashion historian—this despite the fact that the photographs that were the main part of his weekly “On The Street” column in that newspaper were exquisite—is structured around a 1994 interview Bozek made with Cunningham in 1994, when Cunningham was in his mid-sixties. (He died in 2016 at the age of 87, and was still riding his bicycle around New York City snapping shots for his column until that time.)

In the interview he’s still boyish, with an excited voice and almost buck teeth. He’s still curious and animated about everything and laughs easily and often. He recounts being raised in Boston by strict conservative Catholic parents and discusses their befuddlement in his interest in fashion—no one else in his family, either immediate or extended, ever had a sou of an inclination in that arena. Cunningham moved to New York in the ‘40s to be a milliner. He worked for the store Bonwit Teller, he made hats for Ginger Rogers and Marilyn Monroe, he fell in with the fashion house Chez Ninon. He dyed a Balenciaga dress black so that Jacqueline Kennedy could wear it to her husband’s funeral.

He had a deep knowledge of couture lore and semiotics, especially in relation to high society. He remembers being disappointed that Hollywood figures in real life had no “style” in their personal lives, as opposed to people such as “Mrs. Astor” and such, who would, I presume, fall out of bed in Dior or whoever. He’s so ingratiating that when he outlines this stuff, classism seems amiable. Which is not to say he was an uncritical classist. He discusses how his work on the streets sensitized him to homelessness and other sufferings the city held for people.

Constantly self-deprecating, Cunningham recalls how employers and friends were constantly encouraging him to do something else. After being gifted with a camera, he found it. Setting himself up in a spartan studio-with-loft at the Carnegie Apartments—where he lived, sleeping on a twin bed mattress placed atop a row of storage crates—he got on his bike and rode, taking pictures of what people were wearing on the street. Then flying across the Atlantic, his changes of clothes in plastic deli bags, to shoot Paris runway shows.

He was an unusual person. He keeps up a cheerful front but can break down in tears in less than two seconds when asked a question that hits him a certain way. He survived the AIDS crisis—he never actually addresses his personal life, or even whether he had one, in the movie, and neither does the narration affectionately provided by Sarah Jessica Parker—but is broken up remembering it. It is revealed that he donated most of what he earned over the years to AIDS charities, and to the Catholic Church.

We won’t see his like again. Which is a good reason to rejoice for this engaging portrait of him, the second documentary about him in the space of a decade. The first was 2010’s “Bill Cunningham New York.” He didn’t see that one. He did go to the premiere, and photograph the attendees, though. 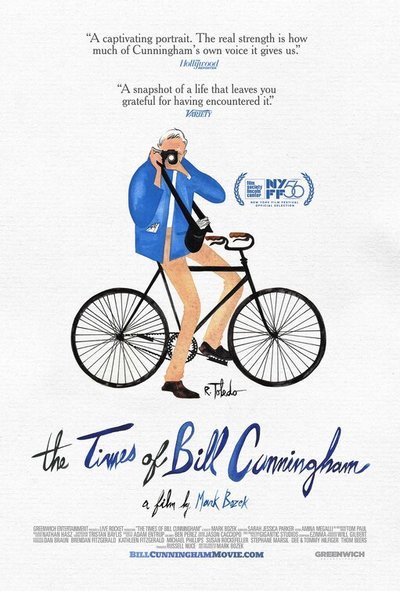 Bill Cunningham as Himself (archive footage)