There’s a story told several times in Ido Fluk’s “The Ticket.” It opens the film and is repeated by its protagonist, James (Dan Stevens, riding a hot streak with FX’s “Legion” and the smash hit remake of “Beauty and the Beast”). It goes roughly like this: A man prays every day to win the lottery. He does this for years. Eventually, an angel goes to God and says, “Can’t we just let him win finally?” And God says, “I’d love to. But he’s never bought a ticket.” At one point, James’ friend Bob (Oliver Platt) tells James that he doesn’t get the story he’s been telling over and over again. I’m not quite sure the movie gets the story it’s trying to tell either. It’s just one of those films that one is constantly wishing would coalesce into something tangible and concrete, but it keeps slipping through your fingers. Like the parable that James arguably doesn’t understand, one wants “The Ticket” to strike harder, take more chances, and simply be more memorable.

James was blind yesterday. He is not today. He wakes up in the opening scenes of the films to a bright, vibrant world that he can see. His doctors have little explanation as to why his pituitary gland has shrunk, allowing him to see again. His supportive wife Sam (Malin Akerman) is understandably floored by the revelation—although Fluk and co-writer Sharon Mashihi don’t do nearly enough to ground or define the relationship. I understand the desire to open the film on the day that James can see—it allows for the camera to replicate his blurry vision coming into focus—but the movie relies a lot on telling us about James & Sam’s relationship instead of showing us their foundation before James’ new gift creates cracks in it.

The first crack comes when James notices that his son Jonah (Skylar Gaertner) has a black eye. It’s the kind of thing he notes that Sam wouldn’t have told him about and he never would have known about a bully situation at his school. The implication, more than once, is that Sam has been controlling James, and now she can’t be in charge as much as she used to be. The second crack comes when James notices that co-worker Jessica (Kerry Bishé) is stunningly beautiful. And Jessica starts to grow attracted to James as well when the newly confident young man becomes a shark at the office. James works for a company that buys real estate at cheap prices from people in a position where they need to sell. And he develops a rather insidious way to bilk people of their property that’s basically a con job in which James gives speeches about financial advice that attempt to push them toward selling.

So, in relatively short order, James becomes superficial. Or does he? Was James always kind of an asshole and sight only makes that part of his personality easier to feed? Again, this is an interesting angle into the story of “The Ticket” that’s left relatively unexplored, partially because of the structure of the piece, but more because it feels like Fluk & Mashihi are just too hesitant to really make James a villain. If you’re going to tell the story of a man who tears his seemingly-good life apart when he’s given a gift from God, we need to feel the joy of the gift and the pain of the fall. This is essentially an Icarus tale without the feeling of flight or the sensation of burning.

So why bother at all? Well, Dan Stevens is gonna be something big. It was kind of clear on “Downton Abbey” and “The Guest,” but his work in “Legion” and this mark another step up the career ladder. He imbues James with layers of back-story and subtext that keep the film working in spite of its narrative thinness. Like his character’s ability to sell a bad deal, Stevens is one of those actors who is so charismatic that they can sell a bad movie. One only wishes the rest of the film knew what to do with him. 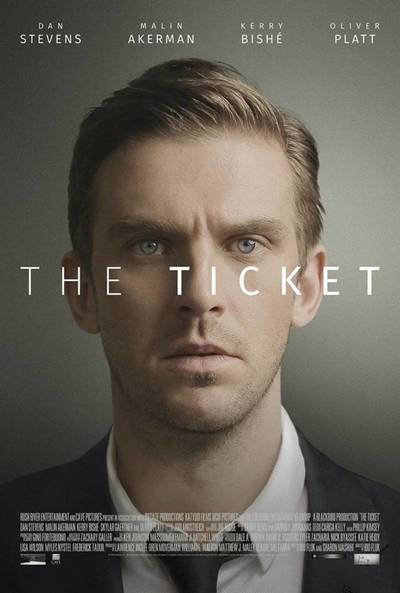