The Thousand Faces of Dunjia

I'm sad to report that the unnecessarily busy Hong Kong action-fantasy "The Thousand Faces of Dunjia" confused the hell out of me. This is not, however, just because I was (and am still) unfamiliar with some key astrological concepts, and related character types that the film revolves around. Rather, this big, splashy blockbuster is perplexing because it's full of loosely-connected incidents that are rarely character-driven, or even narratively intelligible beyond a point. The film's plot, which concerns the super-powered Wuyin clan's attempts at stopping a hostile alien invasion, feels simultaneously underdeveloped and overstuffed. New heroes, villains, locations, and side quests are introduced every few minutes. And the only thing propelling the film's plot forward through its many confusing tangents is a lot of bad computer-generated special effects. The fact that the film isn't even visually impressive is especially disappointing given that "The Thousand Faces of Dunjia" was directed by legendary action choreographer turned director Woo-ping Yuen ("True Legend," "Crouching Tiger, Hidden Dragon: The Sword of Destiny"). And the plot of the film is equally underwhelming once you realize the film was produced and scripted by iconoclastic action filmmaker Tsui Hark ("Detective Dee: Mystery of the Phantom Flame," "Knock Off"). A lot of things transpire in any given scene, but none of them will make you care what happens next.

Let's start from the top. There are two yin/yang type elements that everybody in this film is at least superficially concerned with: "Qimen" and "Dunjia." While "Qimen" has something to do with the passage of time, "Dunjia" is a style of astrological divination. A skimpy voiceover introduction attempts to distinguish these two concepts, but this preface doesn't sensibly inform the characters' actions in a way that somebody who's only using the events of "The Thousand Faces of Dunjia" as their primary source of information can understand. It's like watching an Avengers movie, except all the callbacks, and character motives are only comprehensible if you're familiar with the comic books.

Things only get more convoluted, and confusing from here. The Wuyin clan are racing against time—and logic—to stop a creepy red tentacle plant-alien from manipulating the Dunjia device (There's only one?), and five sage warriors (Where'd they come from?) from using a weapon called The Destroyer of Worlds (Who made this?) to ... uh ... presumably take over the planet for themselves? The Wuyins are guardians of the Dunjia thingy, but they can't stop the ... alien guy (or girl) ... from rampaging across multiple disparate locations that may or may not be geographically far apart. It's hard to tell since time passes episodically in "The Thousand Faces of Dunjia," and there's no great urgency to the film's plot.

There are some minor personal connections that provide a skimpy emotional tether for the Wuyin clan's quest to stop that one completely non-threatening-looking monster from wreaking more plot-related mischief. Headstrong fighter Dragonfly (Ni Ni) has a chaste romance with bookish doctor Qingyun Zhuge (Peng Da), but shy shape-shifting monster-lady Circle (Yan Liu) has a thing for Zhuge too. Also, Dragonfly's stalwart leader (Bai Wu) is there too, but he doesn't do much. Wait, what was I saying, oh, right, the characters.

The best scenes in "The Thousand Faces of Dunjia" feel as small as anecdotes, but are as detailed as a chapter in a rich fantasy novel. I loved the sequence where Zhuge bluffs, and hustles his way into a subterranean dungeon to find and free Circle, formerly a nameless prisoner held for reasons that are never adequately explained. These scenes reminded me of the best moments in the classic Chinese action-fantasy "Journey to the West," one of the most popular novels in China.

Still, thinking about "Journey to the West" only reminded me of everything "The Thousand Faces of Dunjia" gets wrong since Hark and Yuen's film was arguably only made because of the financial popularity of a recent cycle of "Journey to the West" adaptations, all of which are very loose riffs on their decades-old source material. You don't need to have done homework to enjoy the superior "Journey to the West" films, including "Journey to the West: Conquering the Demons," a loose adaptation that Hark directed the sequel to. These films are narratively accessible, emotionally involving, and visually impressive. The same cannot be said of "The Thousand Faces of Dunjia," a confusing collection of ideas that never comes together in a meaningful, or even superficially compelling. Even the computer-generated action scenes feel like they were assembled by a committee of dedicated, but uninspired of computer artists. You don't always have to understand what's happening in a film to enjoy it. But it certainly helps when there's nothing else noteworthy going on. 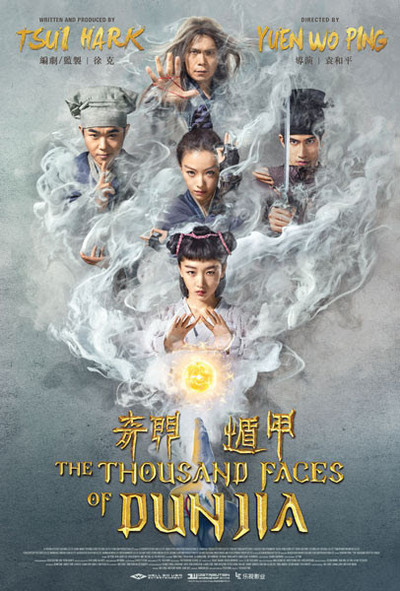