Journey to the West

By turns daffy and dazzling, awkward and artful, "Journey to the West" takes an ancient tale and gives it contemporary flair.

In adapting one of the Four Great Classical Novels of 16th-century Chinese literature, co-directors Stephen Chow and Derek Kwok have crafted a rollicking fantasy—a crazy fable that ultimately reaffirms the power of faith. Their giant martial-arts set pieces are nothing short of extraordinary; lively and lovely, they're filled with both great intricacy and innovation.

These scenes, which can be both wildly slapsticky and minutely graceful, provide the film with a winning, driving energy. And then when they're over, the characters unfortunately have to talk.

"Journey to the West" follows a goofy but sincere Buddhist monk named Xuan Zang (Zhang Wen), a young demon hunter who must vanquish a series of foes en route to his ultimate showdown with the notorious, shape-shifting Monkey King (Bo Huang). When we first see him, in the film's lengthy, tour-de-force opening sequence, he's helping a bunch of frightened villagers take down a giant, hungry fish that's leaping from the water and wreaking havoc. The comedy has a Mel Brooks-like sensibility about it that's appealing; it's playful in a deadly-serious situation. (Chow also directed the pleasingly cartoonish "Shaolin Soccer" and "Kung Fu Hustle.") But the choreography is undeniable: a breathtaking series of near misses and tricky balancing acts.

Xuan's preferred, absurd method of attack, per his mentor, is to tame the beasts by singing lullabies to them from a book called "300 Nursery Rhymes." The sweetness and innocence within Zhang's performance feels very Keanu Reeves circa "Bill & Ted's Excellent Adventure," complete with a mop of wild hair. This is actually a compliment.

The rival demon hunter he keeps running into, a catlike creature known as Miss Duan (Qi Shu), favors a more direct strategy: She takes them on through balletic physical battles with the help of a magical golden bracelet—"The Infinite Flying Ring"—which she can duplicate countless times. As she flings the circles through the air like lethal boomerangs, her targets explode in a burst of dust. It's an awesome sight to behold.

But then "Journey to the West" has an episodic structure that saps it of much of the momentum it gains during those thrilling set pieces. Xuan and Duan have one adventure, then another, than another. They meet one eccentric character, then another, then another. There's a tiger demon and a pig demon. There's a preening royal known as Prince Important (clearly a friend of President Business from "The Lego Movie") and an elderly man known as the Almighty Foot, whose shriveled limb expands to an enormous size when the time comes for him to stomp on his enemies. (He might have the best catch phrase ever: "Today, you will die by my almighty foot!")

Along the way, Xuan and Duan trade some stilted and truly cringe-worthy dialogue—initially about their conflicting strategies, eventually about the half-hearted romance that develops between them. Out of nowhere, Duan finds herself falling hard for her unlikely companion and throwing herself at him in increasingly elaborate ways.

Maybe it's written that way on the page, but on the screen—especially in a film that benefits from such a strong and fearless female—the sudden need to have a man define her is a disheartening cliché. Also, some of the interactions between the male characters carry more than a whiff of homophobia which seems archaic. Again, maybe that's from the source material. But a film that clearly went out of its way to appeal to modern audiences perhaps could have gone just a tiny bit further. 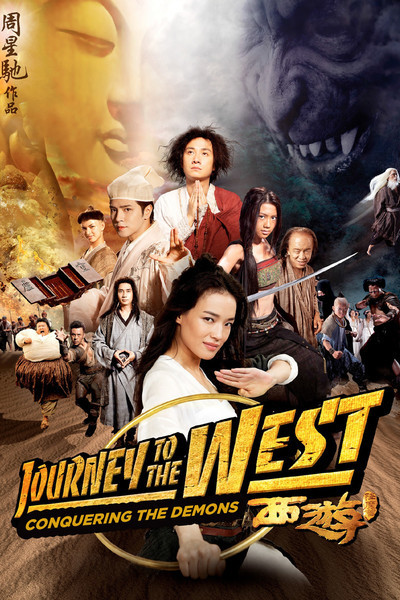