The Tale of The Princess Kaguya

Now nearly 80 years old, the Japanese animation director Isao Takahata has ever forged his own path over the course a half-century of work. A legendary perfectionist, the co-founder of Studio Ghibli (also the home of the great Hayao Miyazaki) has broken molds by, for example, creating an animated feature completely lacking in any “fantastic” element, the tender 1991 “Only Yesterday.” His new film, his first in 14 years, is a staggering masterpiece of animation based on a very old Japanese folk tale. “The Tale of The Princess Kaguya” is both very simple and head-spinningly confounding, a thing of endless visual beauty that seems to partake in a kind of pictorial minimalism but finds staggering possibilities for beautiful variation within its ineluctable modality. It’s a true work of art.

The movie begins with a gruff bamboo cutter in a forest. The colors are pastel and watercolor; the drawing resembles charcoal sketches. Cutting away at bamboo, the farmer sees a shaft of light; then a plant yields a doll-like creature that, once he spirits it off to his cabin to show his wife, transforms into a human baby. Despite being in middle age, the wife discovers she can feed the baby (the breastfeeding depictions are very matter-of-fact); the little girl is growing at an accelerated rate. She soon starts playing with some of the males who live in the neighboring area; they nickname her “L’il Bamboo.” The leader of the boys is the slightly older Sutemaru, and all seems right for L’il Bamboo in the pastoral paradise where she runs and plays and laughs and sings a song about the nature of all living beings, a song she can’t remember having learned but which she’s always known.

Her adoptive pop has other ideas, especially after “the gods,” as he believes, bestow a lot of gold upon him; he goes and buys a castle in the capital, and venture to make the little girl into a genuine princess. L’il Bamboo’s heart breaks, but she wants to honor her father’s wishes. Here’s where the movie’s story takes a rather infuriating turn. As the girl, soon given the name “Kaguya,” is trained and then visited by a quintet of ostensibly noble suitors, the story turns into a kind of nightmare of patriarchy. Kaguya, bright and talented and beautiful, suffers through multiple squelchings of her own desire, and then acquiesces to the venal wishes of the authority figures she loves. The movie is so emotionally roiling because it, too, is of two minds. It wants Kaguya’s unfettered spirit to have its way, but it also recognizes the almost primordial obligation that binds us to family and convention. Kaguya’s got her oafish father’s number, and when she stands up to him it’s thrilling: “If I see you in a courtier’s cap I’ll kill myself,” she tells him calmly at one point. And the father’s ignorance is startling: he truly believes that what he’s putting Kaguya through is for her own happiness, that this status is something she covets as much as he. Things take an even more jarring turn once Kaguya finds out just where she’s from.

Even if you have trouble hooking into the scenario’s cultural idiosyncrasies—the concerns of this movie, while not “Japanese” in and of themselves, are addressed in a very specifically Japanese way—every frame of “Princess Kaguya” is astonishingly beautiful. What looks rather rudimentary at the film’s opening is revealed to have a depth that never stops yielding beauty; check out the shadows that fall over the bamboo cutter as he runs from the forest with his discovery cradled in his arms. The movement animation of the baby “L’il Bamboo” is some of the best depiction of infant development ever in any medium: so much study, care, and artistry. Creatures both found in nature (insects, birds) and not (storm clouds that become dragons) are drawn with remarkable sensitivity.

I believe the movie is best experienced with its original Japanese-language soundtrack; its widest release, however, will be in an English-language dub featuring James Caan voicing the bamboo-cutter, Mary Steenburgen as the wife, and Chloe Grace Moretz as Kaguya. Due to a screening snafu I was able to experience about fifteen minutes of this version and can report that it sounds as if these performers honor the material well, so either way, don’t miss this if you are an animation fan. 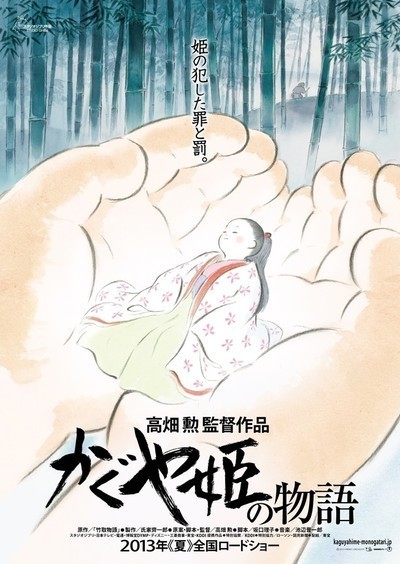