Louis Leterrier’s “The Takedown,” a sequel to the 2012 French buddy cop comedy “On the Other Side of the Tracks,” starts by recognizing that it’s in some trouble. Why pump out yet another "Lethal Weapon"-inspired narrative when we're starting to reckon more openly with structural problems in policing? Letterier, previously of “The Transporter” and “Now You See Me,” answers this problem with ideological and visual gibberish, hoping to create at least the illusion of a high-energy distraction. The movie's clumsy dazzling only shows the desperation within, both for Letterier and for what perpetuates the heroic cop story nowadays.

Omar Sy returns to this now-franchise as Ousmane Diakité, the kind of cop who can hold his own even when he's outnumbered and in a cage. So much, so that he beats up a hulking MMA fighter in his own ring and ends the scene on a triumphant note where he makes the crowd shout, “The police! The police! The police!” Ousmane’s beatdown goes viral and inspires the Paris police to use him and his Black skin for their chintzy social media campaign, something he scoffs at. He knows what they’re doing—trying to cover up the gross actions of other cops, unseen in the film but very visible in real life—but the movie itself drops this angle and takes on the duty of police PR itself. Meanwhile, Ousmane's former police partner François Monge (Laurent Lafitte) is shown babbling to and then bedding his therapist, establishing himself as both the womanizer of the duo and the generic face of generic whiteness in policing.

All of this lip service, this winking, nearly kills the low-level amusement of "The Takedown" when the plot finally kicks off, after a severed body is discovered inside a train. Reunited by the case, Ousmane and François investigate with the help of a woman named Alice (Izïa Higelin), who sets off both of their boyish inabilities to talk to a woman they find attractive.

Alice becomes their tour guide of sorts through the town of the crime, a place so conservative that the mayor is a not-so-thinly veiled fascist. As the movie is saying, one may not like cops, but at least they’re not out-and-out skinheads who even work at a security company that has a pseudo-SS symbol for a logo. Anywho, the top half of a guy named Kevin leads to some kind of thing about a super drug, one of many under-cooked story pieces in this messy script from Stéphane Kazandjian. There's a larger conspiracy at hand, albeit expressed with such touch-and-go ideas that there are little emotional stakes even when a house for immigrants is targeted for a bombing.

The movie does not only have an image problem with its cop optics, but also the big, explosive set pieces that Letterier works overtime to make visually incomprehensible. Making the first film look like a Sundance drama in comparison, "The Takedown" is packed with overzealously swooping, shaky cinematography, or jarring cuts that freely take us close-up during a scuffle and then suddenly put us in the sky, suggesting a personal beef between the editors and the fight choreography team. This flurry becomes sinfully ugly when mixed with the camera’s penchant for wide-angle lenses that freely distort whatever is on the side of the frame, a terrible mix with a constantly moving camera. It’s another degree of ridiculous, dizzying, "slick" French action filmmaking, a direct descendant of the 14 cuts it took for Liam Neeson to jump a fence in Olivier Megaton’s “Taken 3.”

And taking “The Takedown” on the merits of its two stars, their performances are more or less stapled together by generic buddy-cop comedy banter, including an eye-rolling moment when dopey François puts his foot in his mouth regarding his whiteness, the two sharing an awkward beat in which he realizes what stupid complaint he just made about his privilege. It’s not usual that a movie with this many car smashes leaves you wanting less action and more talking, but our two heroes don’t have much of a personality beyond their appearances (the “mismatched” angle is shrugged off). For all the movie jokes about Ousmane being a tokenized Black cop, the story then does not give him much of an interior; and for the set-ups with François, it’s jokes about his poor sexual boundaries in the workplace at best. There’s just no room for any real chemistry between these two, like a rom-com with hardly any spark.

Why are we so enamored with cop stories? Why have we empowered them with being our fantasy action heroes, in turn fetishizing when they have to do things “their own way”? “The Takedown,” as scatterbrained it is, brings this up but then is too cowardly to follow through on it, treating structural police problems as a trending topic that Sy’s charm and Lafitte's cringing whiteness can help us forget for two nauseating hours. “The Takedown” works overtime to uphold the façade of heroic policing in the most generic way possible, for god knows what greater good. 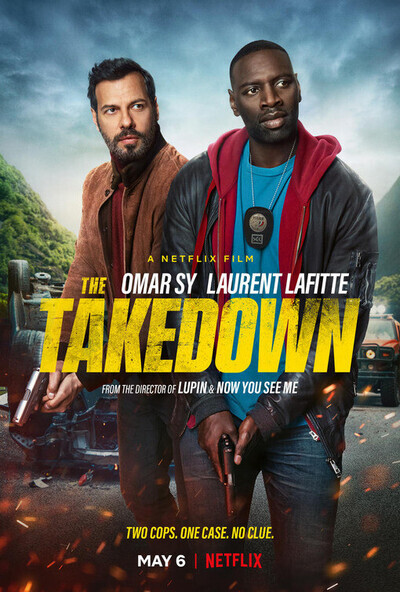