After racking up a daunting body count in both France ("Taken") and Turkey ("Taken 2"), the destructive Mills family (who really should consider going into the witness protection program, not only for their own safety, but for ours) turn their sights on the sunny freeways of their home town, Los Angeles, in "Taken 3". Starting with the unimaginative (and, as it happens, incorrect) title, "Taken 3," directed by Oliver Megaton, is both lazy and tremendously overwrought. Anchored, as always, by a sincere performance by Liam Neeson, as well as the additional gravitas provided by Forest Whitaker as the police officer tracking Neeson down, the film pulses with indifference. "Taken" and "Taken 2" were preposterous, but entertaining: care had been given to the plot as well as the filming so that they worked as thrillers. Many didn't care for the sequel, but I liked it a lot, especially the cinematic use of the architecture in Istanbul, which showed a real understanding for how action happening in a very specific landscape can be exciting and suspenseful. "Taken 3" doesn't want to take the time to set things up carefully or clearly, so that while you can perceive that you are on the highway out to Malibu, or careening along the 405, the film doesn't use the specific landscape or architecture to help tell its story. It's just a frantic, flash-cutting frenzy. Even the slower, more intimate family scenes feature so many swooping-up-from-below shots and so many sudden inserts that moments (emotional or physical) are never given a chance to land.

"Taken" and "Taken 2" were abduction dramas, featuring first the abduction of a daughter, then an ex-wife, by nefarious international criminals. "Taken 3" also has international criminals, but changes the formula, and from here on out there will be spoilers. Bryan Mills (Liam Neeson) lives in Los Angeles, playing golf with his Special Ops buddies, and providing support to his ex-wife Lenore (Famke Janssen), who is unhappy in her marriage to sweaty Stuart (Dougray Scott) and reaches out to Bryan for comfort and bagels and maybe something more. Their daughter Kim (Maggie Grace) is in college now, and Bryan still thinks of her as a baby (even though her professional stunt-driver skills in "Taken 2" should have clued him in that she is a highly capable human, not to mention her ability to run across the tilting rooftops of Istanbul, lobbing grenades at innocent parking lots in order to signal her location). But then Lenore shows up dead, and Bryan is falsely accused of her murder. Instead of staying around to defend himself against the charges, he disappears into Los Angeles, a fugitive on the run.

Because Bryan is the most resourceful man on the planet (he makes MacGyver look like a slacker), his is not the desperate everyman-on-the-run plight of Richard Kimble of "The Fugitive". Oh no, Bryan hacks into security cameras, downloads GPS information from stolen cars, has access to world-class weaponry as well as the support of his super-spy friends. Cop Franck Dotzler (Whitaker) pursues Bryan, always one step behind, frustrated, but also somewhat amused at the ingenuity of his foe. Dotzler warns his cops to not underestimate Mills; he's a ghost, a phantom, a mastermind! Bryan is determined to run his own investigation and anyone who gets in his way must be demolished. That includes a poor hospital security guard, the students at Kim's university and the rent-a-cop hired to drive Bryan back to the station.

Granted, nobody enjoys the "Taken" films because they are grounded in reality, but "Taken 3" pushes that envelope so far that the overall effect is numbing. Bryan is so indestructible that he survives a car crash that nobody could survive (with nary a scratch on him), and is able to dodge the bullets of an automatic weapon firing at him from only three feet away.

The number of cuts per scene is astronomical, ensuring that the audience never gets a chance to orient itself in the environment, or, for that matter, care about what is happening. Liam Neeson is impressive physically, but the fight scenes are filmed with so many cuts that the action itself is never clear. In one car chase scene, involving multiple police cars, an 18-wheeler, and the various commuters on the road, a car commandeered by Mills ends up driving the wrong way down a crowded freeway. At least I think that's what I was seeing. The coked-up editing makes it impossible to tell, and it made me yearn, longingly, for the classic car chase scene in "To Live and Die in L.A.," also involving a car barreling the wrong way down a freeway. That visceral, gripping scene in "To Live and Die in L.A." was filmed so specifically that the audience never loses its orientation in space. Effective car chase scenes involve care in the execution: it's not enough to show a car flipping over in slo-mo, surrounding it with 100 quick edits designed to disorient. Ironically, that approach ends up making it look like the movie is trying too hard.

The best moments in "Taken 3", strangely enough, are the repeated swooping aerial shots that move the predictable plot forward. For a moment, just a moment, the camera stays on one thing (the freeway, the downtown skyscrapers, a pier on the beach, the canal) … and, for that moment, the film is gracious enough to provide us with visual perspective, to let us know where we are in space. Unfortunately, those aerial shots also give us time to think thoughts like, "Maybe I should pop in 'The Fugitive' or 'To Live and Die in L.A.' Those movies did it better." 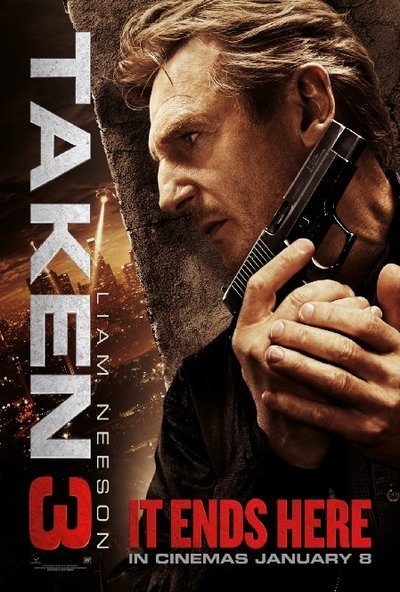 Rated PG-13 intense sequences of violence and action, and for brief strong language