The opening moments of David Wnendt’s “The Sunlit Night” are excruciating to sit through, as its heroine Frances (Jenny Slate) watches her latest abstract painting being eviscerated by three pompous critics. They find the artwork lazy, pedestrian, devoid of complexity and stripped of anything interesting. When asked if she has any questions for them, Frances laughs, “No, thank you,” before quickly excusing herself. It’s in this moment where we are instantly reminded of Slate’s endearing screen persona, which somehow becomes even sunnier when she strives to make the best of a lousy situation, as her character did with an unwanted pregnancy in Gillian Robespierre’s 2014 gem “Obvious Child.” Frances’ decision to laugh rather than burst into tears seems indicative of her resilience in the face of disaster, shrugging off defeat in the hopes that her next effort will be better received.

I imagine Wnendt and his editor Andreas Wodraschke may have adopted a similar attitude when their initial cut of the film—unseen by me—debuted to poor reviews at the 2019 Sundance Film Festival. Since then, about 24 minutes have been removed from the picture’s running time, which makes the bookended sequences of critical analysis designed to affirm Frances’ supposed evolution hit all too close to home. “Did I get where I needed to go?” Frances asks herself with bated breath before her fearsome judges recognize that she is indeed “getting somewhere.” Could the same be said for the film itself? It’s a bit of a mess, to be sure, and though I fear some necessary contextual scenes may have been stripped away in the reedit, what remains on the screen is gorgeously photographed, well-acted and a little more thoughtful than one might expect.

On a certain basic level, “The Sunlit Night” offers the sort of pleasant escapism typified by Audrey Wells’ undervalued “Under the Tuscan Sun,” where its female protagonist travels to an exotic locale after a jolting turn of events to rediscover herself while finding unexpected romance. What makes Wnendt’s film a somewhat tougher sell is the fact that its setting is less of a tourist destination than a purgatorial valley warranting the title, “Under the Unending Norwegian Sun.” For reasons the movie never gets around to specifying, Frances breaks up with her boyfriend—whom we only glimpse in the opening credit sequence—before moving back in with her parents, Levi (David Paymer) and Mirela (Jessica Hecht), both artists confined in jobs that stunt their creativity. Levi has a rather insufferable habit of making everything about himself, disrupting the news of his daughter Gaby’s engagement with the bombshell that he and his wife are splitting up. Perhaps there’s no secret as to why Frances is aggressively upbeat, since her new gig in ever-sunlit Norway is clearly preferable to sharing a cramped studio with Levi, who carelessly knocks over her easel while inflating an absurdly large blow-up mattress.

Faced with no desirable prospects, Frances decides to aid a fellow critically reviled artist, Nils (Fridtjov Såheim), in completing an installation project in the Lofoten islands, a job she likens to “arctic detention at the edge of the world.” The dynamic she forges with Nils is not all that far removed from the one between Heidi, the tirelessly upbeat heroine of Johanna Spyri’s timeless novel, and her distant, antisocial grandfather. Nils has no inkling of how to engage with Frances’ talkative demeanor, apart from drowning out her voice with his car radio, though he does order her to strike the word “awesome” from her vocabulary, since the term isn’t befitting of their tedious endeavor. The script by Rebecca Dinerstein, which she adapted from her own novel, contains some wonderful dialogue passages that artfully visualize how the characters perceive one another, such as when Nils eventually realizes that he and Frances complement each other like the colors orange and blue (the latter of which is seen when shifting one’s gaze from an orange hue to a white wall).

What I enjoyed most about the film is how it illustrates the ways in which we view life through the prism of art in order to reach a deeper understanding of it. Frances will often compare new faces and locales she encounters with various painted marvels from her mental scrapbook that flash across the screen, a skill that brings her particular comfort when she is far from home. Serving as a living embodiment of Van Gogh’s postman—who Frances dubs “more beard than face”—is Haldor (Zach Galifianakis), a man from Cincinnati currently living in the island’s historic viking village, and who insists on being referred to by his character name, “The Chief.” Galifianakis’ hammy comic relief would’ve been a natural fit in Will Ferrell’s recent Eurovision spoof, and each of his scenes threaten to turn the film into a Christopher Guest-style portrait of self-important cluelessness (I chuckled when Haldor tasked the only Norwegian member of his crew with being his thankless instrumental accompaniment).

Frances’ bright red attire stands out against the muted landscape as conspicuously as the angelic face of a clerk (Luise Nes) she finds working behind the fridge at a grocery store. Though their scenes together are brief, I felt that this connection served as the heart of the movie, since Frances finds complexity and Renaissance-era beauty within this woman that the rest of the world appears to have overlooked. I was much more intrigued by the suggested romance between Haldor and the clerk than I was by the contrived love story involving Frances and another lost soul, Yasha (Alex Sharp). After being jarringly introduced to us in one of the few scenes not viewed from Frances’ perspective, Yasha’s tragic backstory is fed to us through a rushed expositional montage that never invests us to the degree that would allow certain subsequent moments to swell with emotion. I also didn’t buy the farcical situation that the pair wind up in, and it’s a pity that more wasn’t done with the character of Yasha’s mom, played by the ever-welcome Gillian Anderson, whose mother on Netflix’s “Sex Education” could’ve easily provided the couple with some pointers on how to avoid this clichéd embarrassment.

So yes, “The Sunlit Night” is somewhat marred by its share of flaws, but it also has enough redeeming qualities to make it worth a look. The film isn’t aiming for the subversive fun of “Obvious Child” or even Wnendt’s own 2013 Sundance hit, “Wetlands,” and that may disappoint their respective fans. Yet I appreciated its tender approach to exploring the liberating power of a shift in perspective, whether it’s in regards to arduous work or the sense of entrapment one has in detention—or quarantine. Art can literally preserve one’s sanity, a fact that Frances demonstrates by covering the window over her bed with yellow paint, thus providing her with the proper mood lighting for a bright night’s sleep. Only by shifting our perspectives can any of us ever begin to “get somewhere” outside of ourselves, and cinema can provide us with that first meaningful step. 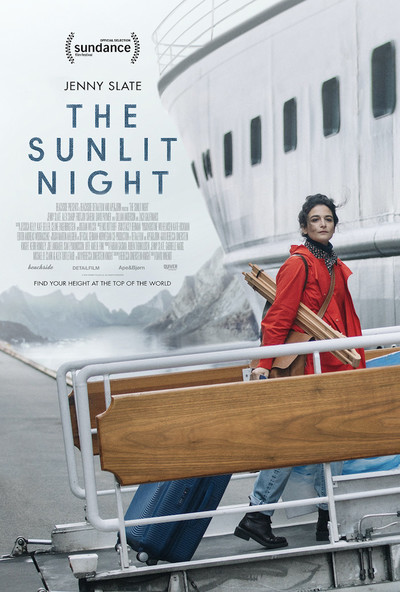