A helpful stranger used to call every month or so with helpful suggestions for this brilliant screenplay he thought we ought to write. He wanted us to go into a partnership; he'd think up the ideas, see, and all I had to do was write them down. He would draw from his vast experience in wholesaling, he said, which was an area people were fascinated by. I think he was calling from a bar.

Anyway, I haven't heard from him for a year or so, and I was beginning to get concerned. What had happened to all those brilliant ideas, and who was getting the opportunity to write them out for him? The answer, I think is that the guy finally unloaded the plot of "The Statue" and retired.

In addition to being one of the worst movies ever perpetrated, "The Statue" is based on one of the two or three worst ideas ever conceived for a movie. How it managed to get past the office mimeograph machine, much less get read, financed, produced, acted in and even released, is a mystery maybe only that helpful stranger, with his boundless optimism for bad plots, could explain.

Consider. David Niven is the inventor of a marvelous new international language that will help us all communicate, tear down national boundaries, bring peace to the world, etc. He wins the Nobel Prize, but he's only home 18 days in three years. His wife, Virna Lisi, undisputed queen of bad movies, is a sculptress who does a statue of Niven, about 20 feet high. Now here's the gag. Are you ready? Because he's not home enough, she's hired a model for the private parts.

Niven (a) doesn't want himself standing nude and 20 feet tall in the middle of London, but (b) especially not with someone else's privates. Nelson's column is going far enough. Trafalgar or no Trafalgar. So he sets out to discover the anonymous model and wreak vengeance, or something, upon him. And then ... I walked out.

I suppose a funny movie might have been made of this material. No, on second thought, I suppose not. Certainly not with David Niven looking so uncomfortable you wish, for his sake, he were in another movie, or even unemployed. Anywhere except under those pigeons. 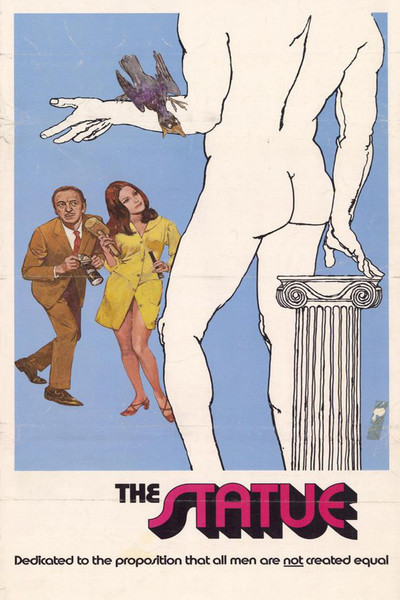 Virna Lisi as His Wife