You know what would make the Nativity story so much better? Wise-cracking animated animals that save the day—or so the creative team behind this holiday-themed family flick thinks. The critters apparently have waited far too long to be hailed for their participation on that special night. That appears to be the motivating factor behind “The Star,” a retelling of the first Christmas directed by Timothy Reckart in a feature debut that might have its heart in the right place but can’t quite manage to smoothly blend the spiritual with the silly without a few Biblical hitches here and there.

The most awkward scene arrives early, introduced by the words “Nazareth 9 months B.C.” That at least made me smile. But then a young girl is visited by a glowing angelic-like presence that proceeds to announce that God has chosen her to bear his Son. Shock, awe, fainting—any and all would be an acceptable response. Instead, she calmly takes in this news flash as if she was given a weather update and basically says thanks. I wanted to say, “Honey, this isn’t like being told that you won a free dinner for two at Olive Garden. This is THE Annunciation. Act accordingly.”

Granted, this Mary doesn’t have much of a back story, though she has freckles and rivulets of raven hair. She seems nice, but the script gives little hint why she is so special. Most amusing is that she is voiced by Gina Rodriguez, who plays “Jane the Virgin” on TV. Nothing like inside-joke casting. But, in short order, she is about to be wed to Joseph (Zachary Levi, “Tangled”). That leads to another uncomfortable conundrum when Mary tells her intended that, um, she is having God’s baby and he, lucky fellow, is going to help raise him—or, rather, Him. The humble carpenter is understandably verklempt at first, yet remains devoted to his wife.

The film is rated PG for “thematic elements,” which translates into pre-wedlock baby bump. You can practically hear a collective sigh of relief when this part of the story is over. Besides, the couple, obviously a big deal in the source material, isn’t the star of “The Star.” They take a backseat to a brash little donkey (Steven Yeun of “The Walking Dead”) who has escaped from his grueling job at a mill that required him to be chained to a grindstone. He and bird buddy Dave the dove (Keegan Michael Key, blessed with the best jokes) find a safe haven with Mary and Joseph. The lady of the house takes a liking to the beast of burden and names him Bo. The animals and humans don’t actually talk to one another, Shrek and Donkey-style, and thank goodness for that.

Meanwhile, the three kings are spied riding atop camels on their way to see Herod (Christopher Plummer). Again, four-legged characters steal the spotlight. While one of the Magi is voiced by controversial televangelist Joel Osteen, the hump-bearing steeds are performed by the show-business holy trinity of Tyler Perry, Tracy Morgan and Oprah Winfrey. Perry is the bossy one, Morgan is the dumb one and Winfrey is the sensible one. The wise men unwisely alert Herod that a new king of the Jews is about to be born and he calls for a census in order to locate this rival ruler and destroy him. Around the time that Morgan’s dromedary resorts to a “the king of the shoes” gag is when I began to lose faith in this venture. Seconding that feeling is a hulking silent brute in an iron mask, looking like a rejected extra from “Mad Max: Fury Road,” who is sent to do the bloody deed.

Eventually a whole menagerie puts in an appearance. That includes the thug’s hench dogs (Ving Rhames and Gabriel Iglesias) and such stable mates as a horse (Kelly Clarkson), a cow (Patricia Heaton) and a goat (Anthony Anderson). There are obstacles, physical confrontations and narrow escapes but everyone knows how this story will end—with a Mariah Carey Christmas song, of course.

Let’s at least applaud the diversity of the cast, although the fact we only hear them dilutes some of that impact. Affirm Films, a faith-based branch of Sony, has plenty of experience mixing religion and Hollywood before with such releases as “Soul Surfer,” “When the Game Stands Tall” and “Risen.” But it’s telling that the makers of “The Star” felt the need to include a disclaimer during the end credits acknowledging the liberties they took with this cornerstone of Christian belief and assuring they meant no harm. This outing is a bit toon-deaf in how it tries having it both ways by mixing the holy with high jinks. There was mild applause following the packed public screening I attended. But kids in the crowd seemed be more interested in their concession-stand snacks during the early portions. When it comes to delivering animated tidings of seasonal joy, give me the more subtle and better-told messages found in the holiday perennials “A Charlie Brown Christmas” and “How the Grinch Stole Christmas” instead. 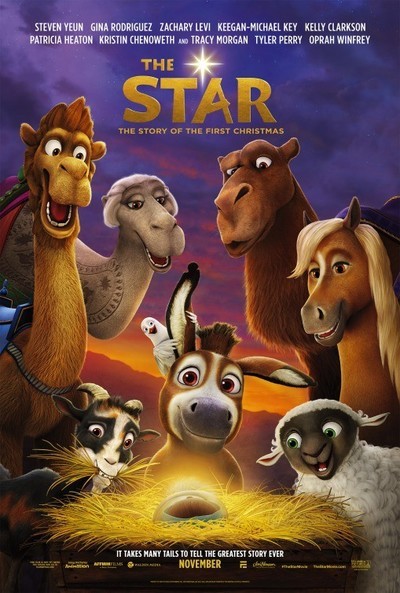