"Risen," about a Roman soldier searching for the resurrected Christ in the 40 days following the crucifixion, is an old-fashioned Biblical spectacular with fresh blood in its veins.  As directed by Kevin Reynolds ("Waterworld," "Fandango") and co-written by Reynolds and Paul Aiello, you could program it in a triple feature with "The Robe" and "King of Kings." It has battle sequences, CinemaScope images of scrub-dotted plains and hills, a swelling orchestral score by Roque Baños that sometimes evokes the late, great John Barry ("Out of Africa"), white English actors playing Romans, and actors of various nationalities and darker complexions playing Hebrews. The strategy works well until the second half, which resorts to pictorial cliches you associate with kitschy religious art and lets its story devolve into a series of clunky set-pieces.

Joseph Fiennes' Clavius is one of those stalwart leading man types, a morally neutral professional who has a spiritual awakening while doing a dirty job. After overseeing the deaths of several Hebrew prisoners, including the revolutionary Yeshua (Jesus of Nazareth), he finds himself assigned by Pontius Pilate (Peter Firth) to guard the cave where the supposed messiah's remains are being stored. The two exhausted soldiers he assigns to the task get drunk and fall asleep, and the next morning the remains are gone. This is a PR nightmare for the Romans. Throughout the land there's talk of a miraculous return, and although Pilate and his underlings seem properly spooked by the prospect, at first they treat it mainly as a management problem: the emperor is set to visit soon, and when he arrives the territory needs to be firmly under Roman control, not battling insurgents energized by news that Yeshua is still out there.

And so Clavius has to act like a detective, questioning people who knew Yeshua or were in His presence during His final days, in hopes of figuring out what happened to the body. It couldn't be an instance of the Son of God coming back from the dead, after all, because that would be a miracle! During his travels, Clavius hears one witness after another describe Yeshua—who is, of course, played by Cliff Curtis, modern American cinema's all-purpose ethnic—as a benevolent prophet with supernatural powers. And he starts to wonder if he's on the wrong side.

Fiennes' performance sells the transformation. With his attentive stare and subtle reactions—by turns mortified, judgmental and cynically exhausted—he makes Clavius seem more attentive and skeptical than his countrymen. When the tale begins, the character already seems aware that Roman dominance of the region can't be sustained. All this business with the messiah and the cave jump-starts a spiritual crisis that builds within him. Fiennes' expressions are just right. We see the character being rattled by other peoples' astonishment and gradually deciding to give in and join it.

You know where this story has to end up, but to its credit, "Risen" takes a slightly unconventional route to get there. Reynolds and Aiello's script keeps much of the first half's action earthbound, letting other characters describe miracles rather than trying to visualize them for us, and bringing the land and culture to life in blunt ways.

The direction frames simple gestures that would be tossed-off in other Bible pictures, such as tearing a loaf of bread or sipping a jug of wine, in loving close-ups, amplifying the ritual aspect and reminding us that every bit of food and drink is important. Life is cheap here. The most persistent sound is the buzzing of flies over putrefying corpses. When Clavius must decide during the mass crucifixion whether to direct a soldier to break a prisoner's legs or pierce his torso with a spear, he's as coldly analytical as a golfer deciding which club to use. The film's opening battle, which sees Clavius leading infantrymen against a band of Hebrew guerrilla fighters, pays careful attention to tactics. At one point, Clavius' men take the Hebrews' high ground away from them by sending infantry to the rock shelf where the enemy has gathered and having them crouch down and place their shields on their backs in a mosaic pattern, like over-sized floor tiles, so that their fellow soldiers can use them as a living ramp.

Although the filmmaking in "Risen" isn't at the same high level as that of "The Gospel According to St. Matthew," "The Last Temptation of Christ" and "The Passion of the Christ," it's on the same creative wavelength. We're not hearing a genteel sermon delivered from the pulpit of in an air-conditioned megachurch, but the harsher phrasing of a street preacher. You get a sense of Roman-dominated Jerusalem as an actual place, an occupied territory that could slip from the master's grasp if two or three things go wrong for them. Rome's eventual doom is foretold the instant that Pilate dismisses the Hebrew faith with a condescending sentence fragment: "'No other gods,' and so on." Although the film is mostly solemn, there are welcome flashes of humor. When Clavius asks a barracks full of soldiers if anybody knows Mary Magdalene (Maria Botto), every other hand shoots up.

Of course, Yeshua does return (after 2000+ years, there's no need for a spoiler alert) and spends quality time with His disciples, but they never know when He'll show up or when He'll leave, so they just have to accept it this as the price of being in His presence. "Is he coming back?" Clavius asks a disciple. "How would I know?" the man replies. Curtis can't quite get a handle on the character, which tends to happen when actors are asked to give life to holy abstractions. He beams like a contented surfer, his kinky locks half-obscuring his brown eyes, and hugs people, and strolls along the shore yelling instructions to disciples in a boat.

There's so much thoughtful acting, directing and writing in "Risen" that it's a shame the film doesn't seem to know what to do with itself. Yeshua's farewell appearance is a bunch of mass-market religious art cliches, with the film's only terrible CGI, and the story seems to just sort of stop rather than end, as if it ran out of things to say. It keeps threatening to be miraculous and never gets there. But there's some rough magic in it. 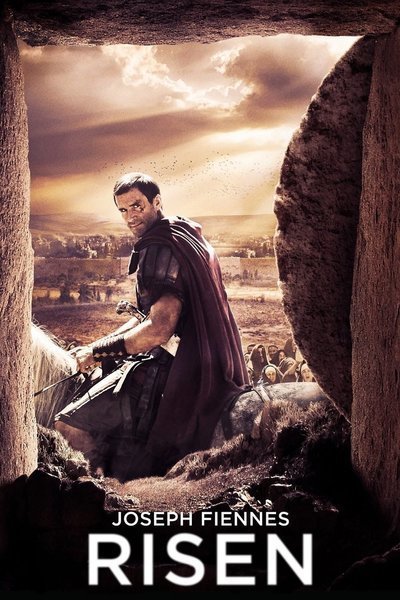 Rated PG-13 for Biblical violence including some disturbing images.