The Standoff at Sparrow Creek

The first excellent film of 2019 is playing in limited release and on VOD right now in Henry Dunham’s thrilling debut “The Standoff at Sparrow Creek,” a film that really reminded me of ‘80s and ’90s David Mamet in how it puts a bunch of alpha males in a room and then allows them to bounce off of each other. Dunham displays a remarkable skill when it comes to using limited space, trapping his characters in a warehouse on a life-changing night and watching the insecurities that they have shrouded in macho masculinity come bubbling to the surface. It’s the kind of movie that will make “Underrated” lists in ten months. Don’t wait that long. See it now.

James Badge Dale does arguably the best work of his already-solid career as Gannon, an ex-cop who has felt so betrayed that he’s joined a militia group in Michigan. The militia movement gained national attention after the Oklahoma City bombing, but it certainly hasn’t gone away in the two decades since. There are bunkers right now, across this country, filled with weapons, waiting for the day that the government breaks down (well, more than it already has). And most of these bunkers are occupied by men who feel like the system has let them down, and they’re just waiting for judgment day.

For this one group, that day may be today. There was a funeral of a police officer this evening, and someone walked out of the woods at the cemetery and opened fire with an AR-15. Naturally, this headline-grabbing news forces the leaders of this small group to the warehouse, where they discover that one of their AR-15s is missing. Everyone who had access to that weapon is in the warehouse right now, and so one of them is a cop killer. No one is willing to confess. Given that he’s the ex-cop in the group, Gannon leads the internal investigation, questioning his fellow militia members, allowing their paranoia, fear, and anger to boil over the surface. It’s kind of like “The Thing” or an old-fashioned Agatha Christie mystery in which we know one person we’re looking at is a liar. Actually, maybe they all are.

Dale drives the narrative—and does an excellent job doing so—but this is also a great ensemble piece for character actors, including the always-welcome Chris Mulkey and Patrick Fischler. Dunham proves to have a deft hand with ensemble, never allowing any of them to steal focus from the other. And he’s an even better writer, walking an incredible tonal tightrope when it comes to incendiary subject matter. He neither turns these angry men into caricatures of anti-government lunatics nor humanizes them too much so that their questionable politics, motives, and beliefs feel like they’re being endorsed. These are violent, selfish men, but Dunham’s script and the careful performances make the roots of those feelings resonate. They feel betrayed by a system that they’re convinced will someday betray us all. There’s some logic to that, even if it leads to illogical, non-empathetic behavior.

What makes “The Standoff at Sparrow Creek” special is how much it reminds you of stories of alpha males like “Reservoir Dogs,” “The Thing,” and Mamet’s work without ever feeling wholly derivative. It’s not merely a carbon copy of something you’ve seen before, but a modern twist on the classic tale of fractured and failed masculinity that’s also just wickedly entertaining instead of being didactic. It comes from a long legacy of stories of men whose pride and ego helped destroy them. And it stands tall within that subgenre.

A shorter version of this review appeared in our TIFF coverage last year. 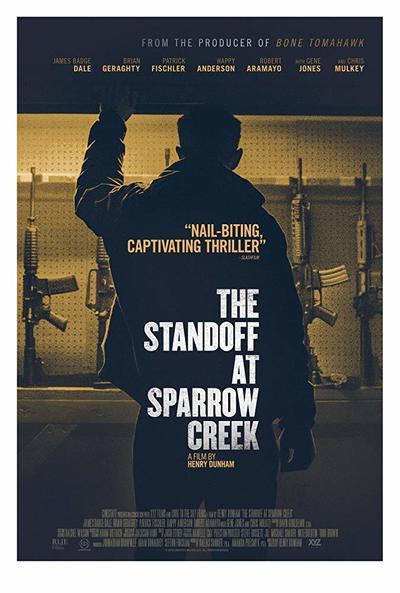