Borat is dead, never to return—he's been killed by the type of exposure Sacha Baron Cohen receives each time he goes public with one of his outrageous interviewees. Now, for his latest trick, Cohen echoes the commitment and danger within his acting style by presenting the real-life story of Israeli Mossad agent Eli Cohen, who went deep undercover in Syria from 1960-'65, eventually befriending that country’s president. It's not exactly like when Cohen pretended to be a Mossad agent named Erran Morad on the recent Showtime series "Who Is America?", in order to get to Dick Cheney to sign his waterboarding kit, but it's not too far off. Executive produced by Cohen and directed by Gideon Raff ("The Red Sea Diving Resort") “The Spy” is a compelling albeit uneven limited series that offers a unique character study of a spy, and in this case, a true chameleon.

Across six episodes, the series details through some bizarre twists how Eli went from a diligent department store employee in Israel to a spy embedded in Syria, pretending to be a confident business man named Kamel Amin-Thabaath. A twice-rejected applicant to Mossad, Eli is brought on by his future handler Dan Peleg (Noah Emmerich), and assigned to make connections with major people in Syria, to find out what they’re planning to unleash on Israel. Eli jumps at the chance, even though it means lying to his wife Nadia (Hadar Ratzon Rotem) about where he is, and what he’s doing.

Raff has a “Pleasantville”-like approach with his color palette, only bestowing his images with full color once Eli is deep in his mission at episode three, and for the most part it feels tightly plotted. Sometimes, it’s rushed to a fault, like a cheesy training montage that shows how Eli gets into physical and mental shape over the course of a few months, or with a key detail that’s just not hammered in enough—Eli’s devotion to country, which becomes his motivation to be gone for so many years. But by the end of episode one, “The Spy” takes off as Eli transforms into Kamel while delivering a monologue to the camera—Kamel’s life story—and the series casts a spell, showing a chameleonic actor playing a chameleonic character.

Eli's journey takes him to Buenos Aires, where he befriends Syrians like Colonel Amin Al-Hafez (Waleed Zuaiter), who is rising in the country’s ever-tumultuous political state. Of course, the colonel is skeptical about a man who falls into his life with a smile and a joke, but once Eli is able to smoothly prove that he is for real—down to naming the grave plot of his fake parents—he gets access to the colonel, and his friends. Later on, it's people like incredibly wealthy Sheik Majid Al Ard (Uri Gavriel) who Eli tries to tactfully woo, leading him closer to a mysterious operation at the center of Damascus.

Eli is very much fashioned as an actor spy: Cohen never wields a gun, and only sporadically is shown snooping around. This is much more about something that’s innate within Sacha Baron Cohen’s work, of being able to read people in order to gain intel. Within the series’ compelling and grounded games of wit, Cohen makes it believable that he could blend in with these different crowds, despite likely being the tallest person in the room, and keeps the story grounded with the threat of Eli making a grave misjudgment. The most irresistible tension from the series, with big action scenes never missed, is in seeing Eli possibly get in over his head while interacting with people who could easily cut him off and in turn, kill the mission.

But while Cohen is thrilling to watch as either Eli and Kamel, there’s a difference between impersonating and full dramatic acting, and “The Spy” too readily exemplifies it. Cohen can vividly present the the lives of Eli or Kamel, but he can’t capture the the nuance in someone who is stuck being both. Subtlety has never been something associated with Cohen’s showmanship, and that changes little here despite, and because of, the series’ grandiose dramatic aspirations. It’s Cohen’s little forlorn glances and quiet beats—meant to depict Eli breaking character—that can break the spell of “The Spy,” which is strongest when Cohen is exploring one character or the other.

Raff’s series emphasizes the isolation of espionage by spending time with Nadia, alone and pregnant, her husband no longer leaving surprise love notes in her apartment as he once did. It's a strong performance from Rotem, and creates a less lethal set of stakes, especially as Dan starts to get close to her, as if to offer some condolence for the dangerous mission he’s sent her husband on. But the cheesy side of “The Spy” takes over with these ruminations, like when Eli and Nadia are depicted in a split-screen segment, both sitting in a kitchen, eating a snack, staring off and undoubtedly thinking about the other.

In a larger scale, “The Spy” knows how to create a growing sense in sadness, but not in how to deliver on it. Instead, the most important expressions are cheap, like whenever someone gets a chance to trash their surroundings to show their bubbling emotions. “The Spy” is hollowed out instead of enriched by its moments showing the human factor of Eli’s work, and it practically collapses in the last twenty minutes under its utter seriousness—the last episode is one of the most anti-climactic in recent memory, despite how Raff’s editing has been building to it from the first scene in episode one.

“The Spy” casually contributes something significant to the spy genre—a strong sense of shadowy workers who just want to do their job so they can go home. It’s a powerful sentiment, and gives the espionage universal stakes, while making Cohen an irresistibly meta part of the project. "The Spy" is another high-wire act from the nonpareil screen presence, albeit a shakier one that often lives and dies on the actor’s very particular set of skills. 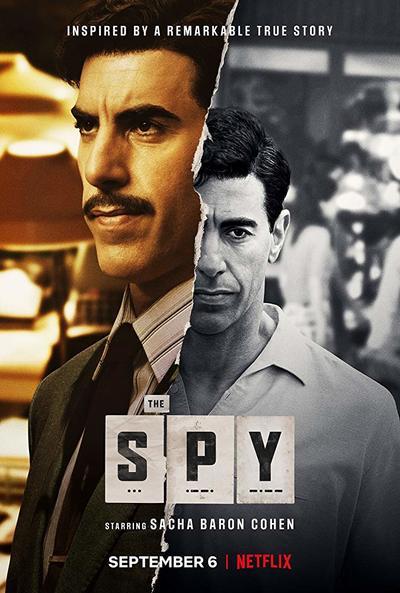