Hollywood has a long history of turning heroic true stories into cinematic thrillers. The best of them take harrowing stories of danger and make them resonant to audiences sitting comfortably in theaters or, increasingly, on their couches. They take us there through time and geography, and often ask us what we would do in the same situation, whether we would rise to the occasion and be heroes ourselves. And the really great ones offer something that a non-fiction book cannot, grounding true stories in high drama with three-dimensional characters who feel real. They remind us of the humanity embedded in heroism. Gideon Raff’s “The Red Sea Diving Resort,” unceremoniously dumped on Netflix today, does none of these things. It turns real heroes into generic tropes and real victims into manipulative props. Great hero stories leave the viewer feeling inspired by the potential within the human condition. This one will just leave you depressed.

“The Red Sea Diving Resort” tells the true story of a group of Mossad agents in the early ‘80s who rescued hundreds of Jewish-Ethiopian refugees though Sudan and then back to Israel. The tone of the film is set by its opening scene, in which we watch Ethiopians fleeing gun-toting villains to nearby trucks. Of course, a child is missing. He must be in the field playing airplane. The only person who can save him is the heroic Ari Levinson (Chris Evans), who gets to the boy seconds before automatic gunfire nearly tears him apart. Child in jeopardy, check. White savior, check. Near-tragedy turned into action scene, check.

Ari and his team are captured, and forced to return to Israel, but our hero can’t sleep knowing that there are Jewish-Ethiopians who need his help, including friend Kebede Bimro (a miserably wasted Michael K. Williams, who disappears for half the movie and is given nothing to work with beyond his dedication when he returns). And so he devises a plan. The Israeli government will purchase an abandoned fishing resort on the coast of the Sudan – the one that gives the film its title – and his team will use it to free those still stuck in Ethiopia. The team includes the always-reticent Sammy Navon (Alessandro Nivola), tough Rachel Reiter (Haley Bennett), Jake Wolf (Michiel Huisman), and Max Rose (Alex Hassell). Greg Kinnear and Ben Kingsley show up as suits who can’t believe how daring and reckless Ari is behaving – at one point, he is literally described out loud as “reckless and out of control.” The team actually ends up running the resort as a business after they realize it makes for a better cover if it looks like they have a reason to be there.

That last detail, while possibly historically accurate, leads to one of the most jarring tonal shifts in any film in years. After they decide to keep the resort open, Raff stages a wacky hotel business montage set to Duran Duran’s “Hungry Like the Wolf,” complete with ‘80s-style editing and Nivola noodling the song on an acoustic guitar. He follows that up immediately with a scene of the film’s villain, Col. Abdel Ahmed (Chris Chalk, who actually gives the best performance, exuding some serious menace), interrogating refugees about how their numbers are dwindling by shooting several of them in the head, execution-style. To say it’s abrupt, would be kind. It’s truly jaw-dropping.

At least that drastic tonal jump is worth remembering, as awful as it is, because most of “Red Sea Diving Resort” is just dispiritingly forgettable. It’s the kind of script that underlines and highlights every character trait and motivation – the dialogue about leaving no one behind would sound hackneyed and forced on a TV movie in the ‘80s much less in what should be a theatrical one 40 years later. These characters are always either talking about how dangerous the mission is, how important the mission is, or the incredible things they accomplished during the mission. These are heroes, and don’t you forget it. But they’re never real people.

Of course, no one would dare to suggest that what the Mossad agents who actually saved lives through the Red Sea Diving Resort accomplished wasn’t more heroic than anything I’ll do in my life, but that fact doesn’t make the movie about them work. It feels like everyone involved in “The Red Sea Diving Resort” presumed the tale itself was so moving that they didn’t need to do much to make it into an inspirational movie. It’s a story that most viewers won’t know before they watch the film. And won’t really feel like they know after, either. 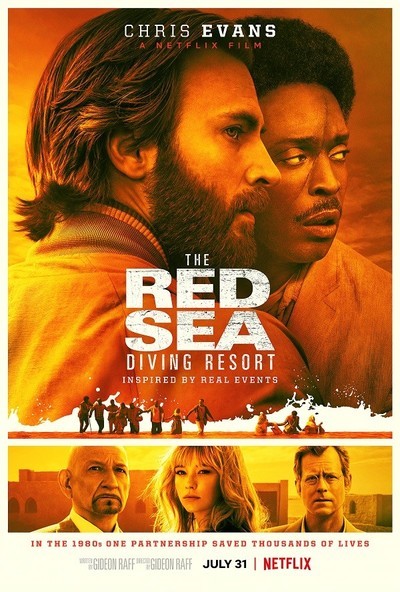