The Space Between Us

While the idea of moving to Mars might not sound so terrible right about now, “The Space Between Us” is about a young man who’s spent all of his 16 years on the red planet and can’t wait to visit Earth—specifically, to meet the cute high school girl with whom he’s sparked an online flirtation. Trouble is, he may not physically be able to withstand the journey—or last long once he gets here.

It’s kind of an intriguing premise, even if it plays a bit like a “Muppet Babies” version of “Starman,” with an appealing lead performance from wide-eyed Brit Asa Butterfield. But the sci-fi/mystery element of the film works far better than the romance between Butterfield and an annoyingly feisty Britt Robertson as his interplanetary pen pal, and the whole thing ultimately collapses in a heap of unintentionally hilarious melodrama.

Veterans like Gary Oldman and Carla Gugino bring flashes of dignity and sometimes even emotional truth to this frequently silly enterprise. But—like Will Smith, Kate Winslet, Helen Mirren and Naomie Harris surely found while making “Collateral Beauty”—there’s only so much you can do with a soggy Allan Loeb script. The twists are just unbearably ridiculous, which drains all the power out of their supposed catharsis.

Then again, awkward tonal shifts abound in the film from director Peter Chelsom, known for such early-2000s misfires including “Town & Country,” “Serendipity” and the English-language remake of “Shall We Dance?” Chelsom, who also provides the voice of the boy’s wisecracking robot pal early on, can’t quite make the transition from a character receiving terrible news to a joyous hot air balloon festival, for example. And a scene in which Robertson’s fiercely independent foster-child character starts playing the piano and singing a ballad in the middle of a Sam’s Club shopping spree is more likely to prompt giggles than the poignancy for which it clearly aims.

There’s reason for hope at the outset, though, simply through the involvement of Oldman. He plays a Richard Branson-type billionaire explorer named Nathaniel Shepherd who’s funding a mission to set up a colony on Mars called East Texas. (There’s the glimmer of a notion that climate change is a motivating factor, but any sort of political underpinning quickly gets swept aside.) But it turns out that the lead astronaut (Janet Montgomery) was pregnant when she boarded the rocket; several months later, she dies during childbirth. (Not a spoiler, folks—it happens early in the movie.) The ethical questions at stake are intriguing: whether Nathaniel and his team should report to the world that a boy has been born on Mars, or keep it a secret to avoid jeopardizing the mission. But that’s about the extent of the intellectual ambitions at play here.

16 years later, the colony is thriving and the baby has grown into an inquisitive, slightly awkward young man named Gardner Elliot. Gugino plays the intelligent, supportive astronaut who was sent to East Texas to function as a mother figure to him. But Gardner’s daily chats with Robertson’s character—a similarly frustrated, isolated teen who goes by the nickname Tulsa—make him increasingly curious about Earth. He also hopes to learn the identity of his father, whom he’s seen in photos and snippets of home movies.

Despite the physical toll it likely will take on him, Gardner makes the trek to Earth, where he promptly escapes his government handlers and seeks out Tulsa (who lives in Colorado). Fish-out-of-water antics involving exotic phenomena like rain aim for easy, obvious laughs, but they’re vaguely amusing because of Butterfield’s pleasingly guileless persona. The two go on a road trip across the American West, stealing various cars and stopping in Las Vegas on the way to California, trying to outrun the authorities and his mounting health problems along the way.

Which brings us to the multitude of distracting, inconsistent details. It’s supposed to be 16 years in the future, right? Some elements (like laptops) have a high-tech look about them, while others (like dry erase boards in a classroom and old pickup trucks and cars) are clearly from the present day or even a few decades ago. They make a big deal out of the fact that the beach house that’s their ultimate destination is in the tiny beach town of Summerland, Calif.—a few miles down the coast from Santa Barbara—but then the authorities that arrive are from Los Angeles. Stuff like this sticks out when you’re not engaged emotionally in what is supposed to be the film’s dramatic climax.

Butterfield and Robertson (who’s about 10 years too old to be playing a high-school student at this point) don’t exactly get sparkling dialogue with which to convince us of their burgeoning love. Neither does the score, which works overtime to make us feel all the feels.

But hey, at least there’s an exploding barn. That’s something you don’t see on Mars every day. 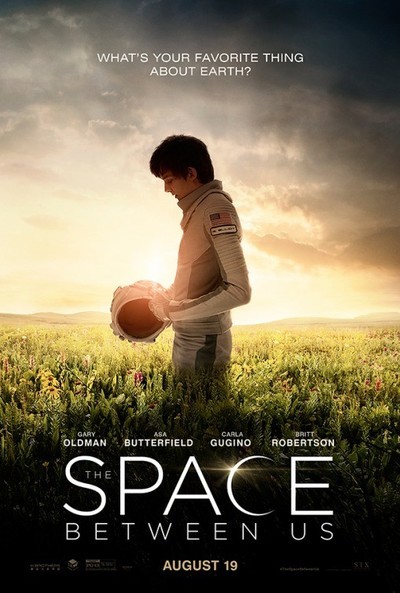