The more we learn about the insidiousness that underlies social media in the new documentary "The Social Dilemma," the more it seems like the film is bringing a sling shot to a nuclear war. What we learn in this movie is that our brains are being manipulated and even rewired by algorithms that are designed to get our attention and make us buy things, including buying into distorted ideas about the world, ourselves, and each other.

"The Social Dilemma" is from Jeff Orlowski, who gave us the similarly terrifying "what are we doing to ourselves" documentaries "Chasing Coral" and "Chasing Ice." This one might as well be called "Chasing Us" as it asks fundamental and existential questions about whether we are literally writing (with code) ourselves out of the ability to make vital decisions about our own survival.

There have been other documentaries raising concerns about the impact of social media on our privacy and our morale and even our democracy, including the very good-to-excellent "Screened Out," "Lo and Behold: Reveries of the Connected World," and "The Great Hack." But this documentary has a significant advantage. While all of the films have impressive experts to explain how we got here and why here is not a place anyone should be, in this movie many of the experts are the same people who got us here—top executives from Twitter, Instagram, Pinterest, Facebook, and other sites that seduce us into spending time and sharing information so they can sell both. As the film opens, we can see that the people who will be telling us their stories are uncomfortable and embarrassed. It turns out, they will be confessing and apologizing.

For example, there is Justin Rosenstein, the inventor of Facebook's most ubiquitous feature, the "like" button. He sheepishly says it was intended to "spread positivity." What could be wrong with letting your friends and their friends "like" something you've posted? Well, it turns out people get their feelings hurt if they don't get likes. So, they amend their behavior to attract more likes. Does that seem like a problem? Consider this: a large population of the people urgently trying to get "likes" are young teenagers. We all know the excruciating nightmare that is middle school, when all of a sudden you no longer take for granted what your parents tell you and decide that what you really need is to be considered cool or at least not a total loser by your friends at school. Now multiply that by the big, unregulated world of the internet. This is why there is a precipitous spike in anxiety, depression, self-harm, and suicide attempts by the girls of Gen Z, current middle and high schoolers, as much as triple in some categories. Then there's the new clinical term "Snapchat Dysmorphia," describing the people who seek plastic surgery to look more like the filtered images they see online.

The experts assure us their intentions were good, even the one whose job title at Facebook was head of "monetization." Another one confesses that he worked on making his site irresistibly seductive at work all day and then found himself unable to resist the very algorithmic tricks he helped to create when he went home at night.

The film's biggest mistake is a poorly-conceived dramatic re-enactment of some of the perils of social media. Even the wonderfully talented Skyler Gisondo cannot make a sequence work where he plays a teenager seduced by extremist disinformation, and the scenes with Vincent Kartheiser embodying the formulas that fight our efforts to pay attention to anything outside of the online world are just silly. The excellent feature films "Disconnect" and "Trust" have illustrated these issues far better.

We may question whether audiences are able to absorb any old media narrative requiring sustained attention without the "positive intermittent reinforcement" of a "like" button to click. Even in the world of "the attention economy" this film has some worthwhile suggestions, including taxing the "data assets" of social media companies, and be sure to stay through the credits for some clear, simple rules parents can adopt. The most important lesson from "The Social Dilemma" is that we should question everything we read online, especially if it is presented to us in a way that reflects a detailed understanding of our inclinations and preferences. And we should resist the "attention extraction model" that makes social media seem friendly and reinforcing. Now, you'll have to excuse me—I have to go delete Twitter from my phone. 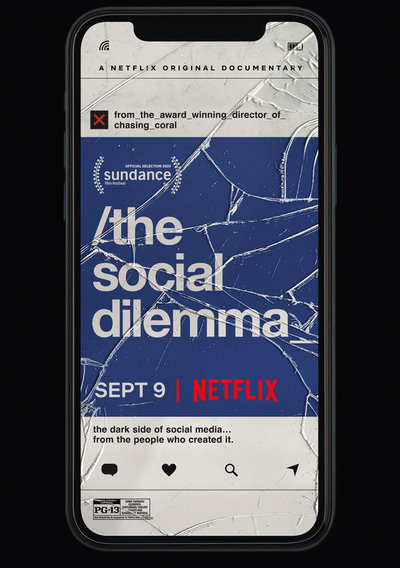 Tristan Harris as Self