Even when the dramatic stakes are raised to the point of pounding music accompanying super-slow motion, potentially tragic violence, "Disconnect" struck a chord with me in a way few films have in recent years.

You should see this movie. Please.

We get three distinct story lines, with some overlap between two of the main threads.

Cindy (Paula Patton) and Derek (Alexander Skarsgard) are as handsome a couple as you'll ever see, but they're in mourning over the loss of their baby, and their already troubled marriage is further tested when their identities are stolen on the Internet — most likely because Cindy spends most of her day online, in particular chatting with a man who claims to be a widower and seems interested in meeting her in person.

Jason (Colin Ford) and Frye (Aviad Bernstein) are a couple of smart-ass skateboard punks who target freaky music nerd Ben (Jonah Bobo) for an extended online prank in which they pose as a fictional girl with a Facebook crush on Ben.

Note that all of these conflicts and relationships are initiated through laptops, iPads and cell phones. People fall in love, exploit one another, reveal their deepest secrets and even commit felonious acts — all before there's a single face-to-face meeting. That's hardly a dramatic leap, given that in the real world, an All-American football player and a nationwide media were convinced the football player had a loving, caring girlfriend who died from cancer — a girlfriend he'd never actually met in person, because it turns out she didn't exist.

We're supposedly more cynical and more sophisticated, and we're certainly more technologically savvy (at an increasingly younger age) than any generation in history — yet we're still so gullible and naive we're actually surprised to learn social media sites are monitoring every link we click, every "Like" we like, every product we Instagram. Working from a powerful, authentic-sounding and moving script by Andrew Stern, director Henry Alex Rubin does a masterful job of laying out the case in each story so we can understand how all these smart people can make such dumb decisions and act in such a reckless manner while pecking away at keyboards of various sizes.

Everywhere we turn in this film, there is strong acting. Riseborough is brilliant as the local TV reporter whose ambition far exceeds her skill set and her ethics. Thieriot's Kyle is a strutting peacock and aggressively obnoxious, but we know it's bravado masking his immense insecurity.

Jason Bateman gives one of the best dramatic performances of his career as a the high-octane attorney who's tethered to his BlackBerry and waves off his wife's concerns about their nearly mute son. All of the younger actors turn in fine work, most notably Colin Ford as Jason, the online bully who begins to feel remorse about torturing the class weirdo — but not enough remorse, and not soon enough. Frank Grillo delivers award-worthy work as Jason's father, a former cop now working as a private detective specializing in Internet crimes. (He's more sympathetic to his clients Derek and Cindy than he is to his son.)

We can see where one of these stories is going well in advance of developments. The other two plot lines aren't as predictable, but don't carry quite the emotional punch. But even when "Disconnect" follows the path we expect it to follow, it does so in a way that keeps us intensely engaged.

There wasn't a moment during this movie when I thought about anything other than this movie. 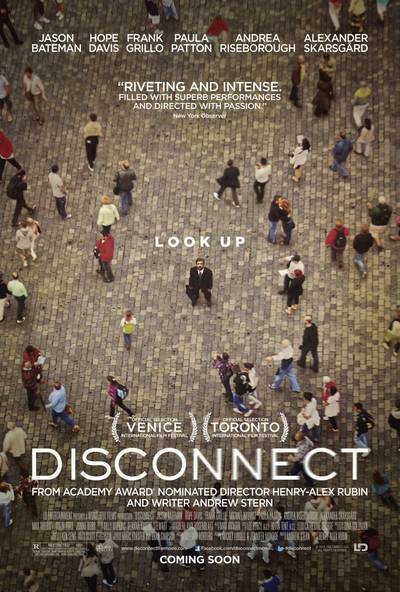