There’s a moment in the Netflix documentary “The Great Hack” where someone brings up controversial social experiments like Dr. Philip Zimbardo’s Stanford Prison Experiment. These were psychological projects meant to test the limits of human nature, empathy and good old fashioned common sense. They measured how far the deck needed to be stacked before the observed subjects voluntarily went along with an authority they knew better than to follow. Sometimes the results unearthed a dormant evil in a person, but more often than not, when participants were interviewed, they revealed a desire to be rewarded for following instructions and a fear of being ostracized if they had not.

Directors Karim Amer and Jehane Noujaim keep this revelation running under the surface of their film. Their narrator is David Carroll, a media professor whose international lawsuit serves as the jumping off point. “The Great Hack” blends in details about how the many strides in computer technology and data analysis now allow a massive, global expansion of a new type of social experiment, one that involves reshaping the world in a particular image. Here, social media becomes the new Petri dish, enticing users with hot trends and ideas that demanded immediate consumption and acceptance lest the user risk being left behind. Facebook and Twitter have so easily exploited this notion in the culture that the term “fear of missing out” was coined to describe it. It was only a matter of time before someone applied this to politics and elections.

“The Great Hack” concerns itself with the United States Presidential election of 2016 and, to a lesser extent, the Brexit vote and other international political campaigns. The common factor in all these events is a now-defunct firm called Cambridge Analytica, represented throughout the film by several former employees. At the height of its powers, the company held up to 5,000 data points about each of the people contained in its databases. This information was used for a variety of purposes meant to manipulate a certain cross-section of people. The master manipulators didn’t go after people whose minds had been made up; they went after on-the-fence folks referred to as “the persuadables.” Using the collected data, Cambridge Analytica set out to create fear and/or apathy to achieve the results of the political parties that hired them. Carroll’s lawsuit is an attempt to retrieve the data collected on him.

And how did the thousands of points of data wind up in those databases? Well, you willingly gave it to them, dear readers. Remember those seemingly innocent Facebook quizzes that you took to determine what Disney villain you were, or whether you were an introvert or any other goofy question you couldn’t wait to have answered so you could share it with friends online? Those little diversions asked specific questions that were used to harvest data. Based on this and other information gleaned from Facebook posts and the friends with whom you associated on that platform, the data analysis tools used artificial intelligence and evaluations to create a startlingly accurate profile of you. Carroll asks his class if they ever think their phone is listening in on them because the ads they see seem perfectly tailored for them. Everyone says yes. Carroll tells them that this manufactured profile is why.

Providing a look into the inner workings of Cambridge Analytica are Christopher Wylie, a programmer and data analyst who worked on numerous algorithms and Brittany Kaiser, one of the brightest stars at the company. A former intern for the Obama campaign, Kaiser comes up with the idea to handle the GOP side of the 2016 election. Someone tells us that Cambridge chose the Republican side of the equation because, unlike the Democrats, they won’t verify anything they’re told online. While Kaiser provides some very interesting information, the film doesn’t really hold her accountable. It sees her as a whistleblower, but it never interrogates that she’s also blowing the whistle on herself. This is one of the bigger flaws in “The Great Hack.”

The film’s biggest strength, however, is its ability to lay out a timeline for the events that would eventually doom Cambridge Analytica, from the time it’s discovered that it has been collecting data to the moment its CEO Alexander Nix pleads guilty the criminal charge filed by the United Kingdom Information Commissioner regarding Carroll’s lawsuit. Assisting us is reporter Carole Cadwalladr, who wrote a series of articles for The Guardian. Cadwalladr is the most charismatic figure in “The Great Hack” and her explanations are clear and concise. Sometimes, she’s as surprised as we are about the testimony we see. Some of that testimony includes Kaiser and other members of Cambridge in London and Mark Zuckerberg’s appearance before Congress.

This is sure to be a controversial documentary, not just because it sees Brexit and the GOP Presidential campaign involvement with Cambridge Analytica as a sinister, almost military-grade level of psychological warfare against an unsuspecting public, but because it also highlights how large groups of people can easily be led to vote against their own interests. There’s a too-brief section focusing on the “Do So” campaign in Trinidad and Tobago, where social media was flooded with catchy graphics and slogans designed to foster apathy in folks who would vote for the side not allegedly in cahoots with Cambridge. The Do So campaign made it seem cool not to vote at all, so many young people did not. As with the American campaign, the bombardment of ads and demonizing and false news stories was relentless.

“The Great Hack” will be catnip for data wonks and mathematicians, but I sense its desired purpose is to be a cautionary tale for the general viewer. I think it’s a tad too long and a bit too wishy-washy when it should be angrier, but I was fascinated by it for a very specific personal reason. I have been a computer programmer for 32 years now, 17 of those years have involved some form of data analysis not unlike some of the things I saw in this film. Over time, I’ve learned how valuable data can be to a business or an entity like a retail chain. How that data can be used to determine what items are considered “impulse buys,” that is, the stuff you see near the register. Or how sales during happy hour can be useful to a beer company in terms of deciding when to show up at your local hangout to do in-person promotions. It’s all about how we’re so easily swayed toward a desired outcome.

I’m always yelling at people to read the damn software agreements before using an app to see what data they’re collecting from you and how much access they have. I’m always saying, “kick Alexa’s nosy ass out of the house. And Siri’s too.” I’ve gotten quite a rep as a computer-based Cassandra amongst my friends. And yet, I’m somewhat guilty just by virtue of being on Facebook and Twitter even if I avoid many of the pitfalls. At the end of “The Great Hack,” Carroll asks if he’s capable of being manipulated. It’s the wrong question. The right question is how willing are we to continue being manipulated, and can we at least profit in some fashion from all that data we’re handing over for free?

We’re told that tech companies are the richest businesses in the world, and since data is the hottest commodity on the market, they’ll do anything to get it. That we don’t know what’s being done with our data is the scariest aspect of all this. “The Great Hack” hammers that point home quite successfully, even if it doesn’t have the guts to chastise us for our voluntary contributions. 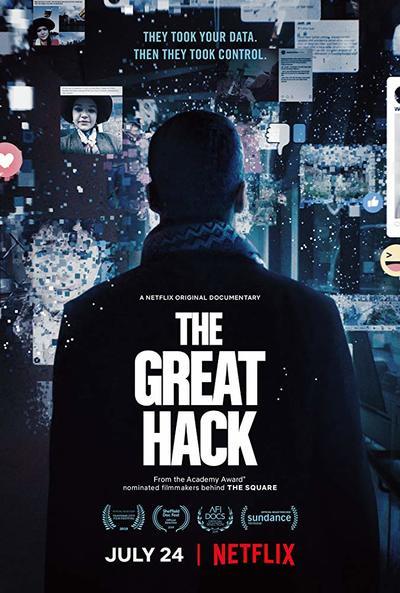 Mark Zuckerberg as Himself (archive footage)

Donald Trump as Himself (archive footage)