Who can resist a Mixmaster-full of myths taking off from a beloved Hans Christian Anderson tale, and updated with a progressive role model for girls? "The Snow Queen" is another of those can't-miss concepts that did anyway: The message gets muddled with plot strands going every which way, though the real culprit is some awkward animation.

A Russian production directed by Maxim Sveshnikov and Vlad Barbe, with animation from a Russian lab, the film is dubbed with a kind of Americanese. What's a troll with a sorta Bronx accent and Brooklyn attitude doing in a Danish fairy tale about two little kids who lost their parents to a vengeful Snow Queen?

This queen, voiced by Cindy Robinson, shows up mainly at the beginning and end of the film; she's chilling but not thrillingly threatening. It's Gerda's (Jessica Straus) story anyway. She is on a fraught journey, looking for her lost brother Kai (voiced by Marianne Miller) held in captivity by the Snow Queen. In what may be a metaphor for Russia and its suppression of creativity (check out the domed castles), the Snow Queen has destroyed the world with ice and a cold north wind from a vial. That world included the kids' glass-maker dad who created mirrors that can reveal your true self. Gerda and Kai miraculously escaped the destruction.

After some brief early scenes in a dreary place called "St. Peter's Kids Shelter" which forbids all laughter, Gerda shows her courage, honesty and loyalty. She never backs down from a fight. But she's a bit of a bore, a Ms. Goody Two Shoes of a junior feminist heroine. It's a perverse pleasure to be able to complain about a type women have been crying out for; in a way, when you can criticize "progress," it does show things are getting better for female movie characters. But Gerda just doesn't have the spunk or spirit of Merida, the Scottish fighter princess of "Brave."

She does have a sidekick, The Troll, voiced by Doug Erholtz, and another survivor with a brief backstory of his tribe's wipe-out. He provides some comic relief with the few good lines of the film, like complaining about discrimination against trolls. Too, the Troll's snow-boarding at least moves. Most of the animation is curiously static.

Perhaps trying to please the p.c. contingent, the filmmakers have rifled the Hans Christian Andersen tale, which actually has seven different narratives. They found some other female-centric bits, including roadside gypsies/highway robbers headed up by a matriarchal babe, and a wise old crone throwing runes. Even the Snow Queen declares she and Gerda might have been good friends under different circumstances.

A "Flower Woman" (Wendee Lee) looks deceptively inviting in her green world of hot house plants under glass. Bright green leaves and aggressive tendrils play off nicely against the white snow and ice, a rare visual treat in the film. Yet the impact of this sequence comes from other sources: Flower Woman is a "Hansel and Gretel" type witch with poison in her offered cups of tea; there are colored roses like Alice saw in her "Wonderland."

And the glittery, even glamorous power of Anderson's Northern queen, which inspired numerous films and even operas, doesn't stir us. Perhaps our worries about global warming and diminishing ice get in the way. Or maybe we're tired of the obligatory shape-shifting monsters which inevitably turn up. Gerda's white kitten comes into play here, and our familiar Christmas white Coca-Cola polar bear gets downright nasty.

Critical overthink, the reviewers' contagious virus, might lead you to wonder if the film is part of a plot setting us up for Disney's coming-soon animated version: "Frozen." Disney's is about two sisters, one played by Kristen Bell. But most likely, "The Snow Queen" is just getting in under the wire.

Kids over three will probably not get caught up in the story, especially since most of the characters look like stunned dolls with huge, vapid-looking blue eyes. Medieval type kings and queens doing battle are represented by what could almost be plastic toys moving around. For sophisticated children weaned on clever video games, boredom and distraction seem inevitable, even in a short 80-minute movie. 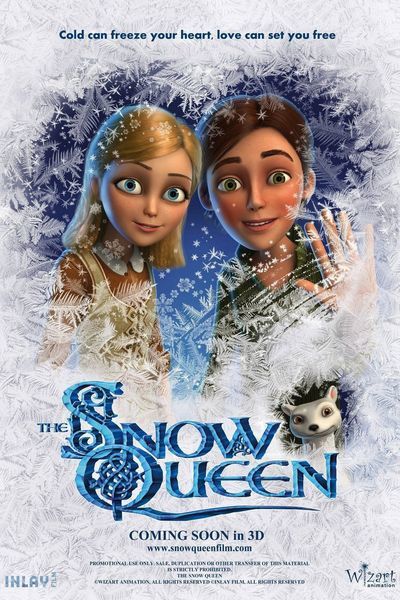