The Secret of NIMH

“The Secret of Nimh” contains that absolute rarity among feature-length animated cartoons, an interesting premise. It is: What if a group of laboratory animals were injected with an experimental drug that made them as intelligent as humans? There have been smart animals in the movies for years, of course, but they were always playing quasi-humans in a universe where the real humans were seen mostly from the knees down. Now here's a story that concerns itself with the problem of being a rat and having a superior intelligence.

Although the idea was what intrigued me about “The Secret of Nimh”, the movie itself represents a philosophical statement for its makers. The animators who made this film were previously employed at the Walt Disney Studios, where they were heralded as the "new breed," groomed to replace the veterans who started with Walt himself and were all past retirement age. But halfway through production of the most recent Disney animated feature, “The Fox and the Hound”, a group of new breeders walked out and, led by director Don Bluth, set up their own shop at MGM.

Their complaint was that Disney was cutting corners on painstaking traditional animating methods. Their vow was to make a non-Disney movie in the old Disney tradition. The main difference between traditional Disney animation and cheaper, newer methods is in the areas of body movements and backgrounds. Bluth and his followers wanted to make a movie in which the characters would have lots of body language (not just moving lips and rolling eyes), and in which the backgrounds would be detailed and interesting, not just repetitive roll-bys. In “The Secret of Nimh”, they have succeeded in reproducing the marvelous detail and depth of the Disney classics. This is a good-looking, interesting movie that creates a little rodent world right under the noses of the indifferent local humans. The story is perhaps a little complicated at first, especially for younger viewers, but a flashback helps make things clear, and then the adventure begins.

We learn that a group of rats and mice was injected with the secret potion in the laboratories of the National Institute of Mental Health, and that they quickly became so smart that they were able to escape from “Nimh” and set up a society in a barnyard. Then they were faced with an ethical dilemma: Should they continue to freeload off of the local humans, stealing grains, supplies, and even electricity or should they set off into the wilderness to establish a new society of their own? This larger story is counterpointed with the saga of a mousy little widow named Mrs. Brisby, whose sick child is threatened by the approach of the tilling machine.

“The Secret of Nimh” is an artistic success. It looks good, moves well, and delights our eyes. It is not quite such a success on the emotional level, however, because it has so many characters and involves them in so many different problems that there's nobody for the kids in the audience to strongly identify with. I guess you could say that the Disney tradition lives, but that the Disney magic still remains elusive. 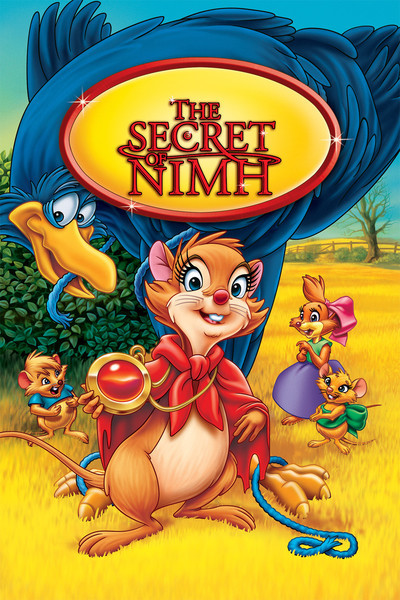