The Fox and the Hound

In all the old familiar ways, “The Fox and the Hound” looks like a traditional production from Walt Disney animators. It has cute little animals and wise old owls. It has a villain in the shape of a mountainous grizzly bear, and comic relief in a long-standing feud between a woodpecker and a caterpillar. And it has songs that contain such uncontroversial wishes as, "If only the world wouldn't get in the way, If only the world would let us play." And yet, for all of its familiar qualities, this movie marks something of a departure for the Disney studio, and its movement is in an interesting direction. “The Fox and the Hound” is one of those relatively rare Disney animated features that contains a useful lesson for its younger audiences. It's not just cute animals and frightening adventures and a happy ending; it's also a rather thoughtful meditation on how society determines our behavior.

The movie is a fable about a small puppy named Copper and an orphaned fox named Tod. At the outset we sense something unusual, after the camera traces a gloomy path through the shadows of the forest, a mother fox and her baby come running terrified out of the woods, chased by hunters and hounds. Will the mother and child escape? They almost do. But then the mother hides her baby and sacrifices her life to draw attention away from him. This is the cruel world, without any magical cartoon escapes.

The little fox is taken under the wing, so to speak, by wise old Big Mama Owl, who arranges for the baby to be adopted by a kindly farm woman. It's at this point that the puppy comes into the plot. Puppy and fox become great friends in their childhoods and pledge to be loyal to each other forevermore. But then the quickly growing hound is taken away to be trained as a hunter, and the next time the two friends meet, the hound is savagely trying to chase down the fox. After they are almost killed by the bear, there is a reconciliation of sorts. They realize (and perhaps the kids in the audience will realize, too) how quickly our better impulses can be drowned out by the noise of society. The message is not heavy-handed, nor does it need to be, because the lessons in the movie are so firmly illustrated by the lives of the animals.

Although “The Fox and the Hound” is the first Disney animated feature to have been made mostly by a newer generation of artists at the studio, the film's look still is in the tradition of “The Rescuers” (1977) and other Disney work in the 1970s. That means we don't get the painstaking, frame-by-frame animation of individual leaves and flowers and birds that made “Snow White” magical back when animator man-hours were cheaper. But we do get a lot of life and energy on the screen.

The star of the movie's sound track is Pearl Bailey as Big Mama Owl. She sings three songs, dispenses advice with a free hand, and struts around in the forest as a sort of feathered Ann Landers. The animators have done a wonderful job of giving their cartoon owl some of Pearlie Mae's personality traits, but the two leading characters (with Mickey Rooney as the fox and Kurt Russell as the hound) are more straightforward.

The bottom line, I suppose, is: Will kids like this movie? And the answer is, sure, I think so. It's a fast-moving, colorful story, and as I watched the animated images on the screen, I was suddenly reminded of a curious belief I held when I was a kid. I believed that cartoons looked more real than "live" features, because everything on the screen had sharper edges. I outgrew my notion, but I'm not sure that represents progress. 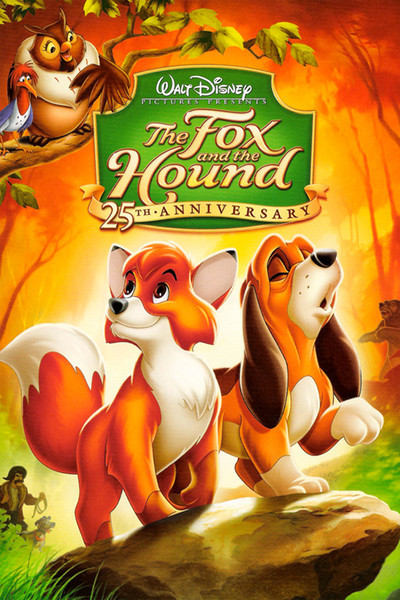