“Harry Potter” meets “Descendants” with a dash of “Romeo and Juliet” in “The School for Good and Evil.” And yes, it is as overstuffed as that sounds.

This massive, magical adventure is also way too long at 2 ½ hours, but rarely in that running time do we see any glimmers of the kind of singular filmmaking wizardry that usually makes Paul Feig’s movies so engaging. He’s once again telling a story of female friendship, with all its highs and lows and particular complications, as he has with “Bridesmaids,” “The Heat,” and “A Simple Favor.” And, of course, the clothes are dazzling; the famously sartorial director would never skimp in that department.

But all of these potentially effective elements—as well as a stellar cast that includes Charlize Theron, Kerry Washington, and Michelle Yeoh—get swallowed up by the overwhelming reliance on CGI-infused action sequences. They’re both empty and endless, and too often leave you wondering what’s going on and why we should bother.

Based on the best-selling children’s book series by Soman Chainani, “The School for Good and Evil” focuses on two extremely different teenage best friends looking out for each other in a harsh, fairy-tale land. The petite Sophie (Sophia Anne Caruso) is a blonde Cinderella figure with dreams of becoming a princess; she escapes the doldrums of daily life with a mean stepmother by talking to woodland creatures and designing flouncy gowns. The much taller, wild-haired Agatha (Sofia Wylie) lives with her mom in a cottage in the forest, where they concoct potions together; she has a hairless cat named Reaper and dresses in all black, so she must be a witch. These simple, early moments when the girls enjoy their warm, humorous bond—with the help of richly honeyed narration from Cate Blanchett—are the film’s strongest. The dialogue in the script from co-writers David Magee and Feig is snarky in a way that’s both anachronistic and au courant, but Caruso and Wylie make their friendship feel true.

But one day, a giant bird picks them up and swoops them away to The School for Good and Evil: side-by-side castles connected by a bridge where the next generation of magical young people learns to hone their skills. As we see in the film’s prelude, a pair of brothers established this balance long ago; neither side can win completely, and this enchanted institution ensures that. Naturally, Sophie assumes she’ll end up on the sunny side of the divide, while Agatha will go to the structure shrouded in fog. But when the bird drops Sophie on the evil side and Agatha on the good side, they figure it must have been a mistake and struggle to switch places. In no time, though, their true natures reveal themselves—the ones they’d buried beneath the hair and clothes they’d chosen and the labels society had pinned on them.

This is a potentially interesting idea, and a great opportunity for kids to learn about the insidious power of prejudice. And the production design on both sides is enjoyably over-the-top in its contrasting extremes: the School for Good essentially looks like a wedding cake you could live inside, while the School for Evil is like a goth version of Hogwarts. Costume designer Renee Ehrlich Kalfus—who also designed the clothes in Feig’s sharp and sexy “A Simple Favor”—makes the dresses these young women wear not just distinct in vivid and inspired ways, but they evolve accordingly as Agatha and Sophie tap into their authentic selves.

Again, lots of intriguing pieces here, and we haven’t even mentioned Washington as the perpetually perky head of the good school, with Theron vamping as the evil school’s leader. There’s just so much going on in this movie in terms of plot and visual effects that supporting players like Yeoh and Laurence Fishburne get frustratingly little to do. The film also squanders the talents of Rob Delaney and Patti LuPone early on in blink-and-you’ll-miss-them roles. The script consistently gets bogged down in world-building exposition and flashbacks—the mythology of how this place works is dense and not terribly compelling—and there are so many students on both sides of the bridge that there’s little opportunity for characterization. Chainani wrote a series of these books, where he had much more time and space to expand. Here, fellow students are whittled down to a single trait, and—as in the Disney “Descendants” movies—most are the offspring of famous cultural figures, like Prince Charming, King Arthur, and the Sheriff of Nottingham. A forbidden romance between Sophie and the hunky Tedros (Jamie Flatters) is just one more subplot in a film full of them. And a dizzying array of twists awaits as the movie hurtles toward its conclusion.

Somewhere beneath all the noise and mayhem—the hurled fireballs, swirls of blood and duels with glowing swords choreographed to Billie Eilish and Britney Spears tunes—“The School for Good and Evil” aims to upend familiar tropes and unearth some useful truths. The popular clique at the good school is packed with mean girls; the weirdoes and misfits at the bad school are actually loyal and kind. Being ambitious isn’t necessarily a negative thing, while going along to get along might not be the right path, either. But with a series of endings that drags out the film’s already significant length, it takes a while for anyone to achieve any sort of happily ever after. 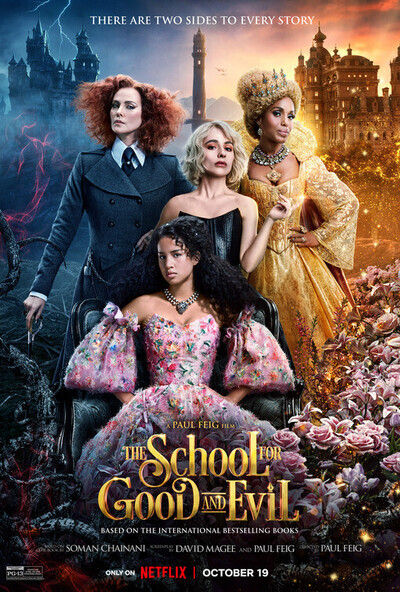 Rated PG-13 for violence and action, and some frightening images.

Laurence Fishburne as The Schoolmaster