With "A Separation" (2011), director Asghar Farhadi made what was to become the Iranian cinema's greatest international success, a worldwide hit that garnered numerous high-profile awards culminating in Iran's first-ever Best Foreign-Language Film Oscar. The film seemed to position its creator as an artist ready to leap from Iran onto the world stage, a promise handsomely fulfilled in its French-made follow-up, "The Past," another brilliantly mounted drama concerning fracturing families, hidden motives and the difficulties of attaining stability in a rapidly changing world.

Previous Iranian directors to achieve international renown evidenced strong ties to their nation's culture, especially its traditions in poetry, philosophy, literature and cinema. Farhadi by contrast, who came out of the theater and has cited influences such as Tennessee Williams, seems more readily adaptable to cultures beyond his own. And while "A Separation," which depicted a couple splitting up because the wife wanted to escape Iran, was viewed as a critique of current conditions in his native land, Farhadi seems to have little interest in politics or the kinds of cultural analyses offered in what he has called "films that try to explain Iran to the world." The one country that really seems to interest him is the human heart.

Of the three main adult characters in "The Past," one is Iranian, one French and one Arab. While it wouldn't be accurate to that these cultural identities are entirely unimportant—Farhadi wants to register the flux of nationalities in our increasingly globalized world—they are not the film's main subject, any more than conditions in Iran were in "A Separation." This time the borders that concern him most are those separating past, present and future, and the film's title accurately pinpoints the area that threatens to dominate and destabilize the other two.

The story opens as Ahmad (Ali Mosaffa) returns from Tehran to Paris to help his wife Marie (Berenice Bejo) finalize their divorce. The two had lived together in France but have been separated for several years. From the first it's evident that there's still a skein of emotion connecting them, a mix of residual affection and resentment, but now Marie wants to move on by marrying Samir (Tahar Rahim), a laundry owner who has a more traumatic unresolved relationship hovering over him: his wife, who tried to commit suicide, lies in a coma. (The film never explains how Samir could remarry with his wife still alive; one must assume that French law permits this in certain circumstances.)

Once Ahmad and Marie reach her home outside Paris, we see that the adult threesome's drama involves three children as well. Though Marie and Ahmad had no kids, she has two daughters by a previous marriage and the elder, Lucie (Pauline Burlet), a teenager, appears to have a warmer regard for her former stepdad than she does for either her mom or Samir, whose relationship she disdains even though it emerges that the couple is expecting a child. Marie's younger daughter, Lea (Jeanne Jestin), meanwhile, has found an agreeable playmate in Samir's young son Fouad (Elyes Aguis), who spends lots of time at Marie's house due to his mother's hospitalization.

These are the main human elements in Farhadi's story, and for nearly an hour, the drama proceeds by examining in ever-greater depth the complex emotions and concerns that connect all six characters. Then, suddenly, there's a revelation that shifts the story to an even deeper level; it won't be the last.

Please note that there are no spoilers ahead, because the tale's surprises deserve to be encountered afresh. Suffice it to say that one of Farhadi's claims on being among the world's great auteurs currently lies in his superlative skills as a dramatist, which bring to mind not only the intricate narrative constructions of, say, Fassbinder and Almodovar but also theatrical progenitors ranging from Ibsen and Chekhov to Pinter.

His particular stamp can be seen especially, I believe, in two attributes of his recent films (including the superb "About Elly," 2009). One might be called the "glass onion" effect. It comprises Farhadi's way of plotting his stories so that watching them is like witnessing layer after layer of human mystery being peeled away, with the result that we are drawn ever more deeply into sympathizing with the characters. The concomitant attribute could be termed the stories' multi-perspectivalism, which involves our being induced to see things from the perspective of one character, then another, and so on, rather than only one throughout. In "The Past" we begin viewing Marie's fraught domestic situation from Ahmad's vantage point, which later shifts to Marie's and later still to Samir's—with the viewpoint of the sullen, resentful Lucie being woven in at crucial points too.

These techniques combine to such powerful effect in large part due to Farhadi's meticulousness as an artist. Though in "The Past" he's working in French, a language he doesn't speak, the nuances in every line of his script seem precisely calibrated. Likewise, though he shifts his visual approach from the mostly handheld kineticism of "A Separation" to one of mostly static and panning shots, the subtleties and shadings in the camerawork of Mahmoud Kalari, one of the world's great cinematographers, beautifully support the drama's gradually unfolding complexities.

Then there's Farhadi's extraordinary skill with actors, which here produces not only three strikingly modulated and complementary performances by Bejo (who won the Best Actress prize at Cannes), Mosaffa and Rahim, but also further evidence of Farhadi's trademark gift with young actors. All three who play the children contribute to remarkable moments in the film, including an emotional confrontation in the Paris Metro between Samir and his little boy that's astonishing in both its intensity and its delicacy.

While his drama ultimately proves so persuasive and moving because of how Farhadi makes us understand and care about people who are torn between the lives they've lived and ones they hope to make, an endeavor whose essential purposes are beyond nationality and culture, there's no small resonance in the fact that this story comes from a filmmaker transitioning between the Middle East and Europe—regions where any chances of forward-moving dynamism seem constantly threatened by the burdens of the past. 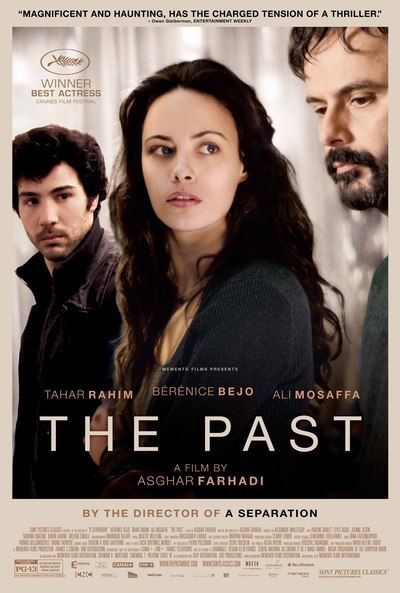