"The Report” explores an alarming period in our country’s recent history: the CIA’s suspect detention and interrogation program following the Sept. 11 terrorist attacks. Writer/director Scott Z. Burns’ intention is clear in illuminating the complicated and covert strategies employed, but the story he’s telling isn’t a naturally cinematic one.

This is a movie about a 6,700-page report that was five arduous years in the making. And while Burns eventually relies on a flashback structure to bring these deeply disturbing moments of cruelty to life, a great deal of “The Report” consists of people sitting around Washington D.C. offices and conference room tables in suits, explaining things to each other and debating policy. Rarely do these scenes crackle. Granted, enormously talented actors are playing these real-life political figures—Annette Bening IS Dianne Feinstein!—but ultimately, the whole endeavor feels like a two-hour information dump, like C-SPAN with a starry cast.

“The Report” is also surprisingly free of tension, given the subject matter; if you’re going to experience any anxiety, it’ll probably come from a sense of worry over whether all of this is going to be on the final exam. For the most part, there’s a simmering sameness to the film’s didactic tone over its two-hour running time. But Adam Driver, being an actor of endless range and versatility, finds unexpected avenues into some pretty dry dialogue throughout this earnest and densely packed drama.

As lead investigator Daniel J. Jones of the Senate Intelligence Committee, Driver becomes increasingly agitated and indignant the deeper he digs into the facts. This is helpful, given that he’s our conduit into this jargony, wonky world. The toll of wading through a never-ending sea of documents is evident in his cadence and demeanor over the passage of time. Looking back on his work when he’s under scrutiny at the film’s start, he tells a high-priced lawyer (Corey Stoll) that he was able to devote every day of his life to the report for five years because he had no family or personal relationships. “I wasn’t a very good partner,” he admits in a rare moment of reflection, and it’s a line you could imagine him uttering in the devastating “Marriage Story,” as well. The idealism that inspired him to snap a photo of the Capitol building on his way into a 2003 job interview steadily fades; a reversal of that image at the end, as he’s walking away from the Rotunda and toward the Washington Monument a decade later, finds him looking stoic and defeated on a gloomy day.

Burns jumps around in time between Jones’ discovery of documents detailing myriad and horrific examples of torturing detainees and flashbacks that show us exactly what these so-called “enhanced interrogation techniques” looked like, sounded like, felt like. The drab grays and cool blues of nondescript, secure rooms within monolithic government buildings give way to lurid oranges and garish greens inside the bowels of secret detention sites. We see naked men, hooded and chained, forced to endure the blaring strains of Marilyn Manson, deprived of sleep and, eventually, subjected to waterboarding. It’s as difficult to watch as you’d imagine. But the swaggering Air Force psychologist (Douglas Hodge) who devised these techniques and oversees their implementation only grows more callous throughout this horrifying process—a good ol’ boy with bad ideas.

In between, Jones incrementally reports back to Bening’s Senator Feinstein, who gave him the assignment as chair of the Senate Intelligence Committee. Bening bears the signature hair and glasses of the veteran California Democrat, as well as her deliberate, measured delivery, but she’s mostly stuck in one low-key gear. Jon Hamm, as senior foreign policy advisor (and eventual Chief of Staff to President Obama) Denis McDonough, emerges as a seasoned pragmatist trying to appease both the Senate and the White House. Tim Blake Nelson briefly brings a welcome sense of hushed danger as a quasi-Deep Throat figure for Jones: a physician’s assistant who witnessed many of the horrors that occurred at these secret sites. And the always-great Ted Levine gives a sly spin to his portrayal of former CIA Director John Brennan; he initially seems like the voice of reason but ultimately reveals himself to be a defiant defender of these questionable tactics.

It’s an unimpeachable cast doing solid work with weighty material. If only the film as a whole weren’t so deadly dull. 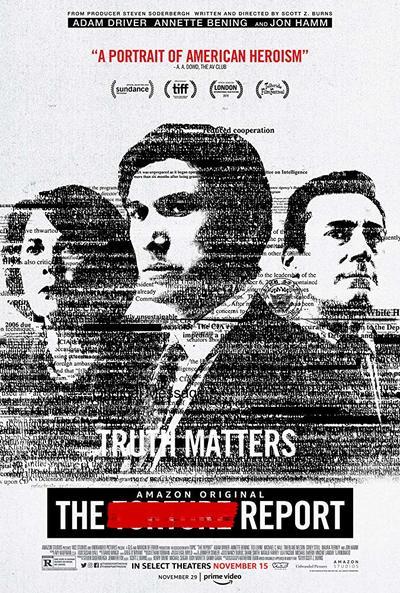 Rated R for some scenes of inhumane treatment and torture, and language.