This site’s founder, the great Roger Ebert, had a pretty good rule concerning screen comedy, to the effect that, if you laugh, the movie is doing its job. You’ve got to show a little humility in the face of that. Hence, I can’t front too hard over "Home Alone," a movie that I have no admiration for in a lot of respects, because the first time I saw it, I laughed like a caffeinated hyena.

I guess the same thing ought to apply to horror movies. A new one, "The Quiet Ones," a PG-13 offering from the revived banner of Hammer, the classic low-budget genre house of the U.K. in the ‘50s, ‘60s, and ‘70s, is not inordinately innovative: its themes of supernatural possession and the challenges of documenting otherworldly phenomena have been done to death, so to speak. The opening "This Movie Is Based On Actual Events" is as old as the hills, too. But I gotta tell ya: I had my fingers in front of my eyes about a half dozen times during this movie. Granted, I was at a late-night screening in a theater with maybe a dozen other people, some of whom could have conceivably been up to no good, so maybe the atmosphere helped. But if you look at a horror movie’s prime directive to be to scare the viewer, there’s no denying that, at times, "The Quiet Ones" got me.

I also admit that I was rather taken with its period trappings. The move begins at Oxford University in the early ‘70s, and stays there. An abnormal psych expert played by Jared Harris has been “studying” a young woman whose psychoses could be demonic possession, or could be a scientifically explainable telekinetic disturbance that can be ejected from the woman and trapped in another vessel. “Cure one and you cure the world,” the utopian prof promises. When the college suspends his funding, he takes his true believers—a couple of attractive, game students, and a less refined young A/V hunk who’s recording the treatment sessions on 16mm—to a deserted manor, the better to isolate the characters as doors open and shut themselves and the power goes out and so on.

The movie’s script, by director John Pogue, Oren Moverman ("Rampart," "The Messenger") and Craig Rosenberg (adapting an earlier work by Tom DeVille) is a little more conspicuously intelligent than most, threading an intriguing sexual jealousy theme into the movie’s narrative mix. That theme doesn’t amount to much as the picture oozes to a mayhem-merry climax, but it ratchets up the tension nicely. The obligatory explanation for all the nastiness mixes "The Exorcist" with "Peeping Tom" in a way that the filmmakers don’t satisfactorily exploit. And "The Quiet Ones"' fetishizing of vintage audio, film, and medical equipment recalls another recent British horror picture, "Berberian Sound Studio." As I fetishize such stuff myself, perhaps that aspect of the movie skewed my sympathies as well. Bottom line, though: I squinted, I looked away, I sank in my seat, I shuddered. For this movie, that means "Mission Accomplished." 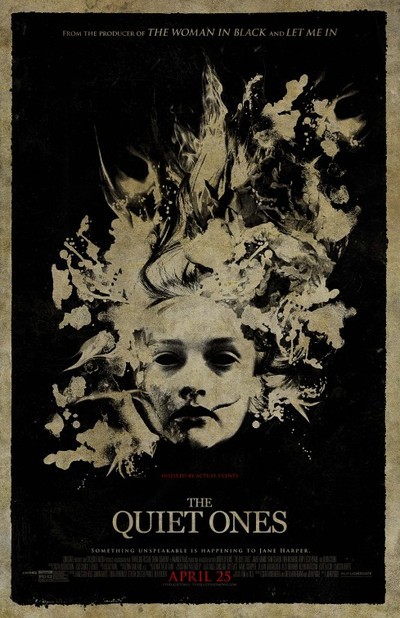