The Queen of Spain

At first she was known as “The Girl of Your Dreams,” and now she is “The Queen of Spain.” Those bombastic, marquee-ready titles are referring to characters played by the great Penelope Cruz in a now-franchise by writer/director Fernando Trueba, who uses Cruz as a type of muse for comic lessons in Spanish film history. As an actress named Macarena Granada, Cruz leads an ensemble cast of people who are trying to make big budget films in different political periods. “The Girl of Your Dreams,” released in 1998, had Macarena and her on-set collaborators dealing with Naziism, at a time when Spanish films were made in Germany.

This sequel focuses on the creation of a Spanish-American film in 1956, after America has started to make productions in Spain, using the country's talent and with the blessing of dictator Francisco Franco. By this time, Macarena has become a Hollywood fixation, even starring opposite Kirk Douglas in one seamlessly rendered fake scene, and has returned to Spain for a production about the “Catholic Queen,” Queen Isabella. She stars opposite a Hollywood fixture named Gary Jones, played with blunt hamminess by Cary Elwes. The production is directed by famed American filmmaker John Scott, who, as portrayed by Clive Revill, is a direct goof on John Ford, eyepatch and all. Mandy Patinkin appears as an American screenwriter who was blacklisted but able to make films in Spain. He takes over directing in fleeting gags about Scott’s inability to stay awake, or sober, while slumped in the director’s chair.

There are other faces working on “The Queen of Spain” that come back from the first movie, like the actress Lucia Grandia (Neus Asensi), Macarena’s assistant Trini (Loses Leon) or production designer Castillo (Santiago Segura). Aside from being reintroduced and then shown conversing at a crew lunch table, they are not up to much during the movie's two-hour running time. Instead, a significant amount of energy for this relatively chaotic production of Spain’s biggest movie yet comes from an assistant director played by Javier Camara, who is new to Trueba’s party but a welcome addition.

There’s an initially interesting story with the return of main character Blas Frontiveros (Antonio Resines), a previous lover of Macarena’s and the director of the film being made in “The Girl of Your Dreams.” He enters this story as a ghost, thought by everyone to be dead, emerging from the shadows after hearing about Macarena's new film. Frontiveros is soon kidnapped by the government and must be rescued, which makes for both null dramatic tension during his captivity (despite being presented as in some type of danger) or the rescue attempt that eventually happens. This thread shares the same milquetoast nature as one with Macarena repeatedly eyeballing a smoldering grip named Leo (Chino Darin), only to start a type of affair that is, like much else in Trueba’s enterprise, hollow.

The focal point for all of this is of course Cruz, who is very good in this movie, as she is in many films, a fact this project seems dedicated to. Not only does she brandish a scientifically-confounding ability to resist aging in a way that no returning cast member can match, but the movie celebrates what creates her utterly luminous presence. And yet, the movie says nothing new about her that can’t be found in other movies, whether it’s creating magnetic close-ups by simply appearing them, acting like a goofball as she does later in "The Queen of Spain," or being a talented actor first and foremost (in this movie, Macarena studied under Strasberg). As a type of tribute to Cruz that collects her many skills into one movie, “The Queen of Spain” makes its tiny impression on movie history. But we don’t need a film like this to tell us that she’s acting royalty.

As for everyone, this is a 19-year reunion that has the airiness of just another episode, as opposed to the immediacy and ultimate quality of a sequel. It doesn’t feel like Trueba really knows what he wants to do with all of these characters, which makes its rare strong comedy more of a fluke: I was amused in particular, yet admittedly didn’t laugh at, a running joke involving actor Julian constantly pinching his private parts in order to make himself cry on camera. But the script is more full of throwaway passages that bid for the cheapest of laughs, like when Elwes carries over the homophobia from “The Girl of Your Dreams” and becomes predatory on Julian, trying to manipulate the Spanish actor with the allure of Hollywood. The movie receives little comic energy to go with its touch-and-go dramatic intentions, creating a showbiz tale that’s far slower than it should be.

With its distinct historical context and low-key slap-happy tone spread across its massive cast, “The Queen of Spain” wants to be light while it presents shenanigans that occur on straight-from-the-history-books film sets. But the storytelling is rarely as inspired as the detail, in which flat scenarios takes place on lavishly re-created soundstages (of which “The Queen of Spain” received a “Best Art Direction” Goya Award nomination, rightfully so). There is a pinch of movie magic in the story as it is dedicated to the rigorous process of making a film, so tasks like matte painting or even setting up tracks for camera shots finally get their close-up. But “The Queen of Spain” can only offer scant entertainment for movie buffs and non-movie buffs alike. 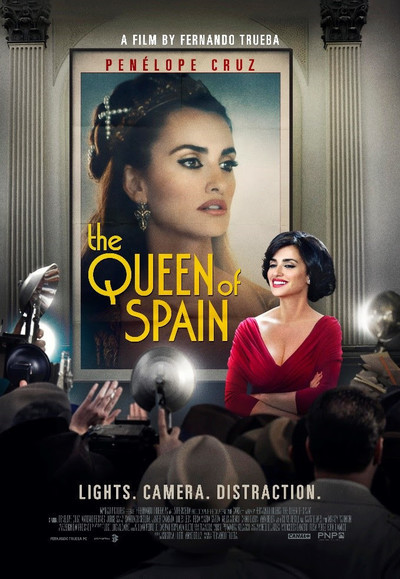